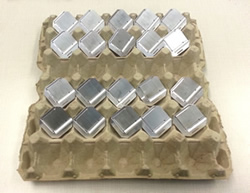 Close-up of 20 WRFs, about three centimeters at their largest dimension. The WRFs are precision machined from aluminum; the thinnest part of the wedge is 140 microns and the thickest part is 2,000 microns. After about 15 NIF shots, individual spectrometers suffer sufficient surface damage and erosion that a new set is usually deployed.

Twenty new wedge range filter (WRF) precision compact proton spectrometers developed at the Massachusetts Institute of Technology have been delivered to NIF. The WRF is one of three diagnostic devices created at MIT that are designed to measure the spectrum and timing of NIF neutrons and protons.

The WRF measures the spectrum of proton energy in the range from four to 20 million electron volts (MeV) using a wedge of filter material placed in front of plastic film. Commonly used on all deuterium and deuterium-helium3-fueled NIF implosions, the WRF proton spectrometers measure the implosion areal density at a time referred to as the "shock flash bang time," which happens about one nanosecond before the main implosion bang time (in ICF experiments, bang time is the time interval between the start of the laser pulse and peak x-ray emission from the fuel core). 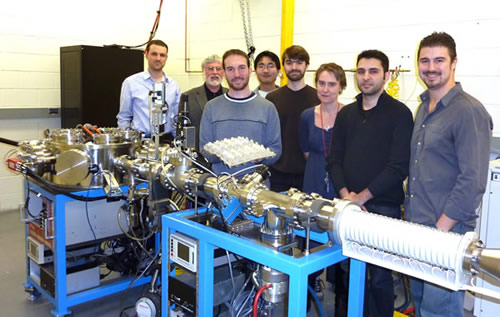 Members of the MIT-NIF team responsible for the development, testing, and calibration of the wedge range filter (WRF) proton spectrometers. PhD student Mike Rosenberg, an active participant in NIF experiments, holds a tray of the spectrometers next to the accelerator used in their final calibration.

Suratwala said that glass material quality (often its surface) limits the energy of many high-peak-power laser systems. During fabrication, post-processing, and laser operation, numerous and complex surface interactions occur that can create, modify, and/or remove surface damage precursors such as microfractures (scratches), chemical impurities, and particulate contamination. These factors can cause localized laser damage via direct absorption and heating or downstream modulation of the incoming laser light.

Suratwala reviewed the science and technology progress and future challenges for understanding these glass surface interactions, the resulting surface precursors, and the methods to mitigate them. He said two process technologies used for NIF – improved grinding and polishing processes to reduce the number of microfractures on the optic's surface and a novel buffered oxide etch process called the Advanced Mitigation Process on fused silica optics – have greatly improved the laser damage resistance of fused silica optics. Combining these more damage-resistant optics with NIF's "Loop" strategy for recycling optics has enabled NIF to operate at higher energy (1.8 megajoules) and power (500 terawatts). 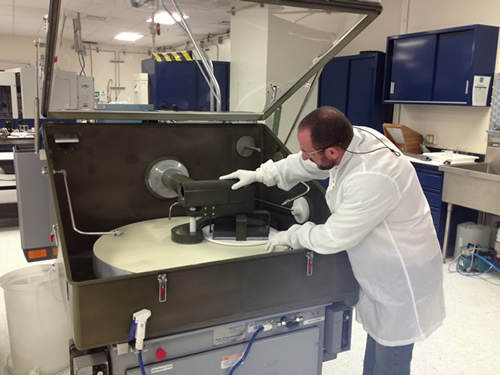 The future manufacturing challenge, he said, is to create largely scratch-free optical surfaces while reducing finishing cost (the photo shows a polisher being developed to accomplish this). Large opportunities also still exist to improve the surface damage resistance even further. Suratwala said the future challenges of laser damage initiation and growth during laser operations include identifying and mitigating even higher-fluence (energy per unit area) precursors and developing a greater understanding of multi-shot changes and debris-induced effects to glass surfaces during laser shots.

In his welcoming remarks, NIF Director Ed Moses said the committee is "an essential element of NIF governance" that plays a "critical role in helping establish a first-rate fundamental science program at NIF." After briefings on NIF's status and experimental path forward, the committee discussed a variety of research under way or planned on NIF, from carbon and iron equations of state to hydrodynamic and radiative shock effects in supernovas. 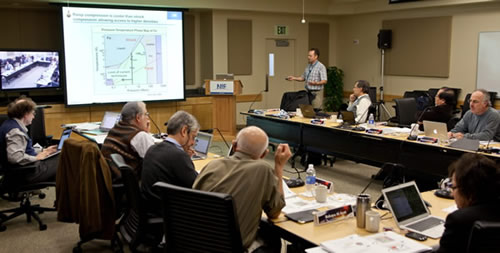 New simulations of inertial confinement fusion (ICF) experiments indicate that in the inner gas of an ICF target, ions of deuterium and tritium, the hydrogen isotopes in fusion fuel, may separate as they converge toward the center. The result of this "species separation," according to a Physics of Plasmas paper published online on Jan. 3, could be that deuterium and tritium ions arrive at the target's center at different times, reducing the amount of neutrons produced during the first stage of an ICF implosion.

LLNL researchers and their collaborators used multi-fluid particle-in-cell simulations to show that as the spherical shock wave propagates through the inner gas of an ICF implosion and converges toward the center of the target, deuterium ions (deuterons) may "run ahead" of the tritium ions (tritons) due to their lower mass and higher charge-to-mass ratio, and could reach the center several tens of picoseconds before the tritons. The rising edge of the deuterium and tritium fusion rate may also be temporally separated by the same amount, an effect which should be observable in experiments by measuring the time differential between the deuterium and tritium shock yields.

The researchers said the implications of species separation for current NIF ignition experiments are under investigation. "Since the actual separation between ion species is closely dependent on the correct modeling of the collision physics, fully kinetic (particle-in-cell) simulations of ICF experiments are needed to further investigate the effects of multi-species," they said. "This work suggests the need for adapting mainline ICF simulations to include ion separation and kinetic effects in mixed species fuels."

Lead author Claudio Bellei was joined by LLNL researchers Peter Amendt, Scott Wilks, and Daniel Casey, along with colleagues from the Blackett Laboratory of Imperial College in London, the Plasma Science and Fusion Center at MIT, and Voss Scientific of Albuquerque, NM.

Stimulated Raman scattering (SRS) is a type of laser-plasma instability of concern for laser-driven fusion experiments such as those now under way at NIF. In SRS, electron density fluctuations in the plasma cause the incident laser light to scatter resonantly. High levels of backscatter reduce the coupling of laser energy to the fusion target and place stringent constraints on implosion symmetry and other design parameters.

By studying the relationship between speckles and SRS, the researchers found that in a multi-speckled laser beam, intense speckles exhibit nonlinear SRS behavior first and produce both forward and side-loss high-energy ("hot") electrons, which seed and enhance the growth of SRS in neighboring speckles. This collective interaction results in significant SRS at lower average beam intensity than it would otherwise, and SRS backscatter at angles outside that of the incident beam cone, similar to what is observed in experiments.

The researchers said the inclusion of a moderately strong magnetic field in the laser direction can effectively control SRS by suppressing transverse speckle interaction via hot electron transport. While the size of the magnetic field may not be practical in ignition experiments, they said, "this technique allows hot electron coupling effects to be distinguished from light wave coupling in simulations."

Lead author Lin Yin of LANL was joined on the paper by several LANL colleagues and by LLNL's Bob Kirkwood and Pierre Michel.

NIF Director Ed Moses reviewed the accomplishments of the NIF & Photon Science Directorate in 2012 and described the Directorate's programs, plans and challenges for the New Year in a series of All-Hands meetings on Jan. 16. Describing 2012 as a "spectacular" year for the Directorate, Moses said NIF conducted 180 target physics experiments and another 150 laser shots without targets in fiscal year 2012, and the facility is now undergoing a transition into "the world's preeminent high-energy-density user science facility" for conducting Stockpile Stewardship, fusion energy, national security applications, and fundamental science experiments.

Moses outlined a reorganization and program consolidation now under way with the goal of creating a "stronger, more flexible organization" that will carry NIF&PS into the future. While the fiscal year 2013 Federal budget remains somewhat uncertain because of sequestration and the like, he said, "We have prepared in the best way we can for this situation."

Although challenges remain in achieving the implosion symmetry and pressure needed for ignition, Moses said researchers are now experimenting with different hohlraum configurations in an effort to resolve those issues. Moses noted that the National Ignition Campaign, which concluded at the end of September, made "enormous progress" in developing the NIF ignition platform while building a large national and international family that continues to pursue the "grand challenge of demonstrating fusion ignition and burn via ICF (inertial confinement fusion) on NIF."

Intense, beamlike emissions of greater-than 10 MeV (million electron-volt) protons can be generated from a solid foil target. One application of this technology is the use of laser-driven proton beams to ignite a fast-ignition (FI) target (in fast ignition, a pulse of energy is fired into the center of the compressed fusion fuel to ignite the fusion reaction). The beam can be focused from a relatively large target to a small spot size (tens of microns) with an extremely high energy density. This eases the requirements on laser focus and intensity and permits design for both the optimum particle energy and the requisite particle beam density for FI.

In a Physical Review E paper published on Jan. 25, LLNL researchers and their collaborators reported on studies of acceleration and focusing of high-energy proton beams from FI-related hemisphere-cone assembled targets. The studies used hybrid particle-in-cell simulations to investigate the dynamics of proton-beam acceleration and focusing from planar-foil, open-hemisphere, and hemisphere-cone target geometries by intense laser pulses. The researchers said the results are of great interest for proton fast ignition point design and other applications in high-energy-density physics.

A daylong series of special events on Jan. 24 honored LLNL's fourth director, Johnny Foster, who turned 90 last September. Foster remains active as a consultant on a range of national security issues and continues to advise the Laboratory's senior leadership. 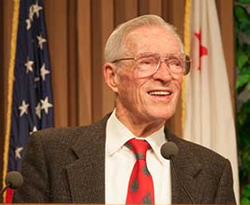 Johnny Foster addresses the crowd during his 90th birthday celebration.

Foster was LLNL Director from 1961-65, when the Laboratory launched a small laser fusion project in its physics organization. The project focused on building more powerful and efficient lasers, exploring basic aspects of light-plasma interactions, and developing high-power, short-pulse lasers. These early efforts led to the development of the 4 pi laser system in the mid-1960s, which had 12 ruby laser beams arranged around a gas-filled target chamber about 20 centimeters in diameter.

A variety of subsequent laser efforts were consolidated in 1972 with the formation of the Laser Program and Y Division (now the NIF & Photon Science Directorate), and LLNL has gone on to construct a succession of record-setting lasers, culminating in the construction and operation of NIF, the world's largest and highest-energy laser system. 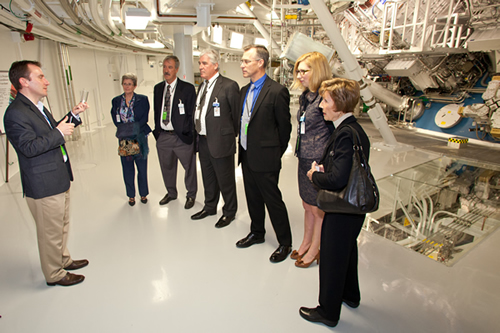 NIF&PS 'Goes Green' in More Ways Than One

Thanks to the initiative of Facility Point of Contact Barbara Macchioni and the support of Heather Ottaway and Meg Fratanduono of the Lab's Environment, Safety, and Health Directorate, the NIF&PS annual Holiday Potluck and Silent Auction was a "Green Event" in every sense of the term. Not only did the Silent Auction raise about $6,000 to help provide a brighter holiday for 13 families in the Livermore and Tracy areas, 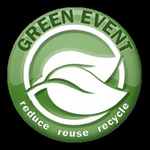 but the use of reusable, recyclable and compostable materials – and their proper disposal in clearly marked containers – kept the amount of waste going to landfills to a minimum.

LLNL's Green Event Planning Guide notes that the ultimate aim of "going green" is to make our actions sustainable – using less of everything now so that it lasts longer, and choosing to use products, suppliers or procedures that have less of an impact on the planet. "Incorporating sustainable planning into your organization's events," say the guidelines, "ensures that all facets of events management, including location, transportation, food services, energy use, and the provision of materials are approached with the goal of minimizing the negative environmental impacts from conducting the event."

The final Green Event tally showed that NIF&PS participants filled 12 23-gallon bags (276 gallons) with compostable material, two 32-gallon and one 23-gallon bag (87 gallons) with recyclables, and only ¼ of a 32-gallon bag (8 gallons) with garbage. "So, 363 gallons (about 300 pounds) of waste was diverted from the landfill," noted Heather and Meg, "and only 2 percent of the total was garbage. This event happened because Barbara took the initiative," they said; "we were simply there to help back her up. And we would be happy to assist others with similar events." 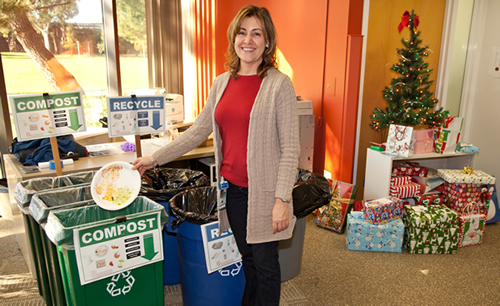 Barbara Macchioni, Facility Point of Contact for Bldgs. 490 and 591, disposes a paper plate in a compost container during the NIF&ampPS Holiday Potluck and Silent Auction. 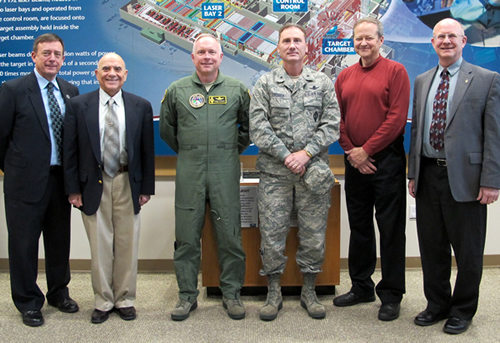