Betatron x-ray radiation, produced when relativistic electrons oscillate in a beam-driven or laser-driven plasma channel such as in a laser wakefield accelerator (LWFA), is a high-energy x-ray source holding great promise for future high energy density experiments on NIF. Betatron x rays are ultrashort, directional, spatially coherent, and broadband, making them highly attractive as a probe.

In a Physical Review Letters paper published online on Dec. 4, LLNL researchers and collaborators presented the first measurements of the angular dependence of the betatron x-ray spectrum produced by electrons inside the cavity of a LWFA. A tomographic reconstruction of electron trajectories sheds light on the dynamics of the electrons as they gain energy in the wakefield, the researchers said. 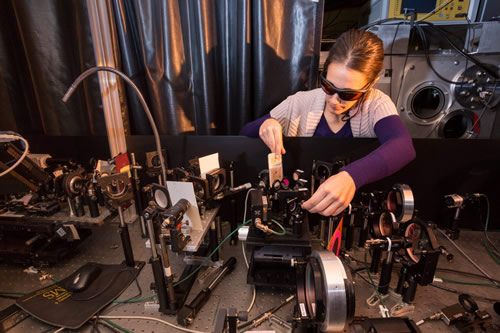 Using a stacked image-plate spectrometer with differential filtering, the researchers observed betatron x rays with energies extending up to 80 keV. "Characterizing the angular dependence of the betatron x-ray spectrum is important for near-term single-shot HED experiments…where spatially-resolved spectral mapping of the beam is needed," the researchers said.

Edwards said the principal issues that emerged during the National Ignition Campaign – target capsule instability and asymmetric hot spots during ICF implosions – turned researchers’ attention toward developing a deeper understanding of target behavior and improved predictive capability through the development of new experimental platforms. He noted that the high-foot (high initial laser pulse) design used in recent experiments "achieved the goal of an implosion that performs closer to simulations" while producing record neutron yields and significant alpha heating. Edwards said NIF's path forward involves a series of focused experiments to address the challenge of achieving both the implosion symmetry and velocity needed for ignition.

Also at the FPA meeting, Tom Anklam gave a presentation on laser inertial fusion energy titled, "Pathways to Fusion Beyond NIF"; and Prav Patel participated in a discussion of the DOE program in high energy density physics.

NIF&PS researchers Steve Langer and Denise Hinkel have been awarded 200 million core hours on two of America's fastest supercomputers dedicated to open science as part of the Department of Energy's INCITE (Innovative and Novel Computational Impact on Theory and Experiment) program.

A multi-laboratory committee that is developing a plan to enhance NIF operating efficiencies and increase the facility's shot rate over the next three years met at the Laboratory on Dec. 5. The 75-member committee includes representatives from Los Alamos and Sandia national laboratories, the Laboratory for Laser Energetics (LLE) at the University of Rochester, and General Atomics of San Diego.

The committee's goal is to determine "how to continue the transformation of our world-class laser facility into a world-class user facility," said Acting NIF & Photon Science Principal Associate Director Jeff Wisoff. "To accomplish this, we need to provide more shots to the users and streamline the integration of experiments onto NIF," he said. 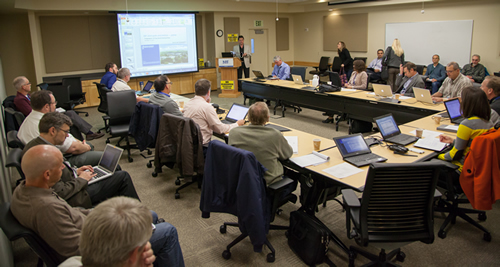 An experimental platform used to measure materials compressed to multi-megabar (Mbar) pressures was described by LLNL researchers and a collaborator in a Review of Scientific Instruments paper published online on Dec. 12.

In an August 2013 Physical Review Letters paper, the researchers had reported on the use of dynamic compression by multiple shocks to compress iron up to 5.6 Mbar, the highest solid-state pressure attained for iron in the laboratory. Extended x-ray absorption fine-structure (EXAFS) spectroscopy was used for simultaneous density, temperature, and local-structure measurements for the compressed iron; these were the first EXAFS measurements above 1 Mbar.

XAFS is a powerful tool widely used in material science; its sensitivity to local atomic structure makes it possible to study chemical bonding and certain phase transitions in solid, liquid, and amorphous matter. The Review of Scientific Instruments paper describes the multi-shock drive and implosion backlighter developed for XAFS measurements on materials compressed to multi-Mbar pressures. A quintuple-crystal design was used to enhance the efficiency of the x-ray spectrometer, enabling observation of very weak EXAFS signals in a single shot.

The broad bandwidth and brightness of the x-ray backlighter offer the opportunity to study a wide range of materials, the researchers said. The platform also can be scaled up to larger laser systems such as NIF to reach even higher pressures. Lead author Yuan Ping was joined by LLNL colleagues Damien Hicks, Federica Coppari, Jon Eggert, and Rip Collins and by Barukh Yaakobi of LLE.

The experimental setup for EXAFS measurements on the OMEGA laser system at the University of Rochester. The data were recorded by the VISAR (Velocity Interferometer System for Any Reflector) diagnostic.

CBET, controlled by applying a wavelength separation between cones of laser beams, is required to control symmetry during peak power. The researchers demonstrated that early-drive asymmetry can be minimized and tuned to better than 1 percent accuracy by varying the relative input powers between different cones of beams.

The experiments also provided first time-resolved measurements of CBET in hohlraums, performed during the first two nanoseconds of the laser drive, which are in good agreement with radiation-hydrodynamics calculations including a linear CBET model. Due to differences in hohlraum plasma conditions, the data show inner-beam multipliers due to early-time CBET that are similar to peak power despite 30 times lower laser intensity.

The 2013 holiday season gave members of the NIF & Photon Science Directorate a variety of opportunities to display their holiday spirit: 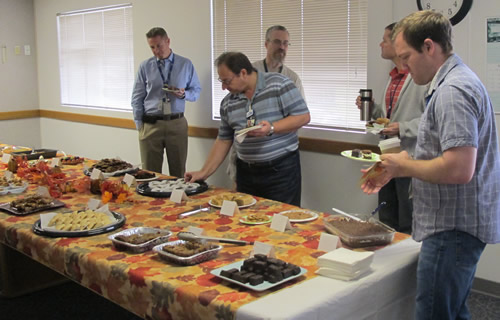 Employees enjoy the treats at the “Bake & Taste” fundraising event.

Gioconda thanked the employees for their dedication to completing their certification requirements. "All of these folks have day jobs," he said, "and the extra effort they took to complete certification deserves special recognition." 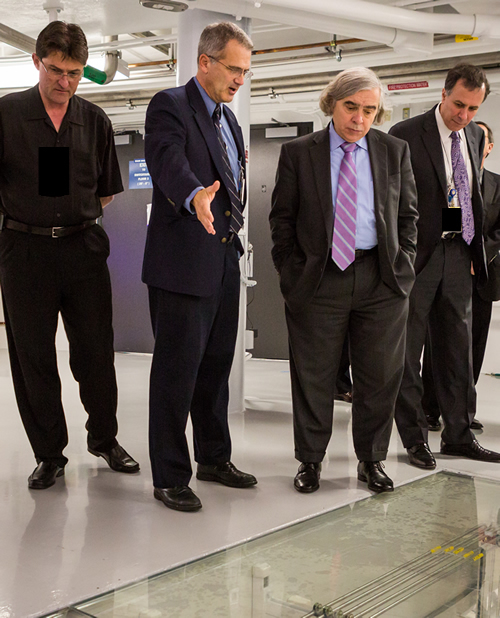 NIF Operations Manager Bruno Van Wonterghem (left) and NIF&PS Acting Principal Associate Director Jeff Wisoff brief U.S. Secretary of Energy Ernest Moniz and Dimitri Kusnezov of the National Nuclear Security Administration (right) during a Dec. 3 tour of NIF. Members of the Secretary of Energy Advisory Board (SEAB) also toured the facility during a two-day visit to the Laboratory. Among those briefing the SEAB were Rip Collins on the NIF science program and A.J. Simon on energy topics.