“This is an amazing honor, and I am humbled to represent the NIF and LLNL teams,” Ma said. “Thank you to everyone who has and continues to support, motivate, teach and encourage me—I feel incredibly lucky to get to work here at LLNL.”

The Thomas H. Stix Award honors an individual researcher who has made outstanding theoretical, experimental, computational, or technical contributions in plasma physics early in his or her career. It was established in 2013 by a contribution from the APS Division of Plasma Physics (DPP). Ma will receive a $2,000 stipend and a certificate when the award is presented at the DPP’s 58th annual meeting in San Jose. The meeting will take place from Oct. 31 to Nov. 4.

Ma earned her bachelor’s degree in aerospace engineering from Caltech in 2005 and received her master’s degree in 2008 and PhD in 2010, both from the University of California, San Diego.

Following graduate school, Ma completed a postdoc at LLNL before becoming a staff scientist in 2012, where she now leads many of the ICF experiments at NIF. Ma was responsible for developing an x-ray imaging diagnostic (the Ross Pair Filters) and established a methodology for determining hydrodynamic mix and pressure in NIF implosions. She currently heads the X-Ray Analysis Group for the ICF program and has authored or co-authored more than 110 peer-reviewed journal publications.

Ma also is active in the Laboratory’s community outreach programs, participating in school visits, Science on Saturday presentations, and the annual Expanding Your Horizons programs for girls in grades 6-9.

Ma recently received the Presidential Early Career Award for Science and Engineering (PECASE), the highest honor bestowed by the U.S. government on science and engineering professionals in the early stages of their independent research careers.

Rosenberg, now a research associate at the University of Rochester’s Laboratory for Laser Energetics (LLE), was the second PhD candidate in the NIF-MIT program; he defended his thesis in the fall of 2014. He was followed in the program by Alex Zylstra, now a Reines Fellow at Los Alamos National Laboratory, and Hans Rinderknecht, a Lawrence Fellow at LLNL. Seven more PhD candidates currently are participating in the NIF-MIT program. 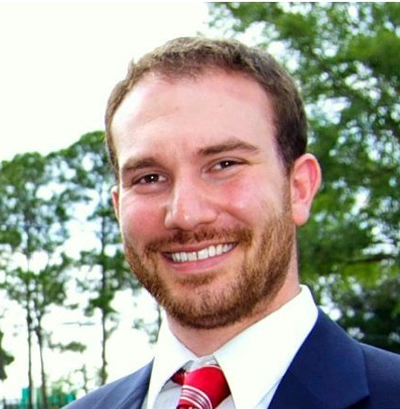 The Rosenbluth award was created to “provide recognition to exceptional young scientists who have performed original thesis work of outstanding scientific quality and achievement in the area of plasma physics,” the APS said. It consists of $2,000 and a certificate to be presented during the DPP’s annual meeting, to be held from Oct. 31 to Nov. 4 in San Jose.

Rosenberg’s thesis was cited for the “first experimental demonstration of the importance of kinetic and multi-ion effects on fusion rates in a wide class of inertial confinement fusion implosions, and for use of proton diagnostics to unveil new features of magnetic reconnection in laser-generated plasmas.”

Rosenberg received his B.A. in physics with high honors from Swarthmore College in 2008, conducting research in spectroscopic analysis of photoionized laboratory plasmas. He continued his studies in plasma physics at MIT, joining the High Energy Density Physics (HEDP) Division, led by Rich Petrasso, at the Plasma Science and Fusion Center.

His dissertation research spanned multiple areas in HEDP and fundamental plasma physics, including the demonstration of ion kinetic effects over a range of plasma conditions in shock-driven laser inertial confinement fusion (ICF) implosions as well as the investigation of magnetic reconnection using laser-generated plasmas in the strongly flow-driven regime.

The thesis combined data from NIF and the Omega Laser Facility at the University of Rochester from both direct- and indirect-drive implosions, and exploited techniques and instruments developed at the MIT HED Accelerator Facility. Rosenberg’s NIF data focused on exploding pusher shots of deuterium-helium-3 (D3He) and deuterium-deuterium (DD)-filled capsules for studies of kinetic and multi-ion effects—physics processes that are not usually included in NIF’s average-ion radiation hydrodynamics codes.

The shots were primarily for diagnostic development, but Rosenberg was able to utilize them for physics research. One of his most important findings was that the experimental yield from D3He exploding pushers is up to two orders of magnitude lower than predicted by average-ion radiation hydrodynamics codes. This dramatic drop in yield compared to simulation is largely due, not to traditional hydrodynamic mix to which such effects are often attributed (as in “conventional” ablatively-driven implosions), but rather to kinetic and multi-ion effects. Rosenberg was lead author of a Physics of Plasmas paper based on this portion of his thesis published on Dec. 29, 2014 (see “Studying Ion Kinetic Effects in NIF Implosions”).

“Congratulations to Mike and to everyone at NIF, LLE, and MIT who contributed to the research described in Mike’s thesis,” said NIF Director Mark Herrmann. “This research has motivated continued development of kinetic models of ICF implosions, which may be especially pertinent at the high-temperature, moderate-density conditions present at shock burn in both exploding pushers and the shock-convergence phase of ablatively-driven implosions. The work also has formed the basis for the development of a new D3He monoenergetic proton backlighter platform for NIF Discovery Science collisionless shock, stopping power, cosmic magnetic field, and hohlraum fields backlighting experiments,” Herrmann said.

Rosenberg is currently working with LLNL and LLE colleagues on the Megajoule Direct-Drive campaign, part of the national direct-drive program, where the goal is understanding laser-plasma interaction physics in the large hot plasma corona of ignition direct-drive targets.

NIF & Photon Science Summer Scholar Michael Sherburne is an Air Force ROTC cadet studying electrical engineering at Virginia Tech. He is among more than 900 students from universities nationwide and around the world, including 52 in the NIF & Photon Science Directorate, who are engaged in work-study employment opportunities at LLNL this summer. The LLNL student internship program is designed to allow students to engage in work-study employment opportunities in relevant science, technology, engineering, mathematics (STEM) and administrative fields during the summer academic break. 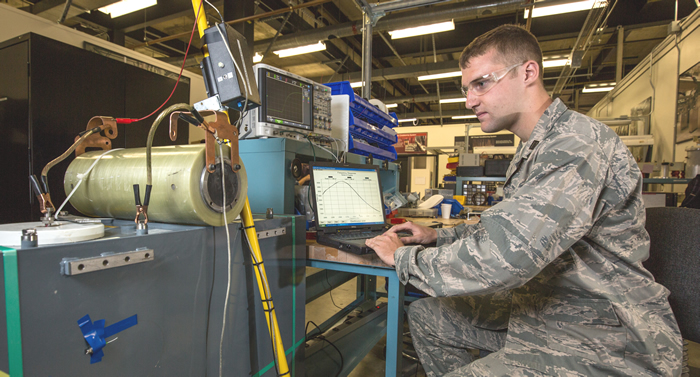 What interested you in pursuing a summer internship at the Laboratory?

Our Air Force ROTC cadre distributed a flier via email and it said you can do cool research. I started to find out more about the Lab and applied. I initially had interest in applying for this opportunity due to the pulsed-power work I am doing with my undergraduate research at Virginia Tech in plasma propulsion and fusion.

What are you working on at the Laboratory?

I am working on an early warning system for capacitors undergoing failure before it becomes a major issue for the National Ignition Facility. It uses a radio-frequency sensor that measures the capacitance of a capacitor, or how much charge it can hold. It checks to see if the capacitance changes, because any changes could be an indicator that the capacitor is starting to become unstable (See Power Conditioning).

What do you enjoy most about interning at the Laboratory?

When I first started interning at the Laboratory, I noticed how the environment is a college campus with a military-like atmosphere. Everyone really cares about each other here, and looks out for their safety. I also am really impressed by how much the supervisors care about their employees’ well-being and professional growth. On top of that, being able to talk to other employees at the Laboratory to exchange ideas, and always learn something new every day. 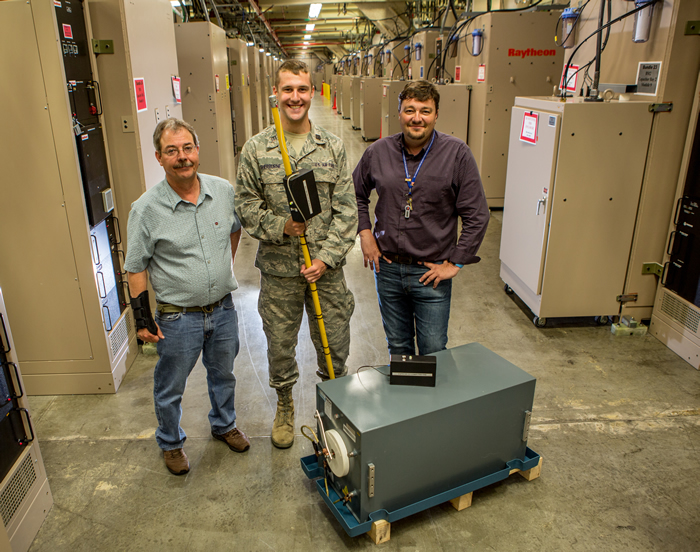 What have you learned (or are learning) that has made a difference to you?

Honestly, I have learned many critical engineering skills that will never be taught at university. There are too many to list, but I will talk about a few. I have been learning Creo Parametric 2.0 CAD software, which has made it a lot easier to design solutions, along with learning how to simulate large scale schematics on LTSpice, and learning from our technicians how to do surface-mount device soldering and professional soldering methods.

Where do you see yourself after graduation? What is your dream job?

I hope to commission into the USAF as a second lieutenant and work as a research officer after graduation, hopefully related towards DOE work. I am looking at AFIT (Air Force Institute of Technology) for graduate school. Afterward, I can see myself working back at LLNL, and may someday want to start my own engineering business. I ultimately have a long-term desire in running for a political office later on, since engineers and scientists are under-represented in Congress, which affects all of our funding and our ability to be the cutting-edge in research.

Who/what has inspired you to pursue an education and career in a STEM field?

My brother, Matthew Sherburne, who is an electrical engineer, is my biggest inspiration for getting me interested in electrical engineering at an early age, and I solidified that interest when competing at the Intel International Science and Engineering Fair (ISEF) during my senior year of high school. It was the interaction with aspiring scientists, doctors, and engineers all over the world that share the same passion in solving the world’s problems that really motivated me in pursuing engineering.

What has been your biggest challenge to overcome?

I would say in 10th grade when my mother was diagnosed with cancer and my brother was deployed overseas at the same time. I had to really dig deep to continue to do well in school while witnessing the effects of chemotherapy on a loved one. This gave me an intense motivation to always put my 110 percent to hopefully make the world a better place.

What do you consider to be your biggest accomplishment so far?

I have to say leading my Society of American Military Engineers Chapter at Virginia Tech as president to earn Distinguished Chapter this year. It required tapping into everyone’s strengths and knowing their weaknesses, and a lot of flexibility on my part. Seeing what everyone is able to accomplish as a team to finish interdisciplinary engineering tasks had to be the coolest thing to witness.

As a college student, what is the most important lesson you have learned?

My advice would be taking care of your people while in a leadership position will take you far. This also applies to classes—as the saying goes, “cooperate and graduate.” You might learn new ideas and opportunities available as well from all the interaction.

What advice would you give a high school student?

There is no such thing as impossible, even if the professionals do not support it. Reach out to mentors in the fields that interest you, and immerse yourself into whatever you want to accomplish. Broaden yourself to figure out what you want to do, since it becomes harder to change disciplines once in college. I know across the nation not all students have the same access to the needed resources. The most important thing is your values that you live every day in high school that you can carry into the workforce.

What do you like to do in your spare time? What are your hobbies?

Taking photographs of the world around me has always been a great hobby, along with being able to express emotions through my violin. I also love to run, and intense long night video game sessions, usually resulting in the need for a lot of coffee the next morning. I also love to travel the world and learn about other cultures. Anthropology has been a fascination of mine and helps me understand others better.

What is next for you/what are you looking forward to?

After this summer, I am looking forward to finishing my last year in the Virginia Tech Corps of Cadets, and continuing my undergraduate research. I am very much excited to be near family again after being away from them for three months.