The results of an investigation of the role of kinetic and multi-ion effects on NIF implosions were reported in a Physics of Plasmas paper published online on Dec. 29. The research focused on shock-driven deuterium (D2) and deuterium-helium-three (D3He) gas-filled “exploding-pusher” inertial confinement fusion (ICF) implosions at NIF to assess the impact of ion kinetic effects. 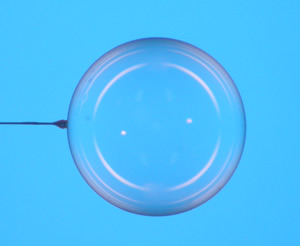 Implosions of thin, spherical glass shells known as exploding pushers are characterized by rapid heating of the thin shell, which explodes and drives a shock wave into the fuel. The shock wave compresses and heats the gas as it converges at the center of the capsule and produces fusion reactions as it rebounds back through the fuel.

Shock-driven exploding-pusher implosions are mainly one-dimensional in nature and less sensitive to the complex hydrodynamic processes, such as hydrodynamic instabilities and mix, that characterize implosions indirectly driven by ablators. Thus exploding pushers are an excellent platform to probe kinetic effects, which can be significant during the shock-convergence phase of ICF implosions—a critical stage in hot-spot ignition experiments.

The research combined data from NIF and the OMEGA Laser Facility at the University of Rochester and from both direct- and indirect-drive implosions. Measurements of ion temperature and fuel areal density (ρR) inferred from fusion-product spectroscopy were used to estimate the ion-ion mean free path in the gas. The study showed that the experimental neutron yield from D3He exploding pushers is, for the limit of extreme kinetic-like implosions studied, two orders of magnitude lower than predicted by average-ion radiation hydrodynamics codes.

The researchers said this drop in yield compared to simulation is largely due, not to traditional hydrodynamic mix to which such effects are often attributed—as in “conventional” ablatively-driven implosions—but instead to kinetic and multi-ion effects. In contrast, for the very hydrodynamic-like exploding pusher implosions, the researchers found that the average-ion radiation hydrodynamic codes accurately predicted yields and all other important implosion parameters.

The results are relevant for NIF ignition implosions because the implosion is very kinetic-like during the shock convergence phase before evolving into a very hydro-like phase. The research motivates continued development of kinetic models of ICF implosions, which may be especially pertinent at the high-temperature, moderate-density conditions present at shock burn in both exploding pushers and the shock-convergence phase of ablatively-driven implosions.

The work also has formed the basis for the development of a new D3He monoenergetic proton backlighter platform for NIF Discovery Science collisionless shock, stopping power, cosmic magnetic field, and hohlraum fields backlighting experiments. The first shot using this platform is scheduled for March 2015, and a NIF “shot day” devoted to developing the platform, led by LLNL’s Sebastien LePape and Ryan Rygg and their Massachusetts Institute of Technology (MIT) collaborators, is planned for June.