Kevin Fournier has been selected as the director of the National Ignition Facility’s User Office. In this role, Fournier is responsible for developing and implementing the strategy for support of the NIF user community, including generation of the integrated NIF facility use plan and experiment schedule, solicitation and evaluation of proposed experiments, management of experiment review, and approval, development, and maintenance of the user infrastructure. 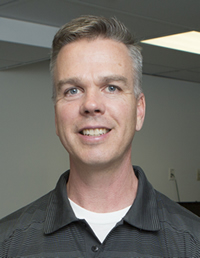 “Kevin will work with the NIF programs, users, and the facility to operate NIF effectively as a world-class user facility,” said NIF Director Mark Herrmann. “He will help develop, implement and maintain a vision and strategy for execution of NIF experiments, solicit and champion experiments that have long-range revolutionary impact, and work to engage the programs and the user community to understand and realize new capabilities needed for long-term program priorities.”

Fournier will work closely with the High Energy Density (HED)/Inertial Confinement Fusion (ICF) councils, the Joint National Security Applications Council, the Technical Review Committee for Discovery Science, the NIF User Group, and other user organizations and representatives throughout the country to positively impact the successful execution of their program experiments on NIF. Reporting to the NIF director, Fournier will be a key member of NIF’s management team, as well as a member of the NIF & Photon Science Directorate senior management team.

Fournier joined LLNL in 1994 as a graduate student in the theory and modeling group in the Physics Directorate. He worked for several years on atomic theory and spectral modeling for x-ray lasers, astrophysical and magnetically confined plasmas, and HED plasmas. From 1999 to 2004, he worked on developing theoretical models for analyzing weapons effects and nuclear forensics.

Since 2005, he has experimentally studied HED plasmas for basic science and weapons effects at laser facilities around the world. In 2011, he joined NIF&PS as the nuclear weapons effects integrated experiments team leader and the national security applications program manager. In this role he has served as the main point of contact for National Nuclear Security Administration, Department of Defense, and Homeland Security national security experiments at NIF and the OMEGA laser at the University of Rochester.

“I would also like to take this opportunity to thank Peg Folta for serving as the acting director of the User Office since July,” Herrmann said. “Peg has done a great job in leading the User Office during the transition period, overseeing many improvements to the user interface tools and significantly enhancing NIF’s communication with the users at an important time.”

Working hand-in-hand with LLNL researchers on NIF experiments and diagnostics is proving to be a highly successful academic strategy for recent and current physics PhD students at the Massachusetts Institute of Technology (MIT)’s Plasma Science and Fusion Center.

Three of the students in the NIF-MIT Thesis Program have successfully defended their theses based on NIF data, while also serving as lead authors on important NIF-related papers in scientific journals. The fourth is scheduled to defend his thesis this coming April.

“We are delighted that MIT has had the opportunity to be part of the NIF Team” since the inception of experiments, said Rich Petrasso, who heads the High Energy Density Physics Division at the Plasma Science and Fusion Center, “and we are deeply appreciative that our many colleagues and good friends at NIF have been so embracing and encouraging” to the students.

“Rich Petrasso deserves all the credit in the world for putting his students in a position to succeed and to be doing really interesting, high-visibility work here at NIF,” said recent PhD Mike Rosenberg. “His enthusiasm and persistence is unmatched. On the LLNL side, people like Andy Mackinnon and Nino Landen have been extremely welcoming and supportive of student involvement in mainline NIF activities.” 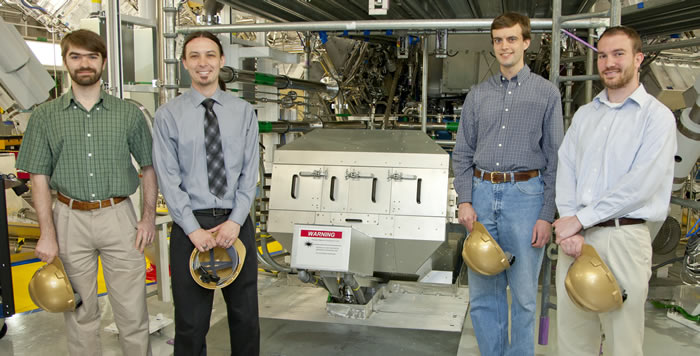 NIF-MIT PhD Thesis Program participants Hans Rinderknecht (left), Dan Casey, Alex Zylstra and Mike Rosenberg in the NIF Target Chamber with the NIF magnetic recoil spectrometer (MRS). The MRS is one of several diagnostics developed for NIF by MIT’s Plasma Science & Fusion Center and the Laboratory for Laser Energetics at the University of Rochester. The MRS neutron spectrometer is used both for NIF ignition experiments and for plasma nuclear science experiments.

The most recent thesis defense, on Jan. 16, was by Hans Rinderknecht, who has been a leader in the development and analysis of the NIF particle time-of-flight (PTOF) detector, which measures nuclear bang-time using protons and neutrons. Petrasso said the defense committee pronounced both his defense and research “outstanding.”

The thesis described studies of non-hydrodynamic processes in inertial confinement fusion (ICF) implosions at NIF and the OMEGA Laser Facility at the University of Rochester. The PTOF technology is being extended into a new magnet-based PTOF diagnostic, which MIT physics graduate student Hong Sio, another NIF-MIT thesis candidate, will lead.

“As graduate students,” Rinderknecht said, “we have had opportunities for hands-on experimental lab work on the one hand, and both running and collaborating with national-scale laser experiments on the other. That’s a rare combination, and I think it has been extraordinarily valuable for our growth as scientists.”

At MIT, Rinderknecht won the physics category of “Dance your PhD 2014” with a performance of “In The Ring: A Fusion Odyssey” (view the video). He also was lead author on a Physical Review Letters paper last April titled, “First Observations of Nonhydrodynamic Mix at the Fuel-Shell Interface in Shock-Driven Inertial Confinement Implosions,” and another Physical Review Letters paper just published on Jan. 14 titled, “Ion Thermal Decoupling and Species Separation in Shock-Driven Implosions.”

The first NIF PhD, Dan Casey, received his degree in nuclear science and engineering in 2012 and is now a NIF experimental physicist; his thesis was titled, “Diagnosing Inertial Confinement Fusion Implosions at OMEGA and the NIF Using Novel Neutron Spectrometry.” Casey played a key role in the design and development of the NIF magnetic recoil spectrometer and was lead author on several recent papers, including a July 25, 2014, Physical Review E Rapid Communication titled, “Reduced instability growth with high-adiabat high-foot implosions at the National Ignition Facility.”

“The MIT collaboration brings fresh faces to LLNL and provides students with unique experiences while participating in research at a world-class facility like NIF,” said Casey. “In my case, it was an experience I enjoyed enough to want to do every day.”

Rosenberg, who successfully defended his thesis last September (see NIF&PS People, September 2014), is now supporting polar direct-drive experiments on NIF as a research associate at the Laboratory for Laser Energetics (LLE) at the University of Rochester. Rosenberg has been lead author on a number of papers, including a Physics of Plasmas paper based on his thesis published on Dec. 29 (see “Studying Ion Kinetic Effects in NIF Implosions”).

“I was really attracted to the field of ICF and to NIF because achieving fusion ignition is such a compelling challenge—both in terms of its goals and in terms of the process,” Rosenberg said. “It’s really energizing to be part of a large team working toward that mission. In fact, one of the reasons I went into this field was because I knew NIF would be coming online during the period of my PhD, though I didn’t have any idea how much I’d get to participate in actual NIF experiments.

“The experience has been extremely valuable in several different ways,” he said. “One, I got to do some interesting experiments, leading to—hopefully—good publications. Two, I’ve made so many contacts across the field, which has helped greatly with the science itself and in addition, rewardingly, just being a part of the community. And three, in part, the work I’ve done has led to my getting a job with LLE, working on-site here at NIF to carry out a different but related set of experiments.”

Alex Zylstra, who will defend his thesis in April, was lead author of a Physics of Plasmas paper published last November titled, “The effect of shock dynamics on compressibility of ignition-scale National Ignition Facility Implosions.” Zylstra and Rinderknecht are finalists for an E.O. Lawrence Postdoctoral Fellowship. Two other PhD students, Sio and Brandon Lahmann, are currently working at NIF.

“We look forward to generating many more outstanding MIT PhDs while working within the umbrella of NIF programmatic science,” Petrasso said.