Ignition: A Look Ahead

First in a series of articles exploring the progress and challenges of LLNL’s Inertial Confinement Fusion Program. 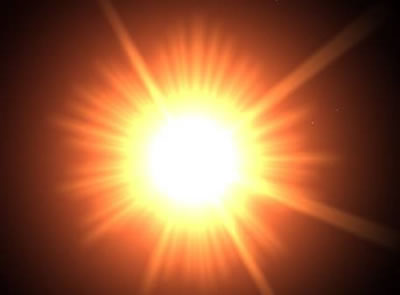 One of the most difficult and demanding scientific challenges they face is generating fusion ignition and gain in the laboratory. This is an important goal for the SSP, since it would fill a current gap in a needed experimental capability and it begins to open new and important applications of high energy density (HED) science for the SSP.

“Ignition is an especially hard problem,” said John Edwards, Program Director for Inertial Confinement Fusion (ICF), “because of the very high precision needed and the fact that for some physics important to ignition, we’re going beyond where our codes can currently predict with very much fidelity. We have to rely heavily on the experiments to guide us as we make our models better.”

While ignition is yet to be achieved, significant advancements have been made, including demonstrating the self-heating process for the first time in the laboratory. In this process, alpha particles released by fusion reactions in the “hot spot” at the center of the target capsule deposit their energy in the cooler fusion fuel outside the hot spot, leading to additional heating of the fuel. 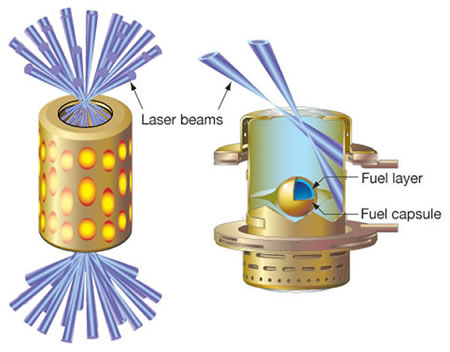 All of the energy of NIF’s 192 beams is directed inside a gold cylinder called a hohlraum, which is about the size of a dime. A tiny capsule inside the hohlraum contains atoms of deuterium (hydrogen with one neutron) and tritium (hydrogen with two neutrons) that fuel the ignition process. This is a critical step on the path to ignition. Subsequent experiments, however, have stopped short of ignition, due largely to two major factors: implosion asymmetry, and perturbations, or disturbances, caused by engineering features in the fusion targets.

During an experiment, or “shot,” NIF’s 192 laser beams inject up to about 1.8 megajoules of energy into a pencil eraser-sized cylindrical gold-lined container, called a hohlraum, which holds the peppercorn-sized fusion target capsule at its center. The energy from the laser beams rapidly turns the hohlraum into an x-ray oven. The x rays bathe the target, causing the capsule shell to vaporize and implode the fuel at nearly 400 kilometers per second, generating pressures of more than 200 billion atmospheres—greater than those found at the center of the Sun. To have a shot at achieving ignition, this implosion must have nearly perfect symmetry in order maximize the central pressure.

“Under these extreme conditions, any imperfections are amplified by the implosion and affect the integrity of the implosion,” said ICF Chief Scientist Omar Hurricane. “Our focus has been on identifying these limiting factors, and exploring ways to mitigate them.”

The ICF team has been exploring why the x rays that implode the target capsule have not been distributed evenly enough to symmetrically compress the target. While laser-plasma instabilities, or LPI, are a perennial concern, the expansion of plasma from the hohlraum wall and from the ablation of the capsule appear to be the strongest causes of interference with the laser beams.

New diagnostics such as the Kirkpatrick-Baez Optic are revealing the effect of perturbations caused by the fill tube and the tents on the implosion as evidenced by the roughly 10,000-electron-volt x-ray image on the right of the nascent deuterium-tritium hot spot captured at 190 picoseconds (trillionths of a second) before peak compression of the capsule. The laser beams are absorbed in the evolving plasma and consequently do not deposit energy where they are pointed in the target, leading to asymmetrical implosions.

Two engineering features in the targets also have been shown to seriously affect the implosion: the tent—ultra-thin membranes that suspend the capsule in the hohlraum—and the fill tube used to transfer fuel into the target. While these components are incredibly small—on the order of a few microns in diameter for the fill tube and tens of nanometers thick for the tents—they compromise the integrity of the capsule walls, resulting in weak spots, and even perforations, and localized implosion deformation.

Since 2015, the ICF team has made significant strides in understanding these issues through a combination of creative experimental techniques and integrated experimental tests. Progress was made in demonstrating symmetry control in three out of four separate experimental campaigns. In addition, progress was made on reducing LPI, increasing hohlraum efficiency, and investigating alternative target supports and fill-tube configurations (see, for example, “Riding ‘Unicorns’ Into the Future for NIF”). These efforts will be discussed in future articles in this series.

Looking to 2017, the researchers will be building on their prior progress by evaluating different capsule materials (plastic, diamond, and beryllium), continuing to examine how to optimize each capsule to the hohlraum configuration that works best with it, and looking for and understanding performance cliffs. 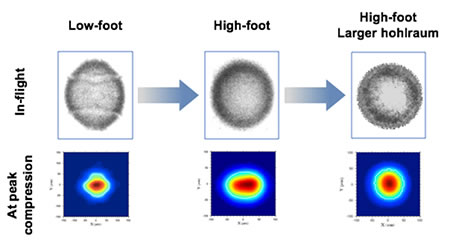 In the original “low-foot” design, the implosion was asymmetric as evidenced by the x-ray snapshot taken when the capsule was imploded to about 1/5 of its original radius (top) and the capsule support tents seeded perturbations in the shell in-flight which then fed into the hot spot later in time (x-ray emission image, bottom). The “high-foot” was less sensitive to the tent, but control of symmetry remained a challenge. More recent high-foot implosions in a larger hohlraum have shown good spherical symmetry throughout the implosion, from in-flight to peak compression. To provide better understanding of these factors, the focus also is on developing and installing improved diagnostics.

“We’re bringing up new diagnostics that will give us better insight into what’s going on in the implosion when it’s in the most extreme conditions,” said NIF Director Mark Herrmann. “We’re adding not only new types of measurements that can show dynamics on a faster time scale, more accurately and with higher resolution, but also more views of the capsule and of what’s going on in the hohlraum. We’ll be able to see things we have not been able to previously. We pretty much have a full court press on diagnostics.”

These efforts are part of the ICF team’s systematic approach to learning as much as possible about how targets behave, and what limits their performance, in order to clearly chart the path forward.

“The most important thing is that we are able to recognize problems that are frustrating our progress,” said Hurricane. “New diagnostics and experimental techniques allow us to see and understand those problems so we can propose realistic solutions, and we’re in the process of tackling them.”

“NIF is a remarkable machine and is taking us to places we’ve not been to before in the lab,” Edwards added. “What people see is exquisite data in new parts of parameter space coming out on a routine basis. But what’s not always visible to the outside world is how hard it is to keep NIF running and producing the quality of science it does.

“The teams that do this are utterly committed to the mission and never cease to amaze me,” Edwards said. “I’ve never had the privilege of working on anything like this before.”