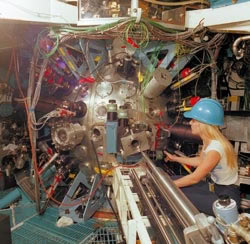 When the 20-beam Shiva laser was completed in 1978, it was the world’s most powerful laser. It delivered more than ten kilojoules of energy in less than a billionth of a second in its first full-power firing. About the size of a football field, Shiva was the latest in a series of laser systems built over two decades, each five to ten times more powerful than its predecessor.

Since the late 1940s, researchers have used magnetic fields to confine hot, turbulent mixtures of ions and free electrons called plasmas so they can be heated to temperatures of 100 to 300 million kelvins (180 million to 540 million degrees Fahrenheit). Under those conditions, positively charged deuterium nuclei (containing one neutron and one proton) and tritium nuclei (two neutrons and one proton) can overcome the repulsive electrostatic force that keeps them apart and “fuse” into a new, heavier helium nucleus with two neutrons and two protons. The helium nucleus has a slightly smaller mass than the sum of the masses of the two hydrogen nuclei, and the difference in mass is released as kinetic energy according to Albert Einstein’s famous formula E=mc². The energy is converted to heat as the helium nucleus, also called an alpha particle, and the extra neutrons interact with the material around them.

In the 1970s, scientists began experimenting with powerful laser beams to compress and heat the hydrogen isotopes to the point of fusion, a technique called inertial confinement fusion, or ICF. In the “direct drive” approach to ICF, powerful beams of laser light are focused on a small spherical pellet containing micrograms of deuterium and tritium. The rapid heating caused by the laser “driver” makes the outer layer of the target explode. In keeping with Isaac Newton’s Third Law (“For every action there is an equal and opposite reaction”), the remaining portion of the target is driven inwards in a rocket-like implosion, causing compression of the fuel inside the capsule and the formation of a shock wave, which further heats the fuel in the very center and results in a self-sustaining burn. The fusion burn propagates outward through the cooler, outer regions of the capsule much more rapidly than the capsule can expand. Instead of magnetic fields, the plasma is confined by the inertia of its own mass—hence the term inertial confinement fusion.

In the “indirect drive” method, the approach attempted first at NIF, the lasers heat the inner walls of a gold cavity called a hohlraum containing the pellet, creating a superhot plasma which radiates a uniform “bath” of soft X-rays. The X-rays rapidly heat the outer surface of the fuel pellet, causing a high-speed ablation, or “blowoff,” of the surface material and imploding the fuel capsule in the same way as if it had been hit with the lasers directly. Symmetrically compressing the capsule with radiation forms a central “hot spot” where fusion processes set in—the plasma ignites and the compressed fuel burns before it can disassemble.

NIF will be the first laser in which the energy released from the fusion fuel will outstrip the rate at which x-ray radiation losses and electron conduction cool the implosion—a condition known as ignition. Unlocking the stored energy of atomic nuclei will produce ten to 100 times the amount of energy required to initiate the self-sustaining fusion burn. Creating inertial confinement fusion and energy gain in the NIF target chamber will be a significant step toward making fusion energy viable in commercial power plants. LLNL scientists also are exploring other approaches to developing ICF as a commercially viable energy source (see Fast Ignition).

Because modern thermonuclear weapons use the fusion reaction to generate their immense energy, scientists will use NIF ignition experiments to examine the conditions associated with the inner workings of nuclear weapons (see Stockpile Stewardship). Ignition experiments also can be used to help scientists better understand the hot, dense interiors of large planets, stars and other astrophysical phenomena (see Discovery Science).

Climbing the Mountain of Fusion Ignition: An Interview with Omar Hurricane

“On the Path to Ignition,” Science & Technology Review, March 2013