NIF experiments support studies relevant to the entire lifecycle of a star, from its formation from cold gas in molecular clouds, through its subsequent slow evolution, and on to what might be a rapid, explosive death. To determine a star’s structure throughout the various stages of its life, astrophysicists need NIF’s ability to mimic the temperatures (10 to 30 million kelvins or 18 to 54 million degrees Fahrenheit) found in stars’ cores.

One astrophysics project at NIF is investigating the evolution of turbulence in supernova explosions. In a core-collapse supernova, a star with 10 times or more mass than our Sun uses up the nuclear fuel at its core element by element, starting with hydrogen and working up the periodic table. As each fuel is consumed, the star develops an onion-like structure, with layers differing in density and material.

Once the fusion process can no longer compete with the pull of gravity, the star’s core collapses in a few seconds, triggering a powerful explosion that sends a shock wave back through the star. Propelled by the shock wave, fingers of matter from heavier layers penetrate the overlying lighter shells, resulting in Rayleigh-Taylor hydrodynamic instabilities (the same instabilities that are detected in some NIF ignition experiments). The violent collapse produces an enormous number of neutrinos and many complex hydrodynamic effects. The resulting explosion appears as a bright flash of ultraviolet light followed by an extended period of luminosity that is initially brighter than the star’s entire galaxy. The explosion leaves behind a remnant that is either a neutron star or a black hole. 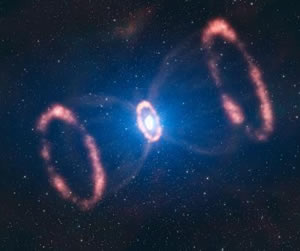 A university research team is using NIF to understand how an unstable interface is affected when heated by a shock in a supernova explosion. To simulate this process in scaled experiments, the researchers use NIF’s laser beams to create the extreme radiation, temperature, and pressure conditions of a supernova-type environment. They then observe the changes in a rippled target package via x-ray radiography. The targets are designed to enhance the radiographic contrast between the rippled iodine-doped polystyrene component, which mimics the dense supernova core, and the foam component, which mimics the interstellar medium. Measuring the ripple growth provides information on supernova evolution.

Another NIF astrophysics experiment aims to produce the first relativistic electron-positron pair plasmas in a laboratory, enabling experiments on a state of matter found only in gamma-ray bursts, black holes, active galaxies, and the universe shortly after the Big Bang. Scientists first theorized nearly 40 years ago that ultra-intense lasers could generate antimatter. NIF will be essential to understanding antimatter plasma as well as many fundamental plasma physics processes.