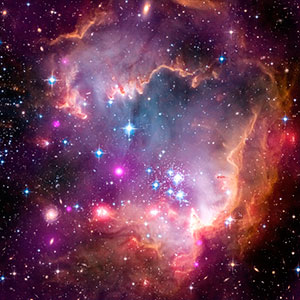 Since the beginning of civilization, humans have marveled at the night sky and pondered the vast stretches of the universe. The invention of telescopes in the 17th century revealed the first details of the Moon and the planets in our solar system. Four hundred years later, space-based observatories such as NASA’s Hubble and Kepler regularly capture amazing vistas of billions of galaxies millions of light years away.

Despite these advances, astronomers have only been able to infer the meaning of the images they capture. Now scientists have a laboratory on Earth to better interpret astronomical observations, refine the latest models of how stars and planets are born and die, and strengthen their understanding of the workings of the cosmos. Their new laboratory is the National Ignition Facility.

The “laboratory” is NIF’s 10-meter-diameter target chamber, where 192 laser beams converge on different targets to produce temperatures, pressures, and densities that are similar to those in the cores of stars, supernovae, and giant planets. These experiments are particularly relevant to astrophysics, the branch of astronomy focused on understanding the physics of the universe.

The mechanisms that drive stars and other astrophysical phenomena such as supernovae, black holes, and even planetary interiors are not well understood. By creating tiny parcels of plasmas (gases containing ions and electrons) under extreme conditions, scientists can better understand the physical processes that, until now, we’ve been able to observe only from afar.

In effect, NIF allows researchers to “visit” parts of the universe they can never access, either because the objects exist millions of light years away or their environments are far too hostile to physically explore. In this way, NIF experimenters are transforming astronomy from an observational to an experimental science.

Lab Astrophysics
NIF experiments support studies relevant to the entire lifecycle of a star, from its formation from cold gas in molecular clouds, through its subsequent slow evolution, and on to what might be a rapid, explosive death. To determine a star’s structure throughout the various stages of its life, astrophysicists need NIF’s ability to mimic the temperatures (10 to 30 million kelvins or 18 to 54 million degrees Fahrenheit) found in stars’ cores.

Nuclear Astrophysics
One of the great scientific challenges is understanding how elements form. This process, called nucleosynthesis, occurs at extreme stellar temperatures and pressures, making it difficult to simulate in the laboratory. The conditions produced by NIF experiments, however, are well matched to the conditions that exist in stars in several phases of their evolution. As a result, NIF is a powerful tool for exploring nuclear physics.

Planetary Physics
Hundreds of extrasolar planets have been identified, some smaller than Earth and others a dozen times more massive than Jupiter. Scientists are using NIF to “explore” these recently discovered exoplanets by duplicating the extreme conditions thought to exist in their interiors. There is intense scientific interest in understanding how these exoplanets might have formed billions of years ago, the composition of their interiors, and whether they could support an atmosphere or even some form of life.

Plasma Physics
Almost all of the observable matter in the universe is in the plasma state. Formed at high temperatures, plasmas consist of freely moving ions and free electrons. NIF is the only facility capable of creating plasmas with sufficiently high density, high flow velocity, and high temperature to approximate the astrophysical conditions observed in space.

“The NIF User Office: Where the World Meets the Laser”