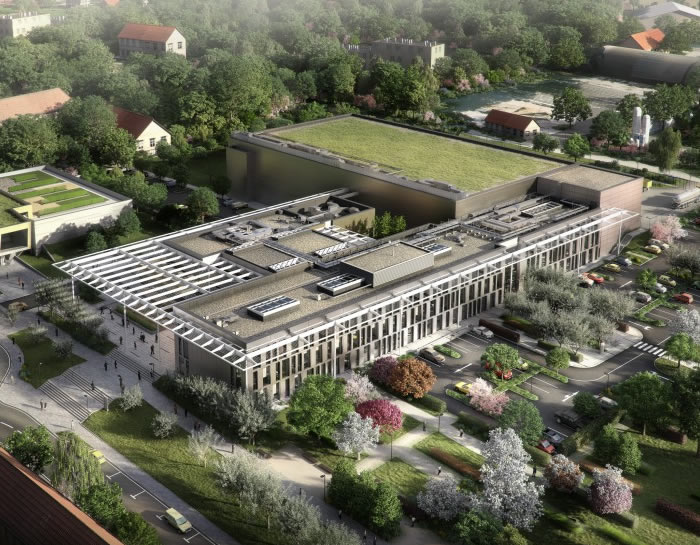 Architect’s Rendering of the exterior of the Eli-Beamlines facility now under construction in the Czech Republic.

The European scientific community has turned to the Laboratory for the design and construction of an extraordinarily powerful laser. Called the High-Repetition-Rate Advanced Petawatt Laser System (HAPLS), the instrument will be key to the ELI-Beamlines facility, the world’s new preeminent, high-intensity laser science facility in the Czech Republic.

HAPLS is designed to ultimately generate a peak power greater than one petawatt (1015 or one quadrillion watts), with each pulse delivering 30 joules of energy in less than 30 femtoseconds (trillionths of a second or 0.00000000000003 seconds)—the time it takes light to travel a fraction of the width of a human hair. The laser system will deliver these pulses of light at 10 Hertz (10 repetitions per second).

Delivering more than one petawatt at this extreme repetition rate is a major advancement over current petawatt systems, which cannot fire more often than once per second. “HAPLS’ high repetition rate will make possible new scientific discoveries,” says Livermore physicist Constantin Haefner, program director for Advanced Photon Technologies. While scientists have long performed experiments with powerful single-shot lasers, they have never had an opportunity to repeat experiments at 10 times per second.

HAPLS will deliver ultrashort, high-energy laser pulses for generating secondary sources of electromagnetic radiation (such as high-brightness x rays) and accelerating charged particles (electrons, protons, or ions). The laser technology will enable many applications in physics, medicine, biology, and materials science. The technology also will contribute to the development of laser-driven fusion power plants, which will require repetition rates of at least 10 Hertz. Because high-average-power lasers demand extremely high reliability and maintainability, HAPLS also will test a number of concepts for industrial applications.