At first glance it might be mistaken for a model of the Millennium Falcon of “Star Wars” fame. But it’s actually a new radiation-effects diagnostic that triples the number of material samples that can be exposed to x rays in a single NIF shot. 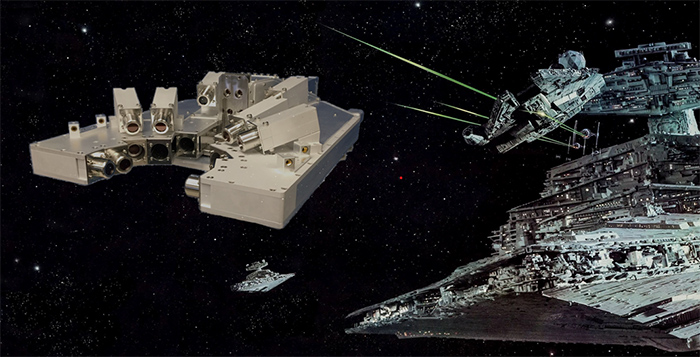 Designed by researchers from LLNL and Sandia National Laboratories, the STAR (Sample Test and Recovery) array was developed to measure shock velocity and heating in up to 16 material samples irradiated with x rays and allow recovery of the samples after the shot for further analysis. Ultra-low-density silver foams were used to produce extremely bright x rays, a capability unique to NIF.

“NSA experiments differ from traditional NIF experiments,” said NSA Program Manager Brent Blue. “The NIF laser energy is converted into different energies of x rays or neutrons. The experiment is the samples that are being held around the NIF target and exposed to the radiation. The more samples we can shoot, the more data we can get from every experiment, every shot,” he said. “And the more efficient we are, the better utilization of NIF we can make.”

Researchers use NIF to test material samples for vulnerability and hardness when exposed to hostile x-ray and neutron environments. NIF radiation sources help researchers evaluate how well U.S. weapons will be able to survive—and function as expected—after traversing evolving adversary missile defenses. Without the ability to survive, these weapons would be unable to hold targets at risk, rendering the deterrent ineffective. 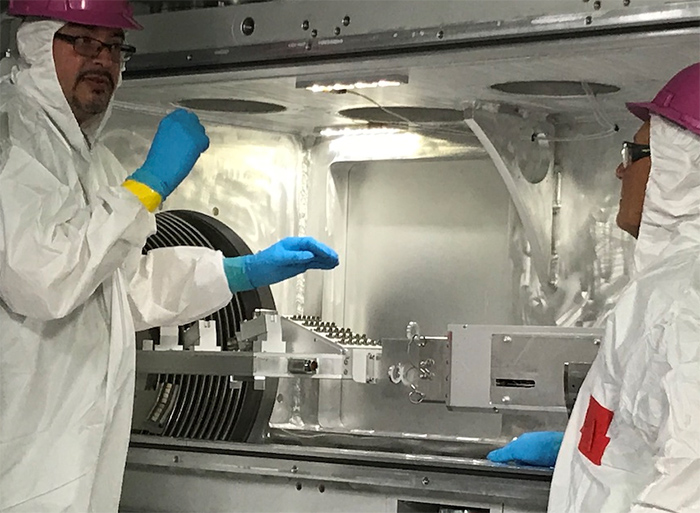 NIF Target Area operators Jimmy Ramirez (left) and Im Forth install and connect the STAR diagnostic for its first tests last July. Good data were acquired from all three tests.

STAR was born when LLNL researchers reached out to a research group at Sandia that was doing radiation-effects testing at other facilities. “We encouraged them to look at NIF’s capabilities,” Blue said. “Two years ago they did their first experiment, and they used the XTRRA, which holds six different samples at a time. Then they modified it and managed to squeeze in many more samples, but they were still limited on what they could do.”

To accommodate additional samples, Blue said, the Sandia group sketched up a larger assembly “and NIF target diagnostics took that initial design over and converted it into a NIF-fieldable design” that could survive NIF’s intense x-ray environment.

“We put a high priority on not only doing an experiment where we expose the material to the x rays or neutrons,” Blue added, “but also pulling that material intact out of the Target Chamber so we can do analysis back in the lab. We’re looking at how the material properties change during the experiment.” 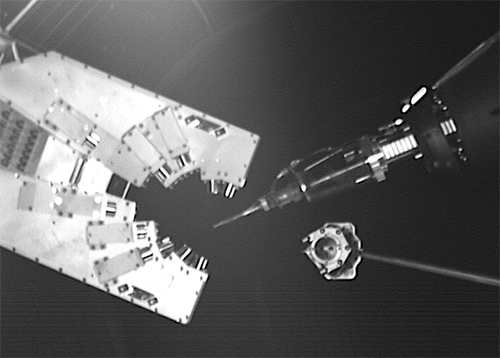 Looking more like a hungry shark than a spaceship, STAR is aligned around the x-ray source target in the NIF Target Chamber. On the right is the South Pole Bang Time neutron channel that measures the time of peak x-ray emission (peak compression) relative to the laser pulse.

Along with increasing the number of samples in a three-shot series from 18 to 48, the STAR array is configured with different standoff distances so the samples can be exposed to a variety of x-ray intensities.

“The x-ray source acts like a point source,” Blue noted. “As you go further away you get a decrease in fluence (energy per unit area). You can put two different samples at the same standoff and see how they respond to the same fluence. And then you could put the same sample at multiple distances and test how that sample responds versus a range of x-ray fluence. You get all that data on one shot—a very efficient use.”

Another unique aspect of STAR was tested in one of last summer’s shots: the use of an extremely low-density silver foam —“it’s literally not much more dense than air,” Blue said—as an x-ray source. First developed several years ago by UC Davis with funding from the Defense Threat Reduction Agency, the aerogel-style foams are very bright sources of 22-kilovolt x rays. They are now made at LLNL by a Target Fabrication Team led by Tyler Fears and Sergei Kucheyev (see “Making Metal with the Lightness of Air”).

“The STAR experiments that we did back in July were the first utilization of these silver foams for an actual effects test,” Blue said. “It takes the power of the NIF laser to excite the silver foam; nobody else could do it. We’ve been slowly ramping up from a few hundred kilojoules of energy since that first demonstration, and we’ve now gotten up to 1.2 megajoules of laser light—very insanely bright sources of x rays.

“We—we being the national security team here on NIF—have been working to improve the NIF infrastructure to be able to support the unique measurements that we alone are able to make.”