Making Metal with the Lightness of Air 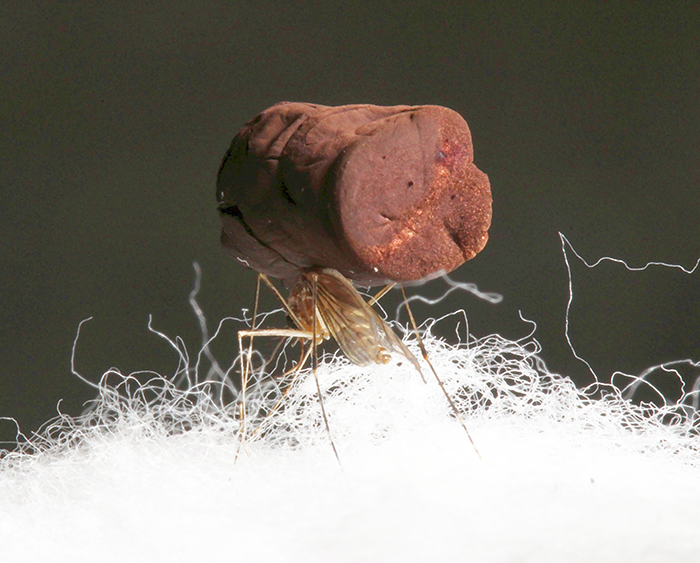 Gold, silver, and copper are heavy metals, but LLNL scientists can now make them nearly as light as air — in a form so tiny it can ride on a mosquito’s back.

The foam is the product of a nearly decade-long research effort by members of the Lab’s NIF and PLS directorates for use on inertial confinement fusion (ICF) experiments at NIF, the world’s most energetic laser system.

The material is called foam because that’s historically what these types of materials were named, but it’s not a material made by foaming. It’s a spaghetti-like web of randomly connected nanometer-sized wires, formed into the shape of a miniature marshmallow and containing the same or fewer number of atoms as air.

Physicist Sergei Kucheyev calls it a “porous metal monolith. There’s a lot going on here in terms of both chemistry and physics.”

Scientists sought different ultra-low density metals that can be used as targets for laser-driven x-ray sources for experiments further probing the properties of various materials placed under the extreme conditions possible when NIF’s 192 high-powered lasers are directed inside the Target Chamber, said Tyler Fears, a staff scientist with the LLNL’s Materials Science Division (MSD).

Each element emits a characteristic set of x rays when heated by lasers into a plasma, Fears explained. Metal foams can mimic gas even though they are made from materials that are not gas a room temperature.

The underlying physics of laser-driven x-ray sources, however, sets the bar high with rigorous specifications for the types, densities, shapes, and sizes of metal foams needed for experiments.

“We need heavy metal targets to be around the density of air and a few millimeters in size within well-defined dimensions,” he said. “Our challenge is to try to meet all those goals at the same time.”

The team also had to make sure the techniques they developed could be repeated to consistently produce the foams, even if the size, shape, and composition are changed to meet future experimental needs. 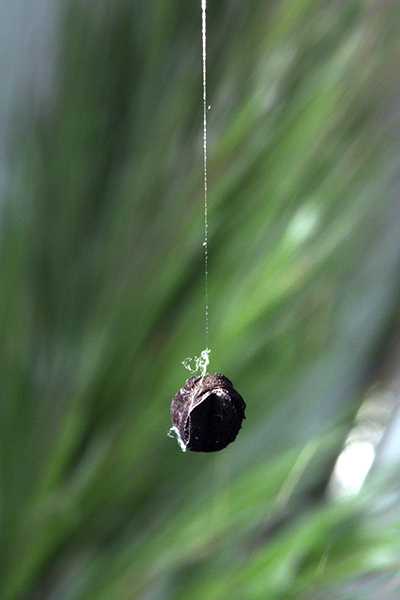 An ultra-low density metal foam sample dangles from a single strand of a spider’s web.

“You need to be able to make either the same material or a comparable material every time,” Fears said. “We have to understand when we change something, how is that going to change the product? If you change the density or if you change the shape, you have to know that’s the only thing you’re changing.”

Kucheyev said the research dates back nearly a decade, but “only in the last couple of years did we get foams of this amazing quality.”

Some previous versions aged in air before they could be brought into the Target Chamber, when they “ended up looking like old stale marshmallows,” he said. Another iteration came out of molds looking distorted, while others fell apart so easily one team member called them “cigarette ash.”

The team also tried using other types of low-density material to create scaffolding that provided a supporting structure for embedded particles of the specific metals. But the scaffolding materials would create unwanted x rays when hit by lasers, which would interfere with the x-ray data scientists wanted from the specific types of foam they were testing.

So, to maintain the purity of the x-ray spectrum, the team had to create the wire structure out of the specific metal itself, which was “the biggest challenge we had,” said materials scientist Fang Qian.

“The dearth of previous literature on creating these types of wires in large amounts meant we had to perform numerous experiments and fundamental studies to understand the synthetic mechanisms,” she said. “We have also leveraged several characterization tools in MSD to evaluate growth models, structure, surface, and chemistry of these unique materials. We eventually developed our own unique recipe and protocol.”

Qian added that MSD “can now rapidly perform the on-site research and development of metallic nanomaterials, such as particles and wires, and reproduce feedstocks at the gram-scale using rigorously tested procedures.”

The team freezes the nanowire inside a shape-creating mold typically filled with a water-glycerol mix. When it hardens, the nanowire looks like a “randomly interconnected mesh of frozen spaghetti,” Kucheyev said.

The material is then removed from the mold and the frozen water is extracted by replacing it with the solvent acetone, which is then dissolved in a supercritical drying process using liquid carbon dioxide, leaving only the metal and air. Supercritical drying ensures the liquid transforms into a gas phase without creating a meniscus that could damage the fragile ultra-low density metal foam structure.

“You don’t have any capillary pressures and that also allows you to maintain the very small pores without any shrinkage,” Fears said.

The team has produced copper and silver foam, and silver has performed well in NIF shots. The team is able to produce gold foams, which still tend to fall off the mounts that hold them in front of NIF’s lasers. “That’s the challenge we’re trying to overcome now,” Fears said.

The LDRD-funded project, a joint effort between PLS and NIF staff, is designed to build on the team’s previous work with silver and copper so materials scientists can make ultra-low density metallic foams with other metals “to respond to current and future needs,” Bagge-Hansen said. The team is now working on tin as well as gold.

“Translating these successes into other materials (e.g., gold) raised significant technical challenges that we are navigating in the LDRD,” he said. “I attribute our success to an innovative, diverse team of scientists that share their varied technical backgrounds to solve a highly multi-disciplinary challenge.”

The foams were developed specifically for NIF as x-ray sources. The material could also be applied to other uses, however, such as target shells or hohlraum liners. And now that scientists know the material can be made, it could spur creative ideas for future experiments.

“The physicists come up with ideas, but usually they’ll ask what someone can make, and they’ll design an experiment around that,” Fears said. “If we can make a material that they never thought we could make before, they’ll come up with new experiments to fit those capabilities.”