NIF and the Rise of LLNL’s Nanosatellites

To demonstrate a new paradigm in satellite construction and operation, LLNL researchers have been developing new instruments and operational principles for a type of nanosatellite called CubeSats. Based on technology with origins tracing to the optical expertise that went into the creation of NIF, the world’s largest laser system, the first efforts focused on missions that need visible-wavelength telescopes.

The latest CubeSat, dubbed MiniCarb, is a collaboration between LLNL and NASA’s Goddard Space Flight Center that will house an atmospheric monitoring instrument in place of the telescopes used by LLNL’s earlier CubeSats. 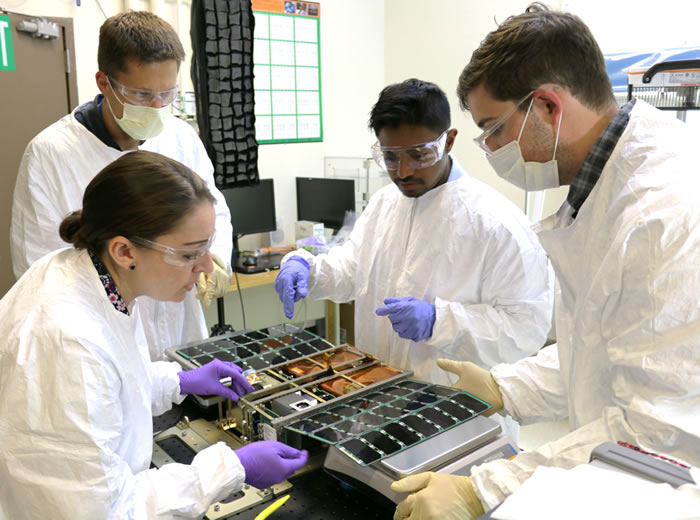 NIF brings the conditions found in the core of the Sun and the extremes of deep space to Earth in nanoseconds-long blasts of energy. This requires more than 7,500 meter-sized optics and 26,000 smaller ones. The ingenuity behind the design and fabrication of those optics has enabled NIF to operate reliably and repeatably for more than seven years.

That expertise also played a central role for the international team that designed the Large Synoptic Survey Telescope (LSST), which is now under construction atop a mountain in the Chilean Andes and will be operational in 2023 (see “The Widest, Deepest Images of a Dynamic Universe”). Partially funded by the DOE Office of Science, LSST will scour near space to detect potentially deadly Earth crossing objects and peer into deep space hoping to uncover the mysteries of dark matter and dark energy. 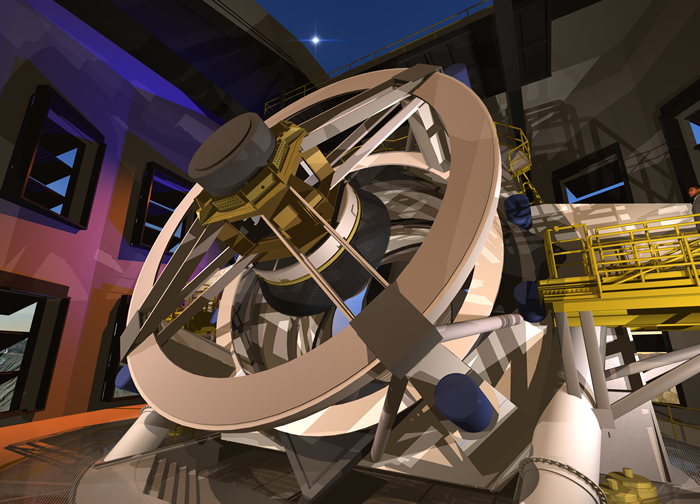 Though the Large Synoptic Survey Telescope (LSST) has a compact design, it is massive at 350 tons. Its moveable structures, including the camera, combine to weigh 300 tons. Credit: LSST

For LSST to rapidly scan the southern hemisphere, night after night, the telescope has to be as compact and lightweight as possible yet be enormous in size to collect the faintest light traveling from the distant reaches of the universe. An innovative approach by retired Livermore physicist Lynn Seppala allowed two of its three massive mirrors to be combined concentrically into a single monolithic surface, with the outer ring as the primary mirror and the inner ring as the tertiary mirror. 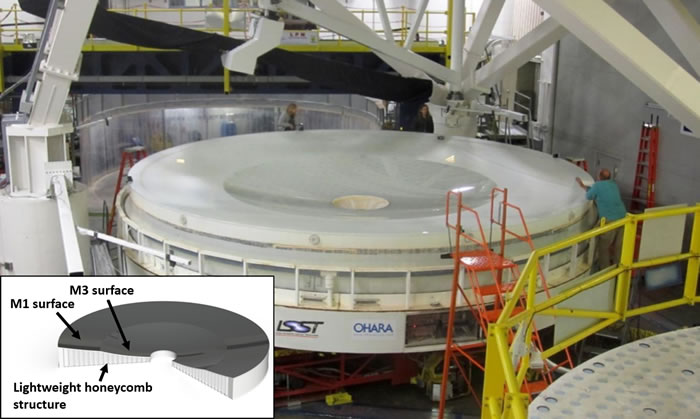 The use of a dual-mirror monolith in LSST inspired Livermore engineers Vincent Riot and Brian Bauman to seek novel design forms for nanosatellite telescopes. Bauman, an optical designer, proposed a concept by which a telescope could be constructed as a solid, unified structure of glass. Riot, who leads LSST’s camera development, recognized that the simplified design saved more than cost, complexity, and weight. It also led to the reduction of a set of mirror supports and accompanying alignment structures, further decreasing potential sources of failure.

Riot found that a monolithic design did have many features compatible with the new paradigm of nanosatellite design and development. Instead of large satellites costing hundreds of millions of dollars and taking many years to build, CubeSats could be built for a few million dollars or less in a year or two—or less. Because of their small size, CubeSats are small enough to tag along on rockets launching much larger satellites. This greatly reduces the cost of getting CubeSats into orbit.

Riot notes that not all missions can be reduced to CubeSat size. But for the ones that can, there are some other important advantages.

Using a fleet of smaller satellites to do the same job, besides being cheaper and quicker to produce, spreads the risk and provides what is often termed “resiliency.” That is, if one CubeSat from a constellation of dozens fails, either during launch or while in orbit, the degradation of overall mission performance is mitigated. In the event of a catastrophic failure, the cost and time to build a replacement is far less than starting over on a giant, one-off satellite. 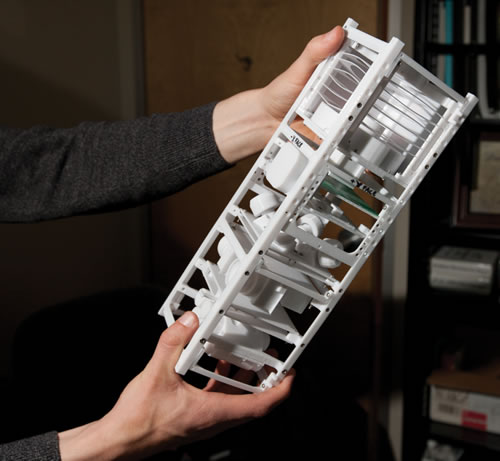 A mockup of STARE-A, a 3U CubeSat, shows that it is made up of three cubic units. The payload, a traditional telescope with its baffles, is in the topmost cube. Everything else is considered part of the bus. Credit: LLNL

A fleet of CubeSats also can provide improved spatial or temporal sampling compared to a single large satellite. For example, a constellation of CubeSats can make simultaneous measurements spaced around the surface of Earth, which is something physically impossible for one satellite to do alone.

Nanosatellites are a class of satellites that have a launch mass of 10 kilograms (22 pounds) or less. CubeSats get their name from their modular design based on building block units (U) of cubes with 10-centimeter sides. For example, a 3U CubeSat has dimensions of 10 cm×10 cm×30 cm. The MiniCarb, a 6U CubeSat, is twice the size of the Lab’s first 3U CubeSats.

Funded by the Laboratory Directed Research and Development (LDRD) program, the STARE (short for Space-Based Telescopes for Actionable Refinement of Ephemeris) CubeSats were developed in partnership with the National Reconnaissance Office (NRO), the Naval Postgraduate School (NPS), Boeing, and Texas A&M to help track space debris. Livermore built the payloads, each an 8.5-centimeters-wide telescope with a fixed focus set at infinity. The telescopes weighed less than a kilogram apiece. After they were installed into buses provided to LLNL, each CubeSat weighed about four kilograms.

STARE-A and -B used a conventional telescope design with independent primary and secondary mirrors for viewing distant objects, the (unlaunched) STARE-C configuration was the first to feature a new monolithic optic, an approach that combines the primary and secondary mirrors into a single element. This design was patented by Riot, Bauman, Darrell Carter, Wim De Vries, and Scot Olivier.

Used for GEOstare, the exposed monolithic design is on the left and the telescope attached to its baffle and detector is at right. Credit: LLNL

Although the STARE mission was never operationalized, the optics development attracted strong attention from several U.S. government sponsors. A third LLNL CubeSat, developed by a team led by De Vries, launched from India aboard a Polar Satellite Launch Vehicle rocket in January 2018. LLNL again built the telescope, using an updated monolithic telescope design, and an industrial partner provided the bus. This satellite produced excellent ground and space imagery, raising the technology readiness level of monolithic telescopes from 6 to 8.

For MiniCarb, also an LDRD project, Livermore has taken a new leading role. Its CubeSat team, in collaboration with the NRO and NPS, have developed a CubeSat Next Generation Bus designed to standardize requirements and allow for easier interchangeability between components. 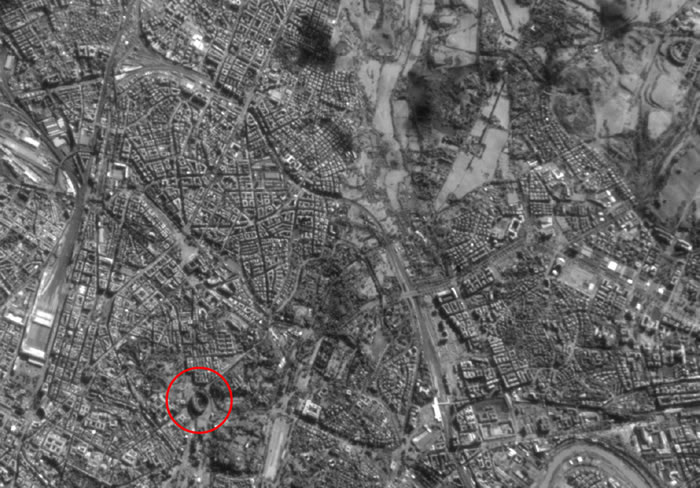 A GEOstare image of Rome, Italy, taken on February 11 of this year at an altitude of 566 kilometers by an LLNL monolithic CubeSat telescope. The Roman Coliseum is circled in red. Credit: LLNL

Instead of building a payload for MiniCarb, this time Livermore built the bus, which consists of solar panels, radio, GPS and antenna, attitude control, battery and power system, command and data handling system, and the railing framework that holds it all in place. NASA then designed and constructed the payload.

On May 8, a team from NASA Goddard and Livermore installed the payload into the CubeSat, a laser heterodyne radiometer that will measure carbon dioxide, methane, and water vapor in the atmosphere. In the coming weeks the team will complete the assembly and perform a series of structural and functionality tests. Then the MiniCarb CubeSat will be integrated into its launch vehicle in preparation for a trip to orbit.

For nearly a decade NIF has been working to further our understanding of the stars and planets through Discovery Science experiments, so it should come as no surprise that it has formed connections to space in other ways. With CubeSats and the MiniCarb project, NIF technology is helping pave the way to launch Lawrence Livermore Lab into space in a whole new way.

Part 2 in the series will detail the construction, operation, and mission of MiniCarb.