A research letter published in Nature Physics detailed how scientists from Lawrence Livermore and Los Alamos national laboratories increased the level of laser-induced energy absorbed by an aluminum, single-shell ICF fuel capsule to about 30 percent. With cylindrical hohlraums currently used at NIF the level of energy absorption, called coupling, is about 10-15 percent. 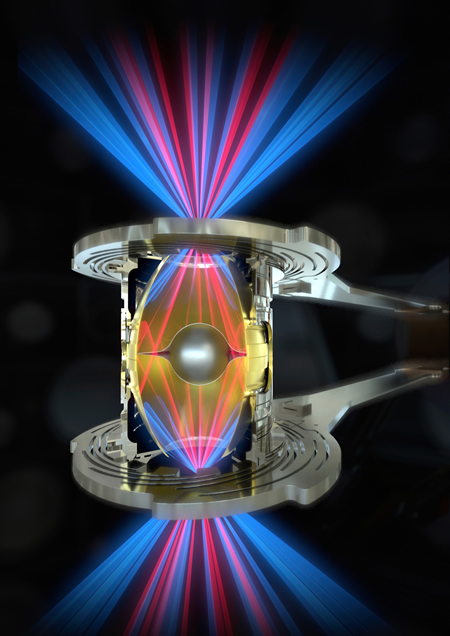 The significant increase sets a new path for further experiments with different hohlraum shapes that scientists are now pursuing to help them achieve one of NIF’s primary goals of reaching ignition—when more energy is produced than the amount of energy deposited by the lasers in the hohlraum.

“This high coupling efficiency can substantially increase the tolerance to residual imperfections and improve the prospects for ignition, both in mainline single-shell hotspot designs and potential double-shell targets,” the researchers said.

NIF physicists Yuan Ping and Vladimir Smalyuk, who carried out the setup and execution of the experiments, said the results came from 1-megajoule shots, which coupled about 300 kilojoules of energy with the target capsule. They’re optimistic that the breakthrough will mean future experiments using NIF’s full 2-megajoule capacity could be even more efficient at coupling energy to the capsule than in current shots, which would help all ICF research.

“It could be a big step forward for ignition,” Smalyuk said. “That’s why it has generated interest and could have big implications. Suddenly, there may be a path to make a step change in the amount of energy we can deliver to the capsule.”

Ping, the responsible experimentalist and the letter’s lead author, became interested in the project when she realized a “critical new path” toward ignition could come from focusing more attention on the inefficient flow of energy. While 80 to 90 percent of laser energy reached the inside of the hohlraum in previous experiments, 15 percent or less reached the capsule.

With NIF’s indirect-drive ICF shots, the facility’s 192 high-power laser beams converge inside the hohlraum, which holds a peppercorn-sized target capsule fueled with the hydrogen isotopes deuterium and tritium. The beams hitting the interior hohlraum sides generate a bath of x rays, causing ablation of the capsule shell and triggering the high-compression fusion of those hydrogen atoms to replicate the sun’s energy-producing process.

Previous research showed that smaller spherical capsules remain more symmetrical than larger capsules during implosions, which reduces perturbations and other imperfections that degrade the fusion process and inhibit ignition.

“If we have more energy available, then we can tolerate more of these defects and we will have more margin of error to achieve ignition,” Ping said. “That’s why this is very exciting.”

The scientists turned to a hohlraum roughly shaped like a rugby ball, which in the international sport is an elliptical ball that is wider at its center than an American football. With a rugby hohlraum, however, the top and bottom points are open holes that let laser beams enter (see “Rugby Hohlraums Join the Ignition Scrum”).

In a NIF experiment detailed in the Nature Physics letter, the team used a single-shell aluminum capsule inside a gold rugby hohlraum driven by 1 megajoule of laser energy with a reverse-ramp pulse shape. The hohlraum had room for a target capsule with a radius about 50 percent larger than usual, which provided more surface area to capture energy.

“The energy coupling is mainly enhanced by a combination of the large capsule-to-hohlraum ratio and the short drive duration,” the researchers said. “Efficient energy coupling would benefit both the mainline central-hot-spot (CHS) approach, where a hot spot initiates the thermonuclear burn, and a complementary scheme for volumetric ignition using double-shell (DS) capsules.” 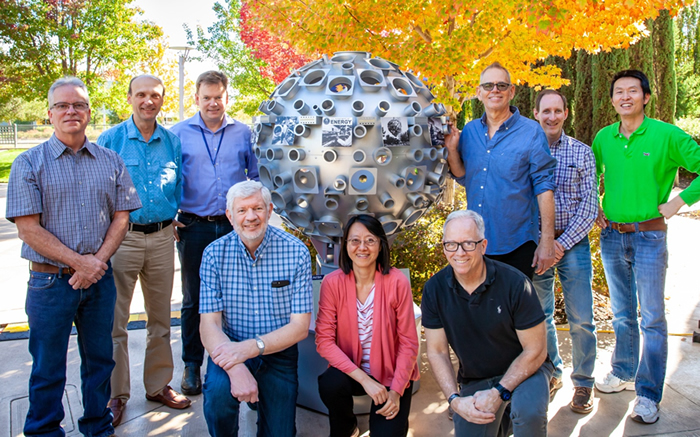 The curved inner walls of the rugby hohlraum better directed x-ray energy to the capsule than the squared corners of a cylindrical hohlraum.

The team plans to gradually step up the total amount of laser energy in shots while working to find the right mix of energy, laser pulse shape, capsule size, hohlraum shape, and implosion symmetry to optimize delivery of energy to the fusion fuel.

LLNL’s Peter Amendt, the main designer of the rugby hohlraum who performed pre- and post-shot simulations, said the research has inspired new hohlraum shapes. Amendt has been leading a Laboratory Directed Research & Development (LDRD) project to explore those shapes, including a truncated conical design he’s dubbed a “Frustraum,” a hybrid name combining the Latin word frustum, for “piece broken off,” with the German word raum, for “room” or “space.”

The results of the enhanced energy coupling experiments “could impact future ignition research at NIF,” he said. “We think there’s a path forward and we have the tools available to push this into interesting research territory.”