NIF inertial confinement fusion (ICF) experiments typically have used plastic (CH) capsules inside gold hohlraums filled with helium at densities ranging from 0.96 to 1.6 mg/cm3. Conventional laser pulses on the order of 15 to 20 nanoseconds in length are needed to reach ignition conditions with this capsule. 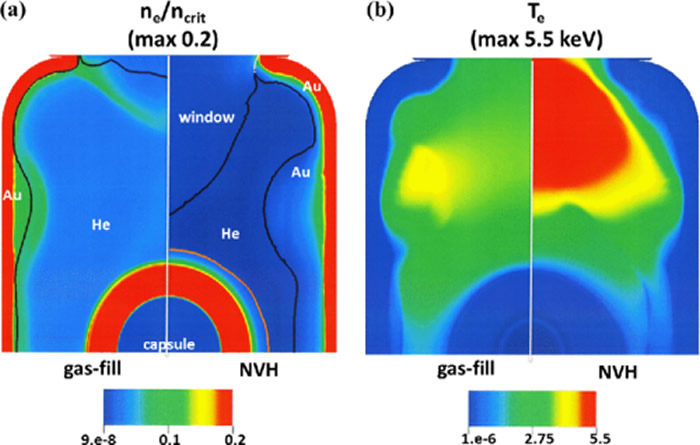 An NVH has a hohlraum fill density less than 0.1 mg/cm3 of helium, more than an order of magnitude lower density than conventional gas-filled hohlraums. This experiment replaced the CH capsule with a dense ablator made of high-density carbon (HDC), or diamond, which shortens the drive duration needed to achieve high convergence (the ratio between the initial radius of the implosion and the final radius). Symmetry of implosions driven with the NVH was controlled through direct adjustments to the inner and outer beam power balance, rather than relying on beam wavelength separations and the resultant cross-beam energy transfer.

The researchers reported early success at pushing the NVH to drive a two-shock, high-adiabat (internal capsule energy) cryogenic DT layered HDC implosion to convergence of about 27x, while keeping the implosion symmetry under control. An implosion driven by a 6.8-nanosecond, 1.2-megajoule laser pulse resulted in one of the best NIF performances so far relative to laser energy, with a measured primary neutron yield of 1.8×1015 neutrons, with 20 percent calculated alpha-particle self-heating (in which alpha particles generated by fusion reactions in the capsule’s hot spot heat the surrounding fuel). The implosion demonstrated high efficiency and a low level of laser-plasma interaction effects; the inner cone beams propagated better than expected to the waist of the hohlraum, suggesting longer laser pulses, with corresponding lower adiabats and higher compression, are possible.

Because of its high efficiency, low hot-electron preheat (which robs energy from the implosion), and better symmetry than expected, the researchers said, a broad range of experiments utilizing the NVH are currently being planned for physics studies on NIF.

“The NVH opens the potential to explore (a) range of ignition relevant designs with a highly efficient system that had not been previously considered” the researchers said.

Lead author Laura Berzak Hopkins was joined on the paper by LLNL colleagues and collaborators from the Laboratory for Laser Energetics at the University of Rochester, Los Alamos National Laboratory, the Plasma Science and Fusion Center at the Massachusetts Institute of Technology, General Atomics, and Diamond Materials GMBH of Freiburg, Germany.

Since NIF experiments began in 2010, the facility has pursued an indirect-drive approach to ignition using cylindrically shaped gold cans known as hohlraums.

In this configuration, all of NIF’s 192 laser beams enter the gold or depleted-uranium hohlraum through a pair of laser entrance holes and deposit their energy on the interior surface. The hohlraum heats up and efficiently creates soft x rays that bathe a suspended plastic (CH), high-density carbon (HDC), or beryllium (Be) capsule containing hydrogen fuel. The capsule compresses the fuel to conditions that approximate those at the center of the sun, with the goal of realizing energy gain from nuclear fusion.

One of the challenges of achieving energy break-even and net gain is ensuring that the hohlraum efficiently converts laser energy into the desired spectrum of x rays for driving a symmetrical capsule implosion and achieving high fuel compression. 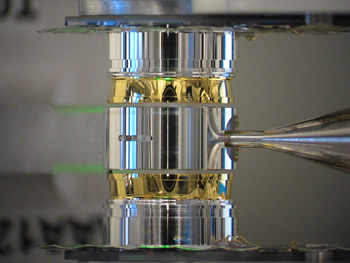 A rugby-shaped hohlraum is prepared for NIF experiments in the Target Fabrication Lab. Rugby-shaped hohlraums are being tested to determine if they can improve drive symmetry control on the target capsule.Because the laser pulses are relatively “long” at 10-20 nanoseconds (ns), the heated hohlraum walls have enough time to move toward the cylindrical axis and cause the laser beams to be absorbed well away from their initial location.

The motion of these “laser spots” is detrimental to achieving a round capsule implosion, so a helium gas fill often is used to hold back the gold walls just long enough while the NIF laser is on. If the laser pulse is short enough—about 10 ns or less—a “near-vacuum hohlraum” can be used to drive the capsule implosion. On the other hand, if the laser pulse is significantly longer than 10 ns, a high-density gas fill (at 1.6 mg/cc) is needed to hold back the walls.

Both of these hohlraum platforms have been used with success, but several challenges remain—including capsule symmetry, laser energy reflection, and missing x-ray drive energy (see “Climbing the Mountain of Fusion Ignition”). Because of these challenges, other hohlraum designs have been sought to achieve a balance of efficient and symmetric hohlraum drive. One candidate is a hohlraum shaped like a rugby ball, which resembles a cylinder with the corners of the can rounded off to minimize surface area. The major sink of energy in a hohlraum is through the wall surface area, and the rugby shape helps to appreciably reduce this energy loss.

As an alternative to the traditional cylindrical hohlraum, the rugby shape can be used to field a larger hohlraum that helps to delay arrival of the expanding gold wall and provides more radiation smoothing of the drive x rays at the capsule location. For these reasons a hohlraum with a rugby shape has gained interest as a potential additional platform for ignition studies at NIF.

In a Physics of Plasmas Letter published online on April 21, LLNL researchers describe an attempt to blend the design advantages of a rugby-shaped hohlraum with an intermediate gas-fill density for potentially optimized ignition performance. The design was chosen as a natural compromise between the two standard cylindrical hohlraum platforms (near-vacuum and high gas-fill) and leverages preliminary NIF experimental results in larger cylinders showing reduced laser backscatter losses and more benign implosion symmetry.

“Our letter proposes a novel ignition studies platform on the NIF using both rugby hohlraums and medium gas fills to combine the best of both worlds of the mainline cylindrical platforms with a novel shape,” said lead author Peter Amendt. “Progress to date has been outstanding.”

“The path to ignition is recognized as extremely challenging for any platform that is planned for testing on the NIF,” Amendt said. “However, the availability of an onsite world-class facility to test new ideas makes frontier research here at LLNL the norm, not the exception.”

Amendt was joined on the paper by LLNL colleagues Darwin Ho and Ogden Jones.

In NIF inertial confinement fusion (ICF) experiments, the fusion fuel implodes at a high speed in reaction to the rapid ablation, or blow-off, of the outer layers of the target capsule. To reach the conditions needed for ignition, the fuel must implode symmetrically at a peak velocity of about 350 kilometers per second—without producing hydrodynamic instabilities that can dampen the fusion reactions.

To address this challenge, NIF researchers have been testing target capsules that are 10 to 15 percent thinner than normal. The experiments are aimed at determining if the thinner capsules can produce higher-velocity implosions with better symmetry than the capsules used in previous experiments. 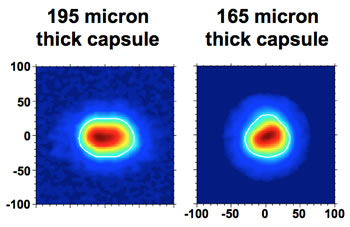 The thinner capsules are 175 and 165 microns (millionths of a meter) thick—10 percent and 15 percent thinner than the capsules previously used in the recent high-foot (high initial laser pulse) experiments that produced record neutron yields. The thin-capsule implosions have demonstrated good performance, with higher velocity and better symmetry control at lower laser powers and energies than their nominal-thickness counterparts.

“Little to no hydrodynamic mix of ablator material into the capsule hot spot was observed” in the first experiments in the thin-shell series, said NIF&PS physicist Tammy Ma. “This was despite the higher velocities and reduced depth that could lead to possible feed-through of instabilities that grow at the ablation front and penetrate into the fuel. Early results have shown good repeatability, with up to half of the neutron yield coming from alpha-particle self-heating.” (Self-heating is the process in which the alpha particles created by the fusion reactions in the implosion hot spot are absorbed by and further heat the compressed fuel, enhancing the yield.)

In a Physical Review Letters paper published online on April 6, Ma and her colleagues reported on the results of three thin-capsule shots representing three different ablator thicknesses using roughly the same laser peak power; higher neutron yield and inferred hot-spot pressure were achieved with each of the progressively thinner capsules. “This can be attributed to the gain in velocity due to the thinner ablator,” Ma said. “Further, images of the imploded hot spot show that thinner ablators provide better shape control.”

Ma was joined on the paper by LLNL colleagues and collaborators from the Laboratory for Laser Energetics at the University of Rochester, the Massachusetts Institute of Technology Plasma Science and Fusion Center, Los Alamos National Laboratory, and General Atomics.

Both talks were part of a colloquium organized by the European Extreme Light Infrastructure community, which is constructing a series of next-generation high-intensity

laser facilities in Europe, including the ELI-Beamlines facility in the Czech Republic. LLNL is building a key component of that facility, the High-Repetition-Rate Advanced Petawatt Laser System (HAPLS).

Barty also is playing a key role in this week’s Optics & Photonics International Congress 2015 in Yokohama, Japan, as one of three “Congress Chairs” for the meeting. He will give an invited plenary talk on “Nuclear Photonics for the 21st Century” at the beginning of the meeting, covering both fusion at NIF and nuclear excitation with photons (laser-Compton gamma-ray nuclear science). Also at the conference, LLNL physicist Hye-Sook Park will give an invited talk on laboratory astrophysical collisionless shock experiments on NIF and the OMEGA Laser System at the University of Rochester. Collisionless shocks are responsible for the properties of many astrophysical phenomena including supernova remnants, gamma-ray bursts, jets from active galactic nuclei, and cosmic ray acceleration.

The meeting will include celebrations of the UNESCO 2015 International Year of Light and the 2014 Nobel Prize in physics won by Dr. Isamu Akasaki and Dr. Hiroshi Amano of Japan for their work on efficient light-emitting diodes (LEDs).