Among the many discoveries on matter at high pressure that garnered him the Nobel Prize in 1946, scientist Percy Bridgman identified five different crystalline forms of water ice. Bridgman’s development of equipment that could produce extremely high pressures ushered in 100 years of research into how ice behaves under extreme conditions. 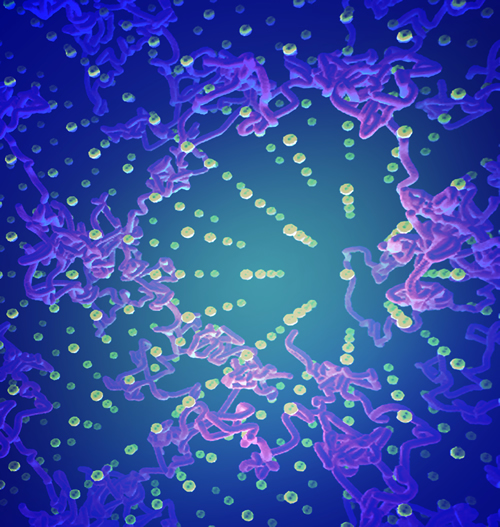 One of the most intriguing properties of water is that it may become “superionic” when heated to several thousand degrees at high pressure, similar to the conditions inside giant planets like Uranus and Neptune. This exotic state of water is characterized by liquid-like hydrogen ions moving within a solid lattice of oxygen—in effect, water behaving as both a liquid and a solid at the same time.

Since this was first predicted in 1988, many research groups in the field have confirmed and refined numerical simulations, while others used static compression techniques to explore the phase diagram of water at high pressure. While indirect signatures were observed, no research group has been able to identify experimental evidence for superionic water ice—until now.

In a paper published on Feb. 5 by Nature Physics, a research team from LLNL, the University of California, Berkeley, and the Laboratory for Laser Energetics (LLE) at the University of Rochester provides experimental evidence for superionic conduction in water ice at planetary interior conditions, verifying the 30-year-old prediction.

“Our experiments have verified the two main predictions for superionic ice: very high protonic/ionic conductivity within the solid and high melting point,” said LLNL physicist Marius Millot, lead author of the paper. “Our work provides experimental evidence for superionic ice and shows that these predictions were not due to artifacts in the simulations, but actually captured the extraordinary behavior of water at those conditions,” he said. “This provides an important validation of state-of-the-art quantum simulations using density-functional-theory-based molecular dynamics.”

“Driven by the increase in computing resources available, I feel we have reached a turning point,” added LLNL physicist Sebastien Hamel, a co-author of the paper. “We are now at a stage where a large enough number of these simulations can be run to map out large parts of the phase diagram of materials under extreme conditions in sufficient detail to effectively support experimental efforts.”

The work also has important implications for planetary science because Uranus and Neptune might contain vast amounts of superionic water ice. Planetary scientists believe these giant planets are made primarily of a carbon, hydrogen, oxygen and nitrogen (C-H-O-N) mixture that corresponds to 65 percent water by mass, mixed with ammonia and methane.

Many scientists envision these planets with fully fluid convecting interiors. Now, the experimental discovery of superionic ice should give more strength to a new picture for these objects—a relatively thin layer of fluid and a large mantle of superionic ice. In fact, such a structure was proposed a decade ago, based on dynamo simulations, to explain the unusual magnetic fields of these planets. This is particularly relevant as NASA is considering launching a probe to Uranus and/or Neptune in the wake of the successful Cassini and Juno missions to Saturn and Jupiter.

“Magnetic fields provide crucial information about the interiors and evolution of planets,” said Raymond Jeanloz, a co-author of the paper and professor in Earth & Planetary Physics and Astronomy at the University of California, Berkeley. “So it is gratifying that our experiments can test—and in fact, support—the thin-dynamo idea that had been proposed for explaining the truly strange magnetic fields of Uranus and Neptune. It’s also mind-boggling that frozen water ice is present at thousands of degrees inside these planets, but that’s what the experiments show.” 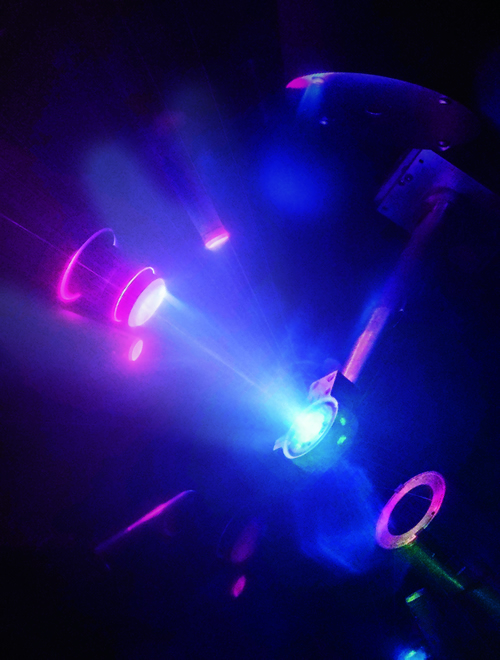 Using diamond anvil cells at LLNL, the researchers applied 2.5 GPa (25,000 atmospheres) of pressure to pre-compress water into the room-temperature form of ice called ice VII, a cubic crystalline form that is different from regular ice-cube hexagonal ice and is 60 percent denser than water at ambient pressure and temperature. They then transported the samples to Rochester and used LLE’s OMEGA-60 laser to perform laser-driven shock compression of the pre-compressed cells.

They focused up to six intense beams of the laser, delivering a one-nanosecond (billionth of a second) pulse of ultraviolet light to one of the diamond cells. This launched strong shock waves of several hundred GPa into the sample to simultaneously compress and heat the water ice.

“Because we pre-compressed the water, there is less shock-heating than if we shock-compressed ambient liquid water,” Millot said, “allowing us to access much colder states at high pressure than in previous shock-compression studies, so that we could reach the predicted stability domain of superionic ice.”

The team used interferometric ultrafast velocimetry and pyrometry (measurements of velocity and temperature) to characterize the optical properties of the shocked compressed water and determine its thermodynamic properties during the brief 10-20 nanosecond duration of the experiment, before pressure-release waves decompressed the sample and vaporized the diamonds and the water.

“These are very challenging experiments, so it was really exciting to see that we could learn so much from the data—especially since we spent about two years making the measurements and two more years developing the methods to analyze the data," Millot said.

Looking ahead, the team plans to push to higher pre-compression and extend the technique to other materials, such as helium, that would be more representative of planets like Saturn and Jupiter.