Thanks to their massive gravity, compact astrophysical objects like black holes and neutron stars are among the most voracious entities in the universe, gobbling up interstellar gas and even dragging matter away from nearby stars in what are known as accretion disks.

Scientists want to better understand this accretion process and the disk of ionized gas formed around these compact objects because it could provide clues to their nature and behavior—such as the spectacular “jets” that emerge from supermassive black holes at close to the speed of light—as well as the properties of astrophysical plasmas. 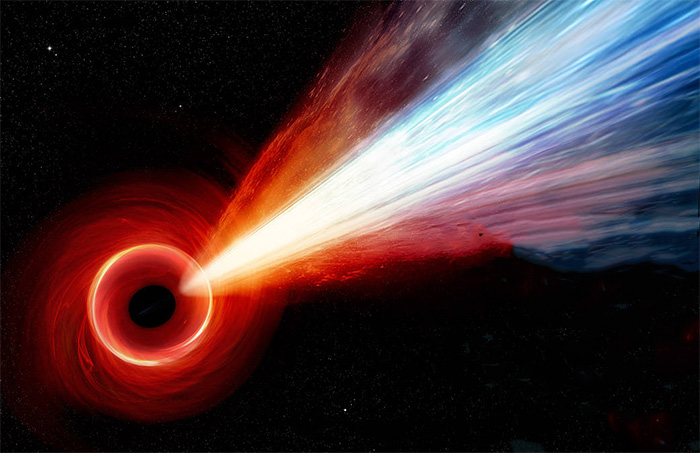 Illustration of an extraordinarily long jet of particles emerging from a quasar, a rapidly growing supermassive black hole named PJ352-15, in a young galaxy about 12.7 billion light-years from Earth. Discovered by NASA’s Chandra X-ray Observatory, the jet may help explain how the biggest black holes formed at a very early time in the universe’s history. One of the two most powerful quasars detected in radio waves in the first billion years after the Big Bang, it is about a billion times more massive than the Sun. Credit: NASA/CXC/M.Weiss

For example, quantitative analysis of the spectral features of iron observed in the x-ray reflection spectrum from the dense, innermost region of an accretion disk provides one of the best methods to infer the spin, or rotation, of the black hole that helps power the jets.

Directly observing accretion disks, however, is challenging because of their surrounding environment and the complexity of the system. That’s where well-characterized and -diagnosed laboratory experiments on facilities like NIF, the world’s largest and highest-energy laser, play a key role.

NIF experiments “provide a unique opportunity to create states of matter at extreme conditions of temperature, density, and radiation flux relevant to astrophysics, and thus to explore the universe in the laboratory,” said physics professor Roberto Mancini of the University of Nevada, Reno. Mancini is the principal investigator of a new NIF Discovery Science campaign designed to simulate the type of photoionized plasma found in accretion disks and the surrounding stellar wind.

“Laboratory experiments have become critical to guide our understanding as well as to test data interpretation and astrophysical models that have been developed only on a best-theory effort,” Mancini said.

Photoionized plasmas are created when matter is superheated on its way into a black hole or neutron star; high-intensity broadband x-ray and ultraviolet radiation knocks electrons out of their orbits, creating the mixture of ions and free electrons called plasma.

“The focus of this research,” Mancini said, “is to study the fundamental atomic and radiation physics of plasmas driven by an intense flux of x rays—i.e., iron photoionized plasmas—at conditions relevant to those encountered in accretion disks around black holes, x-ray binaries, and warm absorbers in active galactic nuclei.

“Iron is a key element for astrophysics,” he said. “The x-ray flux energy and duration needed to do the experiment are only available at NIF.” 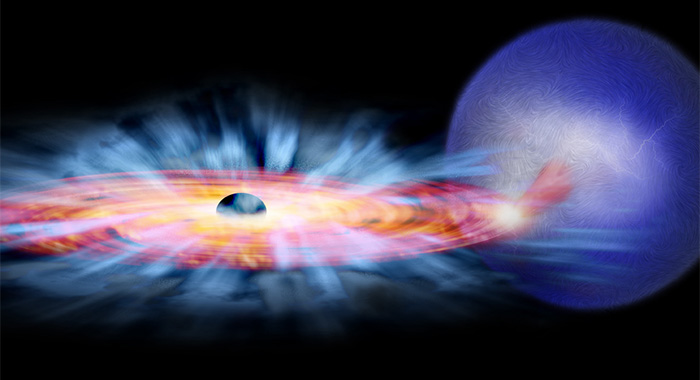 This illustration of the GRO J1655-40 binary star system, consisting of a black hole and a normal star, shows mass accretion flowing from the companion star and swirling around the black hole. Much of the hot gas is spiraling inward toward the black hole, but about 30 per cent is blowing away. The black hole, with a mass seven times that of the sun, is pulling matter from a star about twice as massive as the sun. Credit: NASA/CXC/M.Weiss

Collaborating on the research are Stanford University, Caltech, the University of Kentucky, Imperial College London, Technion, NASA, and LLNL.

Previous experiments at the Z pulsed-power facility at Sandia National Laboratories and other facilities have produced significant discrepancies with astrophysics codes. The NIF iron PIE experiments “will demonstrate iron PIE in the laboratory for the first time,” Mancini said, “thus making a critical contribution to understanding these discrepancies.” 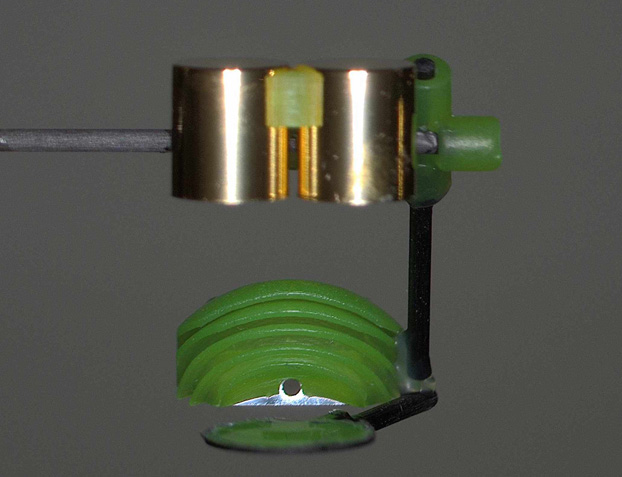 The NIF target consists of a three-halfraum array generating an x-ray source to ionize a low-density sample plasma. The photo shows two of the halfraums, the sample on a CH (polymer) ring at the bottom, and the backlighter behind the sample covered by a green “Sydney Opera House” shield. (Click to expand image.)

The campaign conducted its first three experiments on Aug. 3. To achieve an x-ray drive longer than the equilibration time—about 10 to 30 nanoseconds (billionths of a second) in the lab—NIF drove three gold halfraums (half hohlraums), one at a time for 10 nanoseconds each, producing a 30-nanosecond drive onto a thin plastic-tamped iron-magnesium sample. Simulations predicted that the sample would heat and expand from half a micron to more than 1,000 microns in thickness.

The sample was backlit to produce an absorption spectrum recorded with the NIF Opacity Spectrometer. Analysis of the transmission spectrum provides plasma ionization and temperature data. Separately, a gated imager measured the sample expansion to infer its density and the DANTE-1 diagnostic measured the drive flux from the halfraums.

The next experiments in the campaign are scheduled for May of next year.