An international team led by scientists from the University of Oxford Department of Physics, University of Rochester, and University of Chicago turned to the National Ignition Facility (NIF) to help unravel the inner workings of heat conduction in clusters of galaxies—the largest structures in the universe.

This video shows the 3D radiation magneto-hydrodynamic FLASH simulation of the NIF TDyno experimental platform. Rendering of the magnetic field is shown as a function of time, with grids and cylindrical shields shown in grey. The laser ablation generates two counter-streaming flows that go through the grids and collide in the center to form a hot turbulent region where turbulent dynamo can operate. Seed magnetic fields from the laser-target interaction reach the center and turbulent dynamo amplifies them to large values, a million times the strength of Earth’s magnetic field, which results in the marked reduction of thermal conduction. Credit: J.T. Laune, Cornell University (Click to expand video.)

These clusters are made of thousands of galaxies, bound together by gravity. Most matter in galaxy clusters is in the form of tenuous ionized gas, called plasma, swirling in a turbulent state and threaded together by magnetic fields. In observing many of these clusters, astronomers have been facing a difficult conundrum: They all appear much hotter than expected.

“How energy is injected into the plasma that fills galaxy clusters by the violently active galaxies at their centers, how it is then spread around and heats up the entire enormous system, producing the x-ray glow that observatories like Chandra pick up—these are fundamental questions about the largest building blocks of our universe,” said astrophysicist Alexander Schekochihin, an Oxford professor who was involved in the research published March 9 in Science Advances.

“Both observations and the logic of our theoretical models suggest that heat conduction in these plasmas is strongly suppressed compared to naïve expectations,” he said. “Several schemes for such suppression have been theorised about and simulated numerically, but very tentatively. Here, suddenly, we have it in a real laboratory plasma—and so the experiment now has a chance to leapfrog theory in helping sort out the basic properties of an astrophysical plasma, an exciting prospect.”

To address these questions, Jena Meinecke, junior research fellow at Oxford’s Christ Church, used NIF—the world’s largest and most energetic laser system—to create a replica of the plasma conditions expected to occur in these clusters.

“The experiments conducted at NIF are literally out of this world,” Meinecke said. “Capable of bringing the powerful dynamics of the universe to the laboratory, NIF truly provides opportunities to step into the unknown” (see “Turbulent Dynamo Experiment Yields ‘Amazing’ Data”). 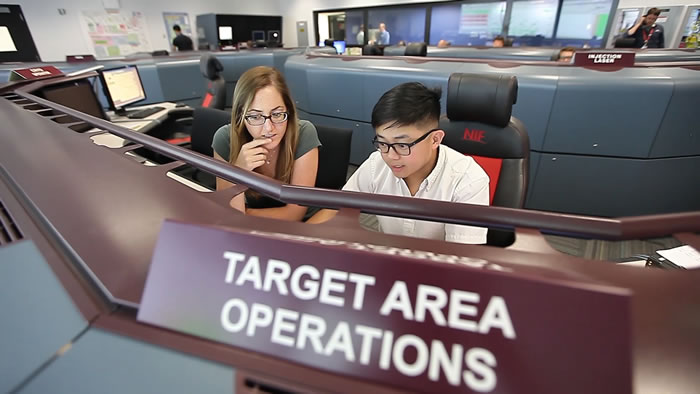 In the experiments, laser beams were used to vaporize plastic foils and generate a turbulent and magnetized plasma, in similar fashion to the laser-driven experiments the team performed at the Laboratory for Laser Energetics at the University of Rochester to demonstrate the turbulent dynamo mechanism for the first time.

“What is unique in these NIF experiments is that electrons in the plasma collide sufficiently infrequently with each other that they end up following the tangled magnetic field lines,” said Archie Bott, a Princeton University researcher. “This phenomenon, which is precisely what is believed to occur in clusters of galaxies, gives rise to suppressed heat conduction.” 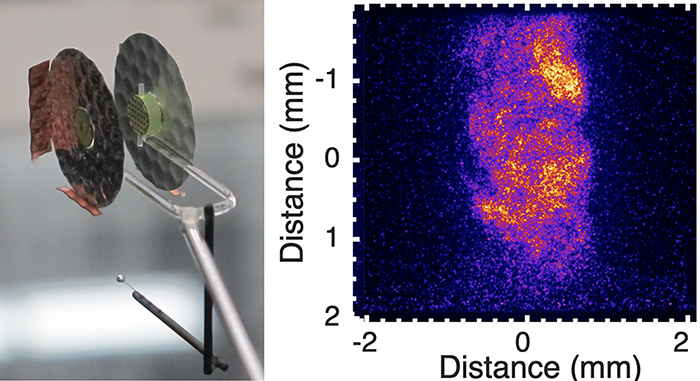 Left: The Turbulent Dynamo (TDyno) target deployed at NIF through the Discovery Science Program. The experimental target consists of two foils and a pair of grids, held together by cylindrical shields. Each target is about the size of a penny. Right:  X-ray image of the turbulent plasma generated in the experiments, taken at 28 billionths of a second after the lasers fire. The hot plasma emits soft x rays, which enables the researchers to characterize the properties of the turbulent flow and measure the fluctuations of electron temperature that revealed the strong suppression of heat transport. Credit: NIF Operations Team

This effect is clearly seen in the laboratory data, the researchers said: The measurements show pockets of hot plasma that persist in time and heat cannot escape. Oxford Physics Professor Gianluca Gregori, the principal investigator for these experiments, said the work “is an important steppingstone in understanding microscopic processes that occurs in plasmas that are both magnetized and turbulent. The experimental findings are somehow surprising as they demonstrate that energy is transported in ways that is very different from what we would have expected from simple theories.”

“This is indeed an astonishing result,” added Professor Petros Tzeferacos, director of the Flash Center of Computational Science, which recently moved from the University of Chicago to the University of Rochester and led the simulation efforts to design and help interpret the NIF experimental campaign.

“To model the NIF experiments, we brought to bear the full array of physics capabilities of FLASH, the multi-physics simulation code we developed. The FLASH simulations were key for untangling the physics at play in the turbulent, magnetized plasma, but the level of thermal transport suppression was beyond what we expected.”

FLASH simulations of the TDyno platform with Spitzer thermal conductivity turned on (left) and off (right), showing the electron temperature in electron volts, eV (1 eV corresponds to 20,431℉). The strong magnetization of the plasma achieved in the NIF TDyno experiments results in significant suppression of the thermal conduction, which in turn results in significant fluctuations in the electron temperature (right), reproduced in the FLASH simulation. Credit: Yingchao Lu, University of Rochester.

While the simulations reproduce the experimental results by controlling the electron heat transport, they cannot determine the microscopic mechanism that is ultimately responsible for its observed suppression. Further work on the NIF laser is being prepared to look at the details of these interactions.

These experiments demonstrate how laboratory explorations can help the understanding of astrophysical systems in a way that is complementary to observations.

“The Discovery Science Program at the National Ignition Facility made it possible for us to study fundamental physical processes that are essential to understanding the hot, tenuous, magnetized plasma in the cores of galaxy clusters,” said University of Chicago Professor Don Lamb.