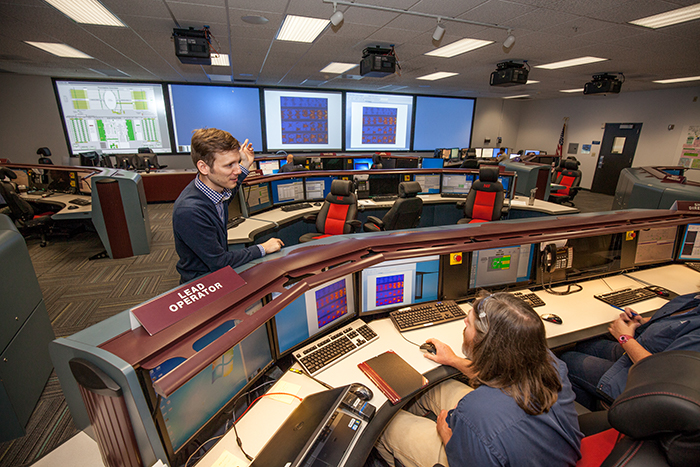 When NIF’s CMT (Campaign Management Tool) was finally retired May 3, it marked the culmination of a seven-year design and development cycle to replace the original experiment setup tool known to be complex and cumbersome.

“We consider this a big success story and it’s been a long time coming to get to this point, a lot of work,” said NIF Shot Data Systems Section Lead Doug Speck.

The CMT was created more than 15 years ago to help commission NIF’s 192 laser beams during facility construction. At the time, it was considered a good tool for laser scientists to optimize operation of the NIF laser.

But soon after science campaigns began in 2009, it became clear that CMT posed a whole set of issues for target physicists. It directly or indirectly managed about 20,000 setup parameters needed by NIF’s Integrated Computer Control System (ICCS) to execute an experiment. In addition, ongoing technological advances and the need to dramatically increase NIF’s shot rate rendered CMT outmoded.

For example, Java was needed to run the program, but Java updates would often break CMT and make it unusable, as often as every couple of weeks—on deadline.

Shot setup selections were often done with a drop-down menu, like diagnostics snouts or filters, and these lists could contain hundreds of entries. However, there was no search capability in the lists, entries were not listed alphabetically, and only eight entries could be seen at a time.

“I had gone from thinking ‘We’ve got to keep it because it’s too much to change’ to ‘We’ve got to fix this thing because it’s too hard to use and maintain,’ ” Speck said. He led the NIF Shot Configuration Team from 2010 until turning over the reins in 2019 to Rich Beeler III, whose father was involved with CMT at the start.

The NIF 120-Day Study in 2014 concluded that CMT was “a bottleneck for production operations.” That kicked off the effort about seven years ago by the NIF Data Systems Section to develop and enhance an integrated suite of online tools—the Target Request Tool (TRT), the Shot Request Tool (SRT), Shot Planner, and the Shot Setup Tool (SST)—that would not only replace CMT but provide many new features and automations across the months-long experiment lifecycle preceding an actual shot on NIF (see “Streamlining the Lifecycle of NIF Experiments”).

Replacing CMT posed its own set of issues because NIF experimental shot operations had to continue unabated. One possible approach was to develop SST as a complete one-time replacement for CMT.

However, Speck said, “There are so many potential problems with a large, complex code going into production. You can’t just roll out one and expect it to work. We decided to do this incrementally.”

The decision was made to run both CMT and SST in parallel and migrate features from CMT to SST over many deployments.

“It’s really remarkable what the team has done without interrupting shot operations,” Speck said. “They were able to successfully migrate all the existing capability and meet all ongoing new development requirements in SST, all while developing and refining a much more efficient architecture.”

Speck brought in Beeler as a software consultant to flesh out the new SST architecture. Beeler became the Shot Configuration team lead two years ago.

“We were very nervous about how we were going to run CMT and integrate it to operate with SST in parallel,” Beeler said.

“The new program has better tools, much better integration, is much easier to use and the maintenance cost is much lower,” said Speck. For example, a new target diagnostic in CMT used to take five people about six weeks to implement. In SST, one or two people can perform the same work in two weeks.

The conversion process from CMT to SST took longer than expected in part because the Shot Configuration Team decided to integrate several of CMT’s satellite applications as native SST capabilities. Furthermore, under CMT, all the details of an experiment were saved in one monolithic XML file—information about the laser, each target diagnostic, target systems, and beam pointing.

“Early on, we decided not to go that way with SST,” Beeler said. “We break it apart now by system.” This minimizes dependencies between systems and reduces shared internal resources.

Beeler cited key functionalities with CMT and emphasized that it wasn’t a total makeover with SST. “We just made it perform better,” he said.

Matthias Hohenberger, who as a responsible individual (RI) is an experimentalist scientist who sets up shot experiments, noted that SST also created plenty of “quality of life” improvements. For example, when multiple experiments are open, SST automatically compares data entries and highlights ones that are different between experiments. CMT can only load experiments from within one campaign.

He also praised the SST team for working closely with the user base to generate ideas for many of the SST improvements through meetings and feedback requests.