Improving our understanding of the physical characteristics of plutonium as it ages is a vital aspect of maintaining the reliability of the U.S. nuclear deterrent in the absence of underground testing. The recent installation of a new plutonium target fabrication facility at LLNL aims to further progress toward that goal. 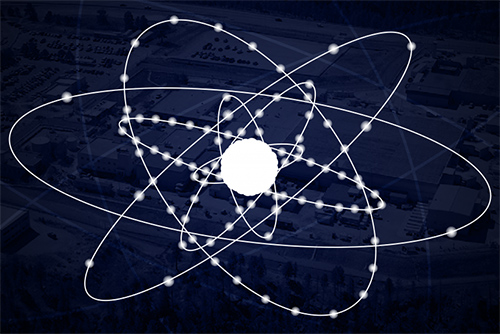 Researchers have developed a three-pronged program of experiments on NIF to help determine plutonium’s equation of state—the relationship between pressure, temperature, and density—along with its strength and phase transitions. The results are integrated with data from related experiments at Los Alamos and Sandia national laboratories as part of the National Nuclear Security Administration’s science-based Stockpile Stewardship Program (SSP).

“Our assessment of the physics of plutonium feeds into the weapons program and supports the safety, security, and reliability of the nuclear deterrent,” said design physicist Heather Whitley, associate program director for high energy density science in the Weapons Physics and Design Program of LLNL’s Weapons and Complex Integration (WCI) directorate.

“We can’t do any of these experiments without the contributions of every single person on these teams.”

Plutonium “pits”—spherical shells of plutonium about the size of a bowling ball—are a key part of the nation’s nuclear warheads. “Understanding the baseline properties of plutonium has always been important,” Whitley said, ”but as time has gone on (since underground explosive nuclear testing was halted in 1992) plutonium aging has become more important, and that has expanded the need for fundamental data to constrain the material properties of plutonium.”

But taking the measure of enigmatic plutonium, the element with the highest atomic number to occur in nature, is no easy task. The radioactive metal has 20 isotopes and six crystallographic phases with very similar energy levels, plus a seventh under pressure. Its dimensions change with temperature, pressure, and impurities, and it has many different oxidation states. In addition, the material’s properties do not always change in linear fashion.

Whitley said NIF, the world’s largest and highest-energy laser system, is especially valuable for exposing plutonium’s secrets because of its extremely reliable laser delivery, pulse-shaping ability, and high laser power. NIF can create pressures on targets that are up to 5 terapascals (TPa), or 50 million times Earth’s ambient air pressure.

These are “very interesting conditions that you couldn’t really access via other facilities,” she said. “Another strength of NIF,” she added, “is that we have exquisite diagnostics that enable us to make cutting-edge dynamic measurements of the properties of plutonium” (see “NIF and Stockpile Stewardship”).

To take full advantage of NIF’s unique capabilities, teams from across LLNL have contributed to a five-year project to develop a new target fabrication facility dedicated to the production of plutonium targets—particularly targets for equation-of-state (EOS) experiments. Installation of the new resource in the Laboratory’s “superblock” plutonium research and development facility was completed last summer, and the first EOS target was shot on NIF in early October.

“We have a pretty aggressive plan agreed upon by the tri-labs (LLNL, Los Alamos, and Sandia) to address plutonium aging,” Whitley said. “Completing that body of work relies on our ability to make rapid-throughput targets; we need to be making about a target a month or maybe even more, then executing the shots over the next several years in order to meet the goals of the larger program.

“The new target fabrication capabilities give us a state-of-the-art facility that supports the safety of the workers and the security of the enterprise.”

Targets for plutonium EOS experiments require extremely accurate fabrication; the stepped, or multilayered, EOS targets must meet precise specifications for dimensions, surface finish, and alignment. The small scale of the targets requires the part to be flat within a tolerance of better than 50 nanometers (billionths of a meter). If the stepped target were scaled to the size of a football field and had the same flatness specification, the top of every blade of grass would have to be cut within the thickness of a No. 2 pencil lead.

(Left) A plutonium target mounted on a NIF target positioner. (Right) Close-up of the stepped target seen through the VISAR (velocity interferometry system for any reflector) diagnostic cone.

“To make an equation-of-state target, you need precision diamond-turning capability,” explained Abbas Nikroo, the former NIF Target Fabrication Program manager who led the development of the new facility. “And the diamond-turning capability needs to be housed inside a glovebox because plutonium is very moisture-sensitive. These boxes allow you to keep the part in a very dry environment while allowing it to be manipulated through the gloves.”

The diamond-turning lathes are capable of nanometer precision and mirror-like surface finishes. The machines are temperature controlled and isolated from vibration.

The new facility also contains a second glovebox used to prepare the plutonium for diamond turning. “The material needs to be processed into planar pieces,” Nikroo said. “We have a laser cutting unit that allows you to cut the plutonium material into what we call ‘bricks.’ The bricks are the starting point for the final target.”

The second glovebox also contains a target coating capability that was developed in collaboration with LLNL’s Vapor Processing Laboratory.

Nikroo noted that fabricating and assembling tiny targets for NIF experiments is challenging enough in open air; working in a glovebox adds “an extra level of complexity.

“The equation-of-state targets involve precision steps—one brick machined to several sub-millimeter thicknesses—that are cut into the material,” he said. “You have to do the diamond-turning operation through the gloves, and then take these millimeter-sized parts of a few hundred microns thickness and do a precision assembly with these multiple layers.”

To prepare for the work on plutonium—only milligrams of the material are used in the targets—the team first tested the gloveboxes by fabricating gold and aluminum targets, showing that they could “keep the same precision that we have outside the glovebox,” Nikroo said. They also took care to integrate the new facility’s ventilation system into the rest of the superblock.

In plutonium EOS ramp-compression experiments, a test sample is gradually pressurized over a few fractions of a second. This isentropic compression technique keeps the temperature lower than in instantaneous shock compression and allows the material to maintain a solid crystalline state at higher pressures. 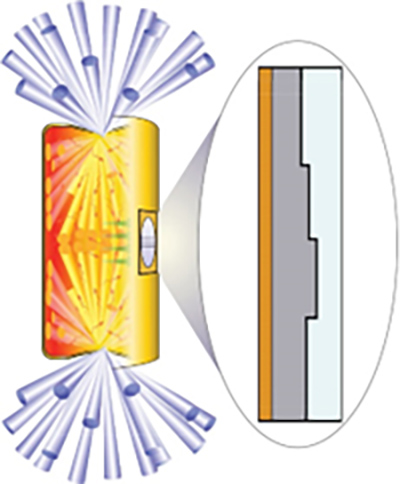 During ramp compression experiments, laser light enters the top and bottom of a hohlraum (German for “hollow room”). The light is converted to x rays, which heat and ablate the back side of a multilayered physics package placed over a tiny hole in the hohlraum’s wall. The physics package (inset) consists of an underlying copper ablator (left), a four-step target material (middle), and a layer of lithium fluoride.

Along with high-precision targets, ramp compression requires meticulous sample preparation and tuning of the compression rate to ensure that strong shock waves don’t form within the sample. The technique enables researchers to measure unparalleled high-pressure and low-temperature EOS conditions.

NIF EOS experiments use isotopically pure plutonium-242 (242Pu), the second longest-lived isotope with a half-life of 373,300 years (NIF does not test weapons-grade plutonium). The first 242Pu ramp-compression experiment was conducted on NIF in April 2019, marking the start of the current experimental campaign to better understand how the element compresses under extreme pressure.

The first plutonium EOS shot using a stepped target in October, which met a milestone for the superblock target fabrication facility, “was successful and returned meaningful and important data,” said LLNL materials scientist Jim McNaney, who leads the NIF Materials Integrated Experimental Team. An accurate EOS is essential for generating and validating the computational models that underpin simulations critical to stockpile stewardship efforts such as life extension programs (LEPs), which aim to add 30 years of service life to aging nuclear warheads.

Along with the EOS targets, the new facility fabricates targets designed to measure changes in plutonium’s phase, or crystal structure, as well as the material’s strength under pressure. McNaney noted that while these other campaigns generate vital data on their own, they also “help us to interpret EOS data.”

Target diffraction in-situ (TARDIS) experiments use x-ray diffraction to determine the crystal structure of solids. Ramp-compressed samples are probed by diffraction of x rays generated by a laser-driven source foil. The resulting diffraction lines provide insights into phase changes, or structural transitions, that can occur in materials under extreme pressure (see “NIF’s TARDIS Aims to Conquer Time and Space”).

Familiar examples of phase changes include the transition of water to ice at low temperature and to steam at high temperature, and the creation of diamonds from carbon-containing minerals undergoing billions of years of intense temperatures and pressures far beneath the Earth’s surface.

“Almost all material properties depend on phase,” McNaney said, “and modeling materials to construct equations of state depends on phase. So knowing the phase is actually a bedrock for being able to construct an equation-of-state experiment.”

Target diffraction in-situ (TARDIS) experiments are providing valuable information on the characteristics of materials used in nuclear weapons as they age or are subjected to the immense pressures and temperatures of a thermonuclear explosion. The left photo shows the TARDIS diagnostic package containing a material sample, an x-ray source target on a stalk, and image plates to capture the x-ray diffraction cones inside the hemispherical cartridge. On the right are diffraction data obtained during a November 2014 experiment in which a lead sample was ramp-compressed to about 3.5 Mbar (millions of Earth atmospheres). The experiments provide experimental data to compare to computer models of SSP-relevant material behavior.

Strength experiments are designed to determine the extent to which a material deforms when it is stretched or compressed. In the plutonium strength campaign, samples are imprinted with two-dimensional sine-wave patterns, or “ripples.” The imprinted ripples grow when they experience compressive pressure from a shocked reservoir of materials as it pushes against the target. The higher the material’s strength, the more slowly the ripples grow.

(Left) The target for a strength experiment features a 9-by-14-millimeter hohlraum. Positioned over a side hole in the hohlraum is a 2-millimeter-thick, multilayered physics package containing a reservoir of five different materials, gold and plastic x-ray shields, and a sample of the metal of interest. (Right) The metal sample is imprinted under a microscope with two-dimensional sine-wave patterns. The imprinted ripples grow when they experience the pressure wave generated in the experiment.

Previous strength experiments employed a pressing technique used by the U.S. Mint to precisely stamp or “coin” the microscopic ripples into metals. “We would machine the ripples into a dye,” Nikroo said, “and that dye would be used to press onto the metal to form the ripples.

“It was difficult to imprint the ripples fully into plutonium,” he said. “But we found that with the diamond turning instrument, we can directly machine the ripples into the plutonium and don’t have to go through the extra step of making a precision die.”

Whitley praised the Target Fabrication Team and its collaborators for completing their work on time despite the constraints caused by the COVID-19 pandemic.

“It took a long, long time to have these capabilities instituted in the superblock,” she said, “so we were really proud to see it come to fruition during the challenges of the pandemic. The fact that the team was able to maintain operations and the safety of the workers is a testament to the dedication of our staff and the Lab as a whole—to make sure that we execute on our mission while also keeping our workforce safe.

“NIF was one of the first (NNSA facilities) to come back into operation after the pandemic shutdown,” she said, “and I think that’s something that we should be really, really proud of.

“I do want to make sure that our folks feel appreciated and know what they’re contributing across the board,” she added. “We understand how hard people work to do this. Oftentimes, the physicists end up in the limelight, but we can’t do any of these experiments without the contributions of every single person on these teams.”