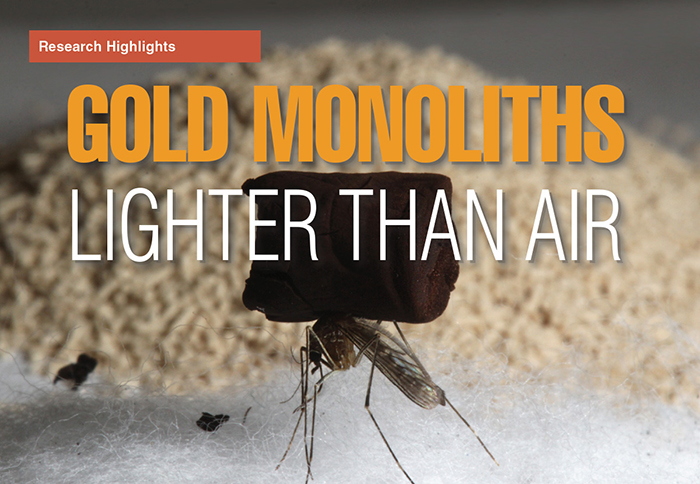 A mosquito standing on cotton fibers carries a sample of the Livermore team’s ultra-low-density gold aerogel, which is literally lighter than air. Credit: Joshua DeOtte

The following is an excerpt from a story by Allan Chen in the May 2021 issue of Science & Technology Review:

Gold, that dense but soft metal, is more than a raw material for making jewelry. One of the least chemically reactive and most malleable of the noble metals, gold’s high electrical conductivity makes it ideal for applications in electronics, medicine, and scientific research.

Over the last decade, Livermore materials engineers working at the nanoscale have uncovered techniques for generating metal aerogels: a unique, emergent class of lightweight, low-density, super-porous but durable materials that present huge potential advances for scientific research and industrial applications. Now, a team of Livermore researchers has given gold a new incarnation as an aerogel “foam” that is literally lighter than air.

Researchers have developed experimental metal aerogels of nickel, cobalt, copper, and silver in order to initiate, facilitate, and speed up chemical reactions, as well as assist in filtration. With their high mechanical rigidity, they can also serve as microscopic support structures for enzymes and other proteins embedded within their micrometer-scale pores as they react to other biomolecules. As scientists have realized the significant advances these aerogel metals present, researchers at Lawrence Livermore and around the world have been competing to uncover an efficient and inexpensive method to produce large quantities of these aerogels—while still predictably controlling their nanoscale architecture, surface area, and pore size.

To create the first aerogels, researchers used “sol-gel” chemistry: a process that synthesizes solids from a colloidal suspension by converting molecular precursors into nanometer-sized particles that link up, forming a spaghetti-like three-dimensional liquid-filled network. Freeze-drying removes the liquid, leaving behind a porous low-density aerogel that looks like a stale marshmallow, but is referred to as a “monolith.” The sol-gel method, however, did not produce the robust, high-quality ultralight monoliths the researchers needed. A radically new approach was required.

In 2016, a Laboratory team led by materials scientist Fang Qian reported a simple method for growing and purifying copper nanowires. “The research problem was how to purify these materials at a large-enough scale to manufacture nanofoams,” says Qian. As the building blocks of metal aerogel, nanowires need to be produced in large enough batches to serve as raw material for producing monoliths of aerogel. Nanowires are typically on the order of 20 to 30 micrometers (μm, millionths of a meter) long and just 20 to 30 nanometers (nm) in diameter&mdasyabout a thousand times thinner than a strand of human hair. Once the purity and quantity riddle was solved, another Lawrence Livermore team developed a method of forming low-density copper nanofoams that same year. And in 2018, a Laboratory team announced the development of a method for fabricating ultra-low-density (less than 10 mg/cm3) monolithic silver aerogels.