New Life for the Nova Laser

Ignition: Taming Symmetry With the 2Shock

Second in a series of articles exploring the progress and challenges of LLNL’s Inertial Confinement Fusion (ICF) Program.

A team of physicists from Lawrence Livermore and Los Alamos national laboratories is answering an important question on an incredibly complicated problem—whether a spherical capsule can be kept almost perfectly symmetric as it implodes by a factor of 30 in radius (or a factor of 30,000 times in volume) during an ICF experiment.

Targets fielded on NIF are imploded at nearly 400 kilometers per second and compressed by a factor of 30 in radius, with the goal of reaching temperatures of more than 100 million degrees Celsius and pressures that exceed 100 billion times Earth’s atmosphere.

Keeping the implosion nearly spherical while compressing so much in size is considered one of the hardest problems in ICF, not least because small imperfections get amplified and, if too large, can prevent ignition. 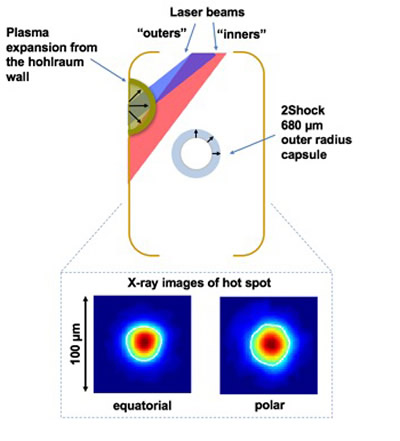 The large “case-to-capsule” ratio, or size of the hohlraum relative to the capsule in the 2Shock design, provides enough room for the inner laser beams to propagate to the walls of the hohlraum and deposit energy there, driving a symmetric implosion as seen from both the equatorial and polar lines of sight.

“This has been a difficult problem because there are so many moving parts in an implosion, and we have to stay spherical from beginning to end,” said experimental physicist Joe Ralph. “The question has been, how do you symmetrically compress a target capsule at those enormous velocities but keep it from squishing out of shape?”

The NIF “2Shock” campaign has made significant progress in answering this question. After seeing that certain non-ignition high-energy-density (HED) experiments resulted in symmetric implosions, physicist Steve MacLaren proposed making changes to support the addition of a cryogenic layer to test models of ICF that form the “hot spot” out of an initially cold layer of deuterium-tritium fuel. This effort was supported by MacLaren’s selection by LLNL’s Early and Mid-Career Recognition Program.

“By taking this HED platform, we could use it to see if we could get a round implosion with a cryogenic layer and see how it performed,” said MacLaren, who is the campaign lead for the 2Shock platform.

The 2Shock platform uses a standard-sized hohlraum, but it holds a 680-micron-radius target capsule—about 40 percent smaller in radius than a standard ignition-scale target. This change in scale has several advantages. A larger hohlraum-to-capsule ratio means more clearance between the capsule and the walls, allowing the laser beams to more easily enter the hohlraum and create a symmetric x-ray bath for the capsule. It also easily allows the capsule ablator, or capsule shell, to be thicker than a standard ignition target and resist deformation from hydrodynamics seeded by engineering features such as the supporting tent or fuel fill tube.

“Our hypothesis was that if we could control these imperfections, we could recover what one-dimensional simulations were telling us we could get in terms of capsule performance even when we implode something by a factor of nearly 30,000 in volume,” MacLaren said. “That’s what we set out to do, and ultimately that’s what we were able to show. This is really quite an important result for ICF.”

In addition to achieving nearly perfect symmetry, the 2Shock implosion matches the simulated values in nearly all the fundamental parameters necessary in ICF—burn width, hot-spot size and neutron yield—the last of which saw a major bump to 93 percent of predicted yield, compared to less than 50 percent, which is typical of cryogenic layered implosions.

“We learned that when we design for something in a safe region, far from where the performance cliffs are, our experiments match our simulations quite well, and can match nearly all of the performance metrics,” said physicist Laurent Masse, a designer for the campaign. 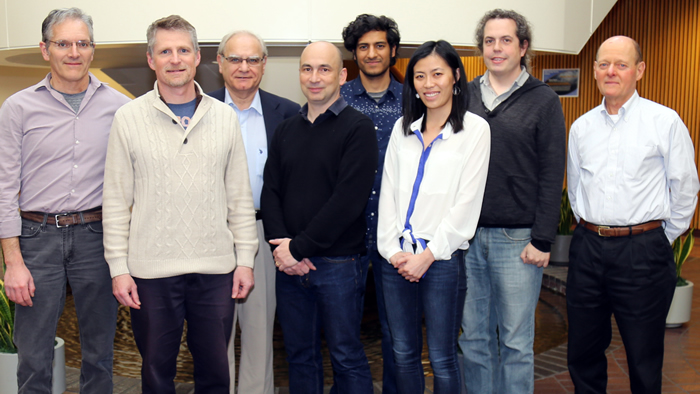 “Some of this discrepancy is due to known effects not included in the simulated diagnostic signature, but we’re not sure how much until we’ve completed the analysis to compare like with like,” said Jay Salmonson, another design physicist for the project.

A suite of five NIF neutron time-of-flight (nTOF) diagnostics gives the 2Shock team the ability to measure this variable along different lines of sight and gain insight into whether the fuel is moving around more than is desirable because of asymmetries or other imperfections.

“The premise of these diagnostics is that the neutrons coming from the burning region are produced in a fraction of a blink of an eye—100 picoseconds, essentially instantaneous when compared to the flight time of the neutron to the detector 20 meters away,” said Gary Grim, scientific lead for NIF nuclear diagnostics. “This allows the nTOFs to measure the spread of neutron arrival times with extremely high precision, and convert this to an average ion temperature using a simple physical model of the plasma.

“The 2Shock platform is unique in that the arrival time spread is in much better agreement than other platforms,” Grim said, “and more like the conditions that we need to achieve if we are going to obtain ignition.”

While the 2Shock campaign was meant to demonstrate symmetry control and match simulations, even when the capsule is compressed by a factor of 30 in radius, it was not designed to reach ignition. Looking ahead, the team plans to begin to apply these lessons toward ignition by scaling up the platform to explore the self-heating regime, in which the products of the fusion reactions deposit their energy back into the hot-spot, an important mechanism in reaching ignition.

“Our goal is to increase the capsule size modestly to a 900-micron radius, and make some improvements in the pulse shape,” MacLaren said. “Pushing the implosion into the self-heating regime will allow us to demonstrate that we can reproduce the one-dimensional-like performance in an implosion that actually shows that it is self-heating.”

New Life for the Nova Laser

From 1984 to 1999, LLNL’s 10-beam Nova Laser ruled the roost as the world’s highest-energy laser system. Nova was the world’s first petawatt (quadrillion-watt) laser, and it held sway until the late 90’s, when it was dismantled to make way for its successor, the 192-beam National Ignition Facility.

Dismantled, but not forgotten. Parts of Nova have lived on and found new uses at laser facilities in Europe. The target chamber was loaned to France in 1999 to serve as an interim component of the Megajoule Laser, the French equivalent of NIF near Bordeaux. 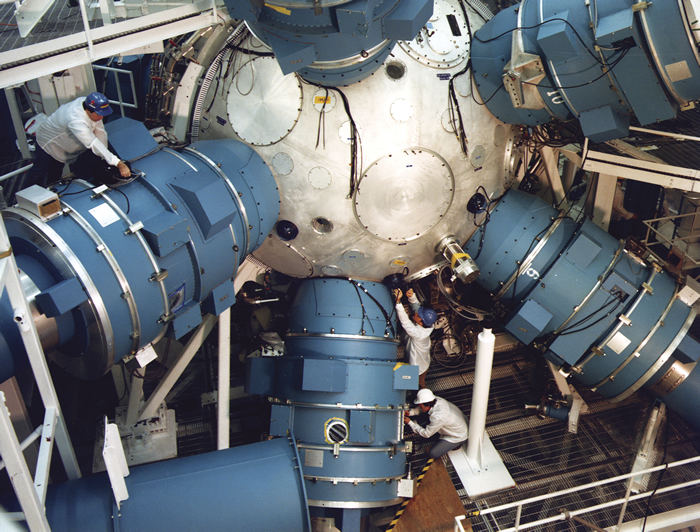 The Nova Target Chamber. In 1986, Nova produced the largest laser fusion yield to that time—a record 11 trillion fusion neutrons. The following year, Nova compressed a fusion fuel target to about one-thirtieth of its original diameter, close to that needed for ignition and fusion gain.

In 2002, many Nova parts were shipped to the GSI Helmholtz Centre for Heavy Ion Research near Darmstadt, Germany. GSI received the 32-centimeter amplifiers (housing, flashlamps and glass) from two of Nova’s main amplifier chains, including the spatial filters, parts of the mid-chain diagnostics boxes, and the Faraday isolator. The package came with pulsed-power components—ignitrons, capacitors, and power supplies. The components were installed on GSI’s PHELIX laser (Petawatt High Energy Laser for Heavy-Ion Experiments), and the first experiments with Nova parts were conducted in 2004.

And now, the PHELIX laser with its Nova components is the site of a productive collaboration between GSI and LLNL researchers. The scientists recently completed a successful platform development experiment to enable future nuclear science experiments at short-pulse laser facilities. The experiment utilized laser-accelerated proton beams (five to 20 MeV) from the PHELIX laser in combination with radiochemistry-based isotope analysis to study nuclear reactions (the first observation of laser-accelerated protons occurred during experiments at LLNL laser facilities). 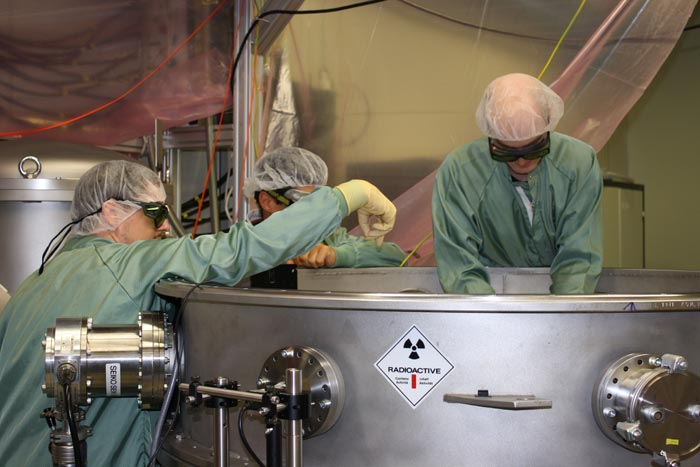 Researchers insert a target assembly into the PHELIX laser beamline at the GSI lab near Darmstadt. Credit: GSI

The PHELIX experiment was a joint effort between laser/plasma researchers from the GSI led by plasma physicist Paul Neumayer, NIF collaborators led by Dieter Schneider, and John Despotopulos, a radiochemist from LLNL. Despotopulos and radiochemists from the Super Heavy Element research group at GSI led by Alexander Yakushev set up the isotope detection system. The experiment demonstrated an efficient collection of isotopes produced in nuclear reactions with laser-driven MeV proton beams; 40 shots were used to demonstrate isotope collection efficiency and reproducibility.

Schneider noted that GSI currently is building one of Europe’s most advanced research facilities, the Facility for Antiproton and Ion Research (FAIR). “The facility is a particle accelerator/storage ring complex that provides unprecedented capabilities to conduct cutting-edge research in new domains of states of matter,” he said. “This includes the physics of antimatter, of nuclear matter under extreme conditions—for example, quark-gluon plasmas—and plasma-mediated nuclear physics processes such as supernova science, as well as related applications in nuclear astrophysics and space sciences.”

The research will reveal valuable information about the states of matter at extreme densities and temperatures, Schneider said, “uniquely complementing the information that neutron stars provide through astronomical and gravitational-wave observations. This will motivate new theoretical plasma dynamics simulations as well as nuclear theory and high-performance-computing simulations for relativistic heavy ion collisions.”

Schneider was awarded a visiting professorship at the ExtreMe Matter Institute (EMMI) at GSI and the Frankfurt Institute for Advanced Studies as a result of his long-standing research collaboration and service on GSI advisory boards.