A Broadening Career in Science 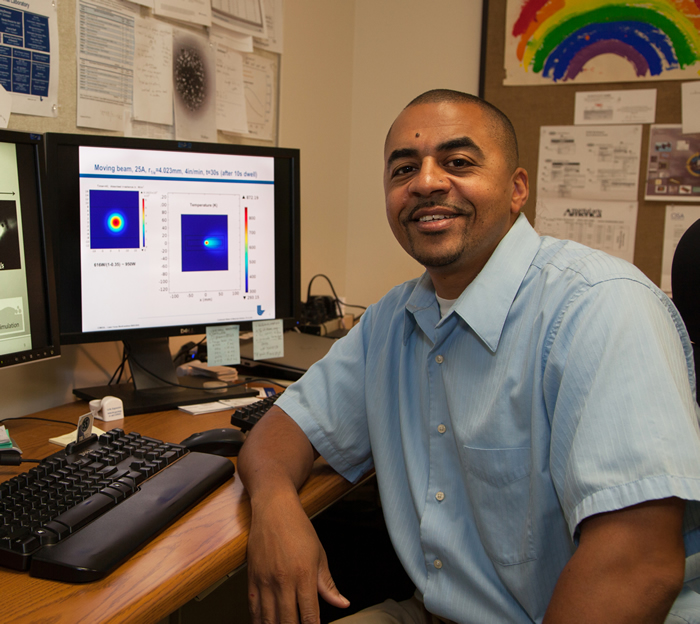 With a background in optics and microscopy and a passion for research, Manyalibo (Ibo) Matthews was a natural fit for NIF when he came to work at LLNL in 2006. But his love of science wasn’t always plain to see when he was a child.

Matthews grew up in Berkeley, California, after his family moved to the West in the 1960s. His uncle was a scientist, but it was one of his high school teachers, Mr. Hubbard, who really introduced him to the world of science. Despite not taking high school seriously in his freshman and sophomore years, Matthews seemed to breeze through his science classes and continued to receive encouragement from his supportive teacher. At the time his close friends were pursuing other “career paths”—often on the wrong side of the law—that Matthews knew were not for him. But in his junior year, he made a change that would impact his scientific career for good: “I decided I had to take all classes seriously if I was going to have a chance to continue studying what I loved, science,” Matthews said.

As the first member of his immediate family to go to college, Matthews recalls that he was “nervous going to UC Davis,” but he did well and became involved in campus life after his first year—grading calculus and physics papers, picking up out-of-state summer internships, and most notably joining Alpha Phi Alpha fraternity, where he participated in community outreach and service projects, ultimately serving as the chapter president in his senior year. Outreach opportunities afforded by the fraternity and campus activity boards increased his awareness of minority student needs, especially those involved in science.

With universities putting out the welcome mat for this young and ambitious graduate with a degree in applied physics, Matthews had decisions to make that would shape his future. He applied to more than 10 universities after studying and ranking them, and MIT rose to the top of the list. Although MIT didn’t entice him like the others, he was elated to receive the acceptance letter and describes the feeling as “a dream come true.”

Matthews continued to spend much of his college career helping others succeed while he pursued his PhD in experimental condensed matter physics. Through outreach programs, services and activities, he took aim at helping fellow students reach their collegiate goals. As mentoring became second nature to him, he was able to serve as a resident advisor in an MIT undergraduate dormitory—encouraging classmates to take breaks, stay balanced, and network among themselves—all keys to staying in tune with the demands of courses and other MIT stresses.

“There are extreme pressures with undergrads to be top of their class, a pressure-cooker environment,” Matthews says. He took this as an opportunity to give back what he received as an undergraduate by helping others succeed, especially during the first year of college, which he describes as “boot camp” or “extreme training” at MIT. 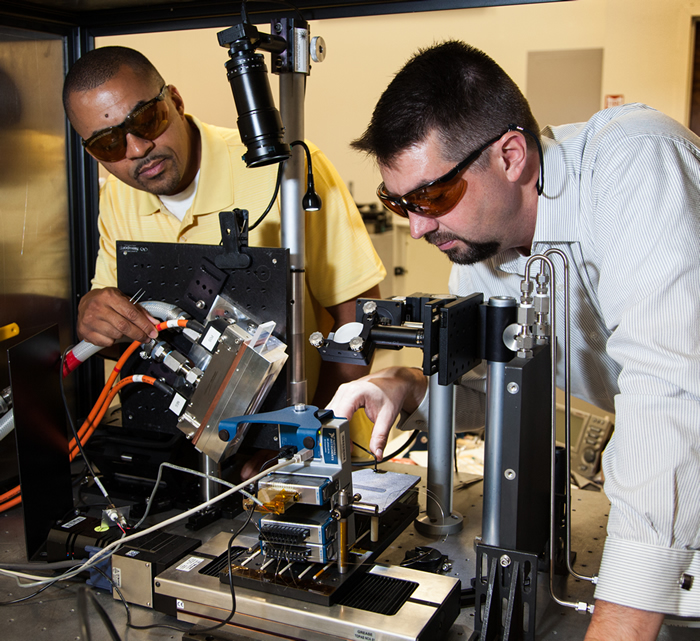 Ibo Matthews and Cdr. Brad Baker of the U. S. Naval Academy adjust a 795-nanometer, four-kilowatt continuous wave diode laser array in the Bldg. 272 optics lab. The laser array was used to preheat and test heat transfer on a plate of HY80 steel often used in submarines and ships (see “Using Lasers to Improve Welding Efficiency”.

As the East Coast began to grow on him, Matthews landed a postdoc appointment at Bell Laboratories in Murray Hill, New Jersey. Opportunities to pursue his work in industrial research were somewhat limited but still viable, as he began to explore optics and other growth areas. He began working on two microscopy techniques to study optical devices—near-field scanning optical microscopy and confocal scanning microscopy/spectromicroscopy—and found that most of the research at Bell was focused on the properties of optical devices and optical materials in telecommunications.

He later studied stress-induced birefringence (rotation in optical polarization due to anistropic refractive index) in optical waveguides and showed how doping of the glass can counteract the birefringence. His research also included studying the dopant concentration profiles of optical fibers and parasitic upconversion (optically-pumped electronic transitions which do not contribute to optical amplification) in phosphorus-erbium-doped fibers. He extensively used Raman spectroscopy and group theory in support of a number of small projects to explore the bonding of atoms and materials and the structure of their properties. Matthews also studied gallium nitride devices, developed microscopy techniques to study carrier concentration profiles, and studied a type of performance degradation in optical transmission fibers known as mode partition noise. And he found time to serve as program director for an inner city youth program, Young Science Achievers, which issued small grants to high school students and paired them up with Bell Labs researchers as mentors.

While Matthews made good connections at Bell Labs, the focus of the parent entity, Lucent Technologies, gradually shifted toward optical networking production and development as opposed to materials research, leaving him far removed from his research passion. Former LLNL principal associate director of Science and Technology Cherry Murray, whom he met briefly at MIT and later at Bell Labs, spoke to Matthews about a possible future at the Laboratory.

Inevitably, with a strong desire to be back with his family on the West Coast and his drive to focus more on research, he separated from Bell Laboratories in 2006 and headed west.

With NIF under construction at the time, there was a need to study optical materials and to understand the effects of the intense ultraviolet light from NIF’s lasers on the optics in NIF’s final optics assemblies. Matthews joined the Laboratory’s Physical and Life Sciences Directorate in 2006 and was matrixed into NIF immediately. He went to work with the Optical Damage Group led by Mary Spaeth and Dick Hackel, characterizing, understanding, and finding ways to prevent damage to NIF optics and to repair damage when it does occur.

Currently, Matthews is leading a Laboratory Directed Research and Development (LDRD) project aimed at understanding optics contamination, and he recently started another LDRD effort to investigate the physics of selective laser melting for additive manufacturing (see “Developing Algorithms for Laser-based 3D Metal Printing”). “Our LDRD project seeks to do more detailed experiments on metal-based additive manufacturing than what has been done (previously),” he explains.

And continuing with his tradition of mentoring and outreach, he helps coordinate visits to the Laboratory by middle and high school students and young adults from economically disadvantaged communities under the auspices of Green Technical Education and Employment. Green Tech is a non-profit community-based organization in Sacramento charged with providing the students with quality workforce skills and educational opportunities, as well as healthy strategies to maintain sustainable communities (see “Students enjoy ‘phenomenal’ day at the Lab”).

Outside of work, Matthews and his wife can be found with their active six- and eight-year-olds, cooking, or pursuing their musical talents on the saxophone and piano.

Asked how it feels working for a national laboratory, Matthews says, “It has been rewarding working across the Lab,” and he’s excited about branching out to other laser projects, such as examining applications of lasers for industry and helping broaden the NIF & Photon Science directorate’s industrial partnerships portfolio.

Reflecting on his early childhood, Matthews says, “Science saved me.” Indeed, science had a place for Ibo Matthews and his many contributions to the field—and his fellow scientists.