The diode arrays are a key component of the High-Repetition-Rate Advanced Petawatt Laser System (HAPLS) under development at the Laboratory. When completed, the HAPLS laser system will be installed in the European Union’s Extreme Light Infrastructure (ELI) Beamlines facility now under construction in the Czech Republic. 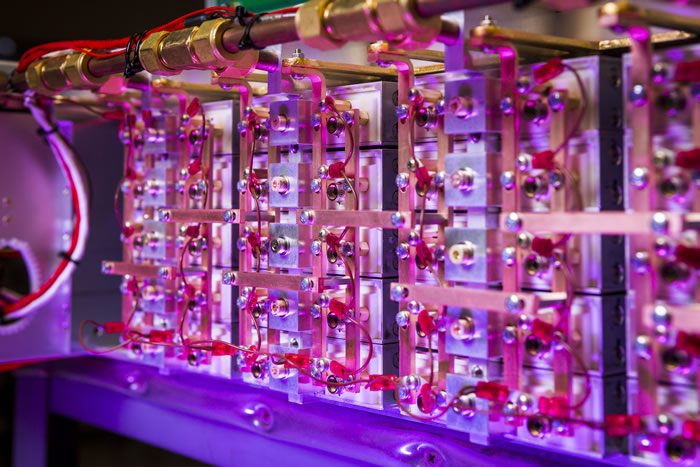 To drive the diode arrays, LLNL needed to develop a completely new type of pulsed-power system, which supplies the arrays with electrical power by drawing energy from the grid and converting it to extremely high-current, precisely-shaped electrical pulses.

HAPLS is designed to be capable of generating peak powers greater than one petawatt (1 quadrillion, or 1015, watts) at a repetition rate of 10 Hertz, with each pulse lasting 30 femtoseconds (30 quadrillionths of a second). This very high repetition rate will be a major advancement over current petawatt system technologies, which rely on flashlamps as the primary pump source and can fire a maximum of once per second. In HAPLS, the diode arrays fire 10 times per second, delivering kilojoule laser pulses to the final power amplifier. After HAPLS is commissioned at LLNL it will be installed and integrated into the ELI Beamlines facility starting in 2017.

To meet the rigorous design specification for HAPLS, LLNL researchers had to look beyond current laser pump technology. In previous high-energy scientific laser systems such as NIF, intense flashes of white light from giant flashlamps “pump” the laser-active atoms in large slabs of laser glass to a higher or more “excited” energy state. In order to get to the high repetition rate required by HAPLS, the team needed to use technology that transfers less heat than flashlamps and removes it at faster rates, shortening the time between laser shots. 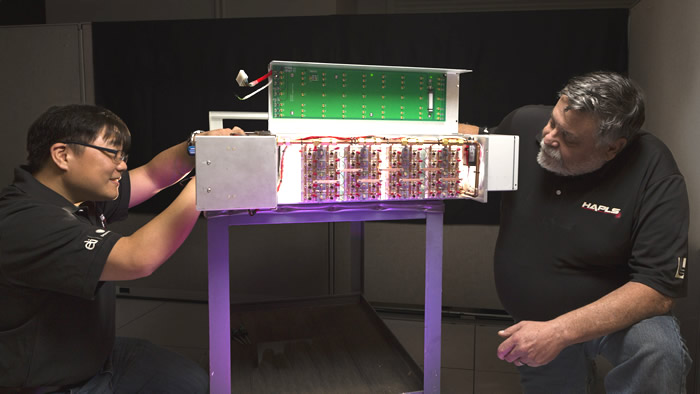 “Flashlamp technology for lasers has been around for more than 50 years, and we’ve pretty much pushed the limits of that technology and maxed out what we can do with them,” said Andy Bayramian, systems architect on HAPLS. “We’ve closed the book on flashlamps and started a new one with these laser diode arrays, enabling a far more advanced class of high-energy laser systems.”

“We are thrilled to be working with LLNL, who continues to push the boundaries for high-energy laser systems,” said Lasertel President Mark McElhinney. “Our collaboration has enabled several new benchmarks for laser performance to be set in a remarkably short period of time. This is a validation of the significant progress that has been made toward the routine production of high-energy lasers for revolutionary commercial applications and groundbreaking scientific research.”

LLNL also needed to develop a completely new type of pulsed-power system in order to drive the diode arrays. The pulsed-power system supplies the arrays with electrical power by drawing energy from the grid and converting it to extremely high-current, precisely shaped electrical pulses. Each power supply is capable of driving 40,000 amps. Livermore holds a patent on this technology (see “HAPLS Diode Power Delivery System Components Demonstrated”).

High-average-power, high-energy laser systems enabled by these technologies will drive international scientific research in areas as diverse as advanced imaging, particle acceleration, biophysics, chemistry and quantum physics, in addition to national security applications and industrial processes such as laser peening and laser fusion.

LLNL and General Electric have received funding to develop and demonstrate open-source algorithms that will allow selective laser melting (SLM) to produce high-quality, durable metal parts. SLM is a metal powder-based additive manufacturing (AM) process in which a 3D part is produced layer by layer, using a focused, high-energy laser beam to fuse the metal powder particles together.

The $540,000 award is from America Makes, the National Additive Manufacturing Innovation Institute focused on helping the United States grow its capabilities and strength in 3D printing. America Makes is funding the GE Global Research-LLNL project to develop AM technologies that allow more public- and private-sector organizations to enter the field. 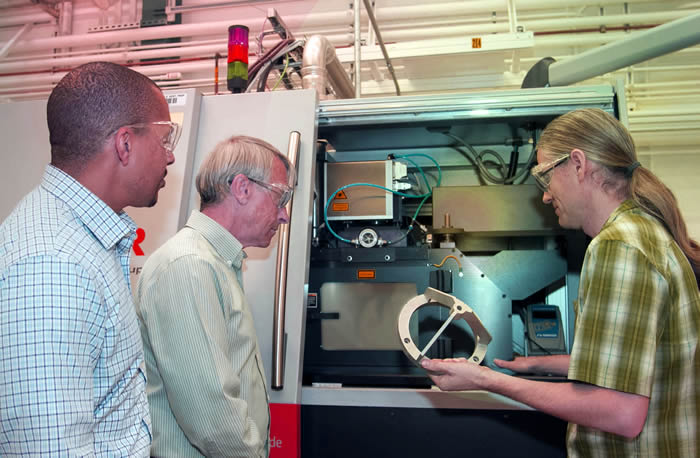 There is now no common approach to SLM that comprehensively reduces problems associated with this method such as surface roughness, residual stress, porosity and micro-cracking. Without careful optimization of the process, these issues may cause parts to fail.

“With the SLM processes in place now, you don’t always end up with a part that is mechanically robust, particularly in terms of dynamic properties,” said Ibo Matthews, a NIF&PS/Physics and Life Sciences researcher working with LLNL’s Accelerated Certification of Additively Manufactured Metals (ACAMM) Strategic Initiative team who is leading the Lab’s effort on the joint project. “It’s critical to have process reproducibility, especially for applications in industries such as aerospace and energy, where inconsistency could lead to major problems.”

In order to print a 3D part using the SLM process, the user must enter data into the printer using a stereolithography (STL) file, which is a digitized 3D representation of the desired build. “Ideally, you would send the STL file to an arbitrary 3D printer and it will print out parts that are consistent in terms of dimensions and material properties,” Matthews said. “Currently, that doesn’t happen.” 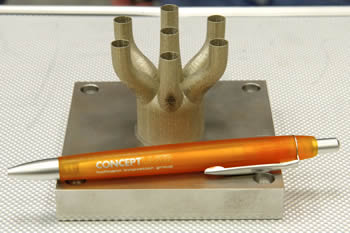 The first test piece produced on a new SLM machine recently installed at NASA’s Marshall Center. The machine will be used to build parts for the Space Launch System, the next generation of rockets which are designed to carry astronauts beyond low Earth orbit to deep-space destinations such as an asteroid and eventually Mars (pen included to show scale). Credit: NASA/MSFC/Andy Hardin

That’s partly because errors appear during the initial translation of the STL file, requiring the user to fill in missing information as well as specify the type of powder material used. To further complicate matters, traditional printer designs treat every layer of powder the same, without giving consideration to the thermal properties of the powder. Some printer systems provide more control than others.

In an ideal system, different layers would demand different laser scanning speeds and powers because the powder environment is changing as the layer-by-layer buildup proceeds.

“Commercial SLM machines do not permit access to specific process parameter information and tool paths,” said Bill Carter, a researcher with GE’s Additive Manufacturing Lab, which is under GE Global Research. “This limits the ability of researchers to perform controlled validation experiments that support modeling work and process development. The cooperation of GE and LLNL will result in a demonstration of the new protocol on several research machines, paving the way for more robust process control and optimization strategies.”

“If you were able to process a 3D part by telling the machine what are the right laser parameters for optimizing the heating and melting for each layer,” Matthews said, “then the overall manufacturing process can be made more robust and efficient.”

Leveraging the capabilities of the Laboratory’s High Performance Computing and its expertise in lasers, Matthews and his GE colleagues are developing software algorithms that will be compatible with all 3D printers that produce metal parts. This software will be able to control the scan laser’s parameters—such as beam size, scan rate and power—on the materials, its powder characteristics and the detailed shape of the part being printed.

“There are a number of SLM machines out there,” Matthews said, “but there isn’t a common software tool kit that allows them to produce standard parts that are consistent in terms of material properties.”

Because the software will be available to the public, Matthews hopes it will lead to more breakthroughs in the AM industry. “If we can lower the barriers to entry, we can help U.S. companies, universities and research labs make further advances in additive manufacturing,” he said.

GE and LLNL are tasked by America Makes to develop the software algorithms in the next 18 months.