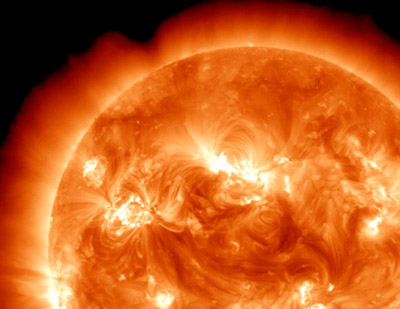 Fusion is the process that powers the sun and the stars.

Fusion describes what happens when the nuclei of light atoms overcome the electrical resistance that keeps them apart and get close enough to activate the strong nuclear force that holds them together, or “fuse.” When fused, they form a bigger nucleus; two elements combine to create a different element at the level of the nucleus. Making elements fuse requires an enormous amount of heat and pressure, like that found in the cores of the sun and stars.

One of NIF’s goals is to create a self-sustaining nuclear fusion reaction, in which the nuclei of two forms of hydrogen fuse together and produce a single heavier nucleus of helium, while converting some of the mass lost in the reaction into incredible amounts of energy (in a sense, mass is highly concentrated energy). This is something scientists have been working to achieve in the laboratory since the 1950s.

Nuclear fusion is also different from nuclear fission, where the nuclei of heavy elements like uranium are split, forming two lighter elements—the process used in today’s nuclear power plants. In both nuclear reactions, the elements themselves change and become new elements; and in the process, a small amount of mass is converted to a large amount of energy, as Einstein revealed in his historic formula E=mc2.

Fusion “ignition” refers to the moment when the energy from a controlled fusion reaction outstrips the rate at which x-ray radiation losses and electron conduction cool the implosion: as much or more energy “out” than “in.” Achieving ignition would be an unprecedented, game-changing breakthrough for science and could lead to a new source of boundless clean energy for the world.