If copper was found in the core of Saturn it would have the same crystalline structure as the copper pipes found in many homes, according to a new study on NIF by LLNL and Johns Hopkins University researchers. 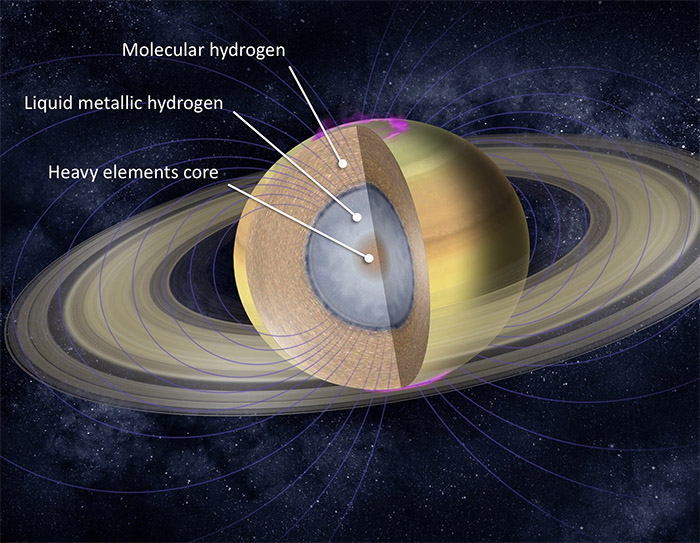 Saturn has a deep inner core made mostly of heavy elements, with a liquid metallic hydrogen envelope, surrounded by a molecular hydrogen layer. Credit: UC Berkeley/NASA/JPL-Caltech (Click to enlarge)

In a paper published on Jan. 9 by Physical Review Letters, the research team revealed that copper maintains its crystalline structure at pressures ranging from one atmosphere (room pressure) to more than 30 million atmospheres.

Using NIF, the team compressed microscopic copper samples—thinner than a human hair—to pressures of 30 million atmospheres in less than a billionth of a second. These extreme conditions tripled the sample’s density, creating the densest object on the planet for a brief moment in time.

“Achieving this microscopic size and these short-lived conditions was a feat unimaginable before the advent of modern engineering,” said LLNL physicist Dayne Fratanduono, lead author of the paper.

“Today,” he said, “experimental physicists can generate and probe the complex behavior of materials at pressures surpassing the conditions found deep within the cores of Saturn and Jupiter. Generating such extreme states of matter requires confining large amounts of energy into extremely tiny volumes, which we accomplished using NIF, the largest and most energetic laser facility in the world.”

During the experiment, they tracked the copper sample traveling at 50,000 miles per hour using a velocity interferometer—the world’s most sophisticated radar gun.

“Producing high-energy-density states of matter is easy to achieve in practice, but extremely difficult to accurately measure, and NIF is one of few facilities in the world currently capable of performing such measurements,” Fratanduono said. 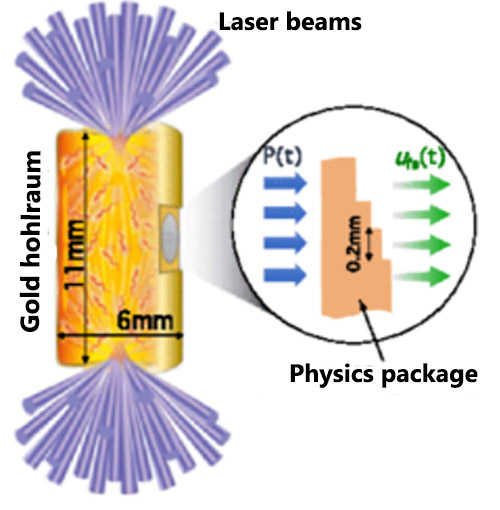 The target design: A multistepped copper physics package is mounted on the equator of 11×6-millimeter hohlraum.

“These unique, precision capabilities enable us to benchmark the compressibility of copper to extreme conditions, so that other scientists in high-energy-density physics may utilize copper as a high-precision standard—much like the National Institute of Standards and Technology provides well-calibrated standards to industry, academia, and government.”

To determine how copper stiffness responded to increasing pressure, the research team took a series of x-ray images to monitor the crystalline structure as the copper compressed. They also measured how the speed of sound waves changed as the copper was squeezed. From these measurements, the team benchmarked the behavior of copper at extreme conditions and developed a microscopic interpretation of its quantum behavior.

“Our experiments have shown that we are able to accurately predict the behavior of copper to extreme conditions,” Fratanduono said, “and we suspect that this behavior may be common amongst the other noble metals—metals that possess nearly spherical electron orbitals with one conduction electron per atom.

“Future work will test our understanding of the quantum behavior of materials at extremes and examine the behavior of more exotic materials,” he said.