On May 29, the NIF Team fired two gigabar (Gbar)-class equation-of-state experiments in collaboration with the Roger Falcone Group in the Physics Department at UC Berkeley for the NIF Discovery Science program. In these experiments, the material at the center of the NIF targets is subjected to stunning pressures approaching a gigabar, or a billion Earth atmospheres, at the peak of its compression (the equation of state is the relationship between the target’s pressure, density, and temperature).

The first experiment in the Gbar series used a near-vacuum hohlraum; inside the hohlraum was a solid plastic ball doped with germanium in a graded doping profile. The experiment used a reduced laser drive for a Hugoniot measurement in the 40-150 megabar (Mbar) range to provide a better comparison with data from previous experiments on the NOVA laser, NIF’s predecessor (the Hugoniot curve is a plot of the increase in the material’s pressure and density under strong shock compression).

(Left) A Gbar target mounted in the cryogenic target positioner. The backlighter target on the right creates the x-ray source used to radiograph the shock wave during compression. (Right) Streak camera image from the first Gbar experiment shows a spherically converging shock wave in a solid plastic ball recorded over a seven-nanosecond time duration.

The goal of the second shot was to radiograph the shock wave in a one-millimeter-diameter plastic-coated solid ball of high-density carbon (HDC) as it was subjected to the immense ablation pressure in the hohlraum. All 192 beams delivered 900 kJ of 3ω (ultraviolet) light to the near-vacuum hohlraum and backlighter at a peak power of 341 terawatts (TW). Excellent radiography data were obtained. This experiment was the first measurement of the high-pressure Hugoniot of carbon at pressures up to 0.55 Gbar.

Other Highlights of May Experiments on NIF

The NIF Team completed 31 laser shots, including 19 target shots, during 19 shot days in May. As of the end of May, a total of 97 target shots had been completed in the current fiscal year. Here are some highlights:

The 2D convergent ablator drive hohlraum with its backlighter target (the small foil target to the left of the hohlraum) for the May 1-2 experiment. The backlighter illuminates the capsule during the implosion to track in-flight aspect ratio and implosion speed. 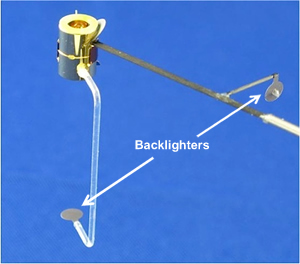 Photo of the first Toto target shows the drive vacuum hohlraum with radiation shields and the polar and equatorial backlighter targets used to radiograph the silicon-dioxide foam capsule.

Fabrication of the first beryllium (Be) target capsules (ablators) for NIF experiments is under way in the Bldg. 298 target development facility. NIF ablators to date have been made of germanium or silicon-doped plastic, or undoped diamond-like high-density carbon (HDC). Beryllium is believed to present another, possibly more attractive, ablator material option. The low opacity and relatively high density of Be may lead to higher rocket efficiencies, giving a higher fuel implosion velocity for a given x-ray drive; and to higher ablation velocities, providing more ablative stabilization and reducing the effect of hydrodynamic instabilities on implosion performance.

The Be capsules are made of inner and outer layers of pure beryllium with three thin intermediate layers of beryllium alloyed with a small percentage of copper for greater capsule mass; the total thickness is about 150 microns. The capsules are fabricated in batches of 15 over two weeks of 24-hour-per-day machine operation, including set-up times. The first experiment with a Be target capsule is scheduled for later this summer. 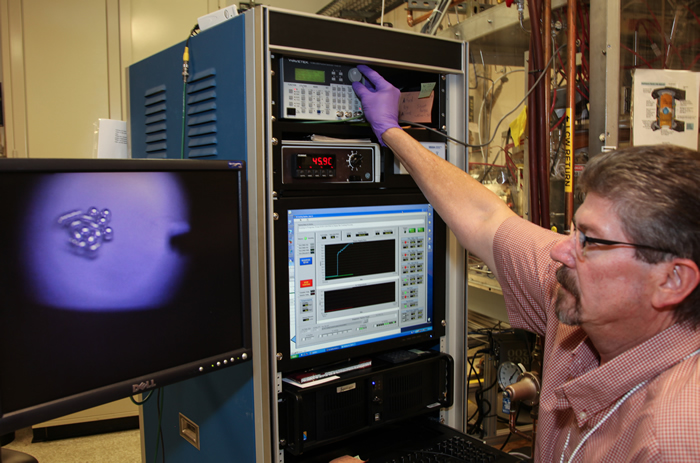 NIF Scientific Associate Craig Alford refines the settings during the sputter coating over a polymer mandrel of beryllium target capsules in the Bldg. 298 target development facility. On the monitor is a real-time view of the capsule coating process, showing the movement on a vibrating and rotating platter in the sputtering chamber to provide a constantly fresh surface for an even and dense coating. Alford is adjusting the vibration levels, which must be high enough to prevent “sticking,” but not high enough to throw the spheres off the platter.

The first of seven weekly facility maintenance and reconfiguration (FM&R) periods was conducted from May 9 to 11. These maintenance periods are an effort to evaluate two types of NIF operations schedules—one starting the shot week on Sunday night, with shots running through Friday morning, and the other conducting maintenance from Friday morning through Sunday afternoon. The new schedules are part of NIF’s overall goal to make more shot days available for experiments.