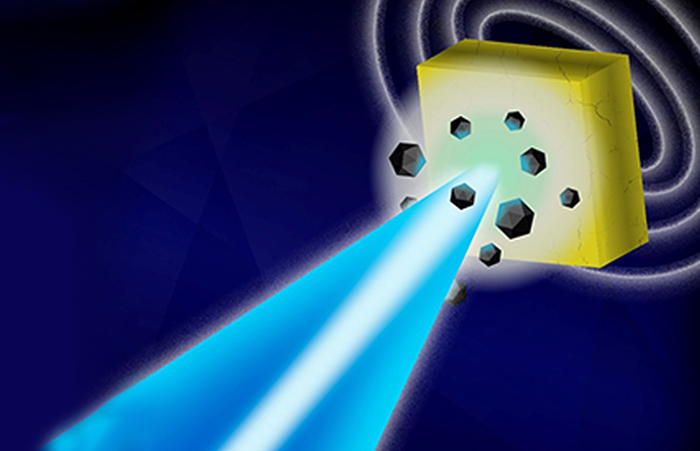 The following is an excerpt from an article by Suzanne Storar in the January/February 2022 issue of Science & Technology Review:

How can researchers know what happens within the first few nanoseconds of a chemical reaction? Computational tools offer predictions about reaction behaviors. However, slowing time to watch a high-explosive reaction nanosecond by nanosecond and measure the evolution and phase change of solid reaction products is not possible.

Directing NIF’s long-laser drive and two x-ray probe beams at a non-detonable sample of high explosive provided data detailing the chemical evolution of a laser-driven high explosive over less than 50 nanoseconds. Precise diagnostics developed by Livermore researchers captured, for the first time, temporally and spatially resolved data to study the formation of solid carbon products (condensates) produced by the reaction and confirm their atomic structure.

“The successful shot demonstrated the diagnostics are capable of characterizing the chemistry and pressure states of high explosives, in situ, during a reaction,” says Samantha Clarke, lead scientist for the NIF experiment. “The team could not be more pleased with the outcome.”

Until this experiment, the atomic structure of condensates produced by this type of high-explosive reaction had only been analyzed post-detonation or calculated by Livermore’s physics and thermochemistry codes.

“The experimental data, in turn, validates and improves predictive models such as Livermore’s Cheetah thermochemical code and other hydrodynamic codes, improving future explosive simulations and analyses, predicting energy delivery for high explosives,” says Larry Fried, one of the developers for Cheetah.

“In addition to highlighting our capabilities and gaining unprecedented data, our success amplifies Livermore’s leadership as a National Nuclear Security Agency Center of Excellence in High Explosives and Laboratory expertise in advanced diagnostics,” says Lara Leininger, director of the Laboratory’s Energetic Materials Center.

The NIF experiment represented the final step in a three-year Laboratory Directed Research and Development (LDRD) Program project. A multidisciplinary team of physicists, experimentalists, and computational experts started work in 2017 to develop diagnostic techniques that, if successful, would provide temporally and spatially resolved data of a high-explosive reaction.

The team leveraged techniques from earlier LDRD projects to grow the large, single crystals of explosive needed in initial tests of new diagnostics and brought the project to scale based on experience with table-top, laser-driven experiments.

“Projects with ambitious goals are based on many years of experience,” says Leininger, the project’s lead investigator.