LLNL researchers have fielded a new ultrafast x-ray camera that captures time-resolved images, or snapshots, of nanoseconds-long hohlraum interactions that can influence the outcome of a NIF ignition experiment.

One of the keys to achieving ignition is coming to a better scientific understanding of what takes place when NIF’s 192 laser beams enter the pencil eraser-sized gold hohlraum through a pair of laser entrance holes (LEHs) and deposit their energy on the interior surface. The hohlraum heats up and creates soft x rays that bathe a suspended capsule containing hydrogen fuel. The capsule compresses the fuel to conditions that approximate those at the center of the sun, with the goal of realizing energy gain from nuclear fusion, or ignition. 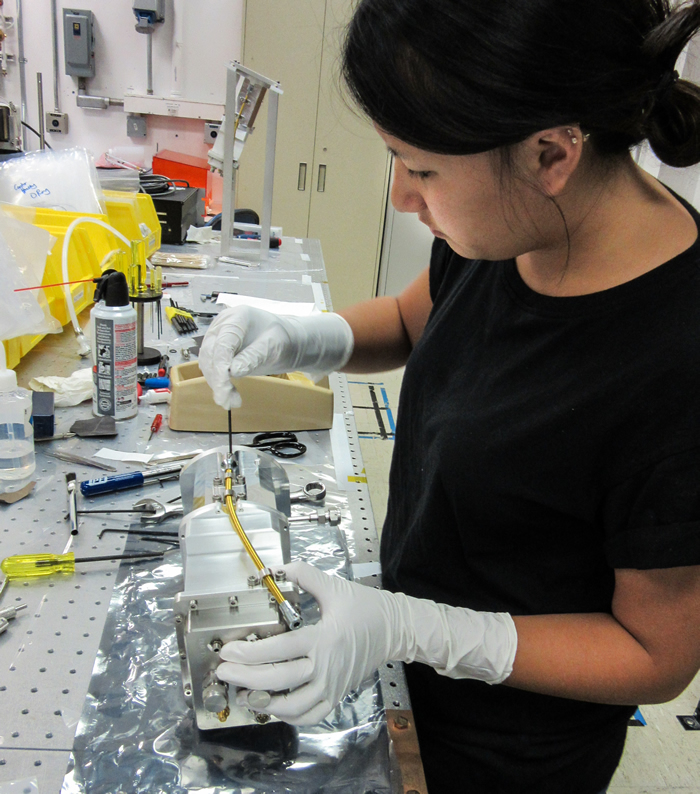 Engineering technician Mai Thao completes the final assembly of a gated LEH camera prior to its fielding at NIF. The new diagnostic is able to image dynamic processes in the hohlraum, such as LEH closure, cross-beam energy transfer, wall motion, and the development of instabilities.

Besides heating the hohlraum, the outer and inner laser beams exchange energy as they cross at the LEHs in a process called cross-beam energy transfer—altering the brightness of the inner beam spots and potentially affecting the symmetry of the implosion. Simulations show that the beams also create a growing “bubble” of gold plasma that causes a narrowing of the LEH apertures over time as the plasma blows off from the hohlraum walls. The timing of this closure is critical to the timing and shape of the laser pulse; it’s important to get as much of the laser energy as possible into the hohlraum before the LEH closes off, while at the same time not driving the implosion of the capsule too suddenly or too strongly, which could create instabilities that degrade implosion performance.

Until recently, researchers investigating these dynamic processes, which occur in a few nanoseconds or less during a 20-nanosecond NIF shot, had to depend on a diagnostic called a static x-ray imager (SXI) for a single time-integrated image of the hohlraum interior through the LEH. But last year they were able to incorporate a high-speed multi-frame x-ray imager developed by Sandia National Laboratories into the SXI; the new diagnostic, called a gated LEH imager (G-LEH), can capture two images per shot on its 1,024×448-pixel photo detector array, with integration times as short as two nanoseconds per frame.

“We used to have a CCD (charge-coupled device) camera on the SXI that was a time integration of the entire shot,” said target diagnostics engineer Nathan Palmer. “Now we can take a snapshot a couple of nanoseconds long and see what’s going on in the hohlraum.”

“The SXI and the gated LEH imager look directly inside the hohlraum to determine hohlraum performance,” added responsible scientist Hui Chen, “but the G-LEH added another dimension, the time-resolved dimension.

“What we see from this diagnostic is quite a lot of information, and it’s very fascinating,” she said. “You can see the bubble of gold plasma developing and the beam location and distribution as a function of time. You can see where the plasma is moving; you can see the hohlraum radius getting smaller and smaller. This is hohlraum physics.” 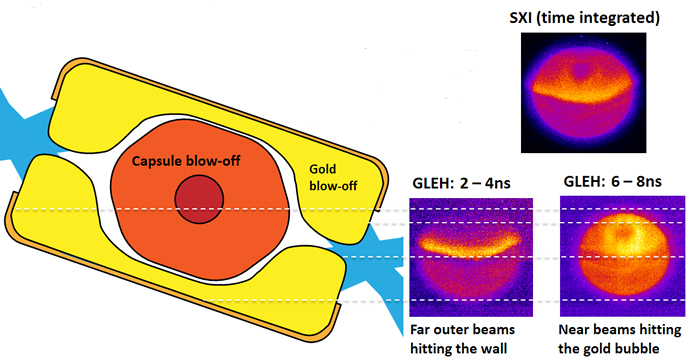 Both G-LEH and SXI, the time-integrated LEH imager, were fielded on a recent NIF shot using a near-vacuum hohlraum. The G-LEH images show dynamic processes not observable with the SXI, including LEH closure.

Since its implementation on NIF in August of last year, the G-LEH diagnostic has successfully acquired images from a variety of experimental campaigns, providing critical new information for inertial confinement fusion and high energy density experiments—the size of the LEH as a function of time, the growth of the gold plasma bubble, the change in brightness of inner beam spots due to time-varying cross-beam energy transfer, and three-dimensional asymmetries and instability growth on the hohlraum wall.

Sandia’s ultrafast x-ray imager, the camera used in the G-LEH, is a revolutionary new class of high-speed gated CMOS (complementary metal-oxide semiconductor) imagers with hybridized photodiode array. It was fielded in August of last year and has been used in more than 170 NIF experiments since then. “Now it’s just a workhorse, collecting data shot after shot,” Palmer said.

Yet in some ways the G-LEH is still a work in progress. The specification and approval process for configuring the diagnostic’s settings for use in NIF experiments was automated only last month. “We got the diagnostic out there and got it working, but we didn’t have all the full automation until just a couple of weeks ago,” Palmer said. “We have to keep putting all the pieces together to make it a smooth-running diagnostic.”

An important benefit of the new detector is its ability to provide experimental data for refining computational models of hohlraum processes. “Models can calculate how fast the LEH closes,” Chen said, “but this diagnostic sees how fast it actually closes, so this provides a benchmark for the calculations.”

Calculating the rate of cross-beam energy transfer is even more challenging; the G-LEH has provided hints to the solution but as yet no definitive quantitative data. And an explanation of the beam instability seen by the diagnostic, which can interfere with the coupling of laser energy to the hohlraum, has been equally elusive.

“We should in principle see a smooth beam,” Chen said, “because that’s what we designed the hohlraum for. But we see structure there. We still don’t know why. We have quite a bit of effort going on to understand this. If we could experimentally say what it is and why so much energy is being taken away from the laser drive, and find a way to eliminate it, then we could help with the ignition effort.” 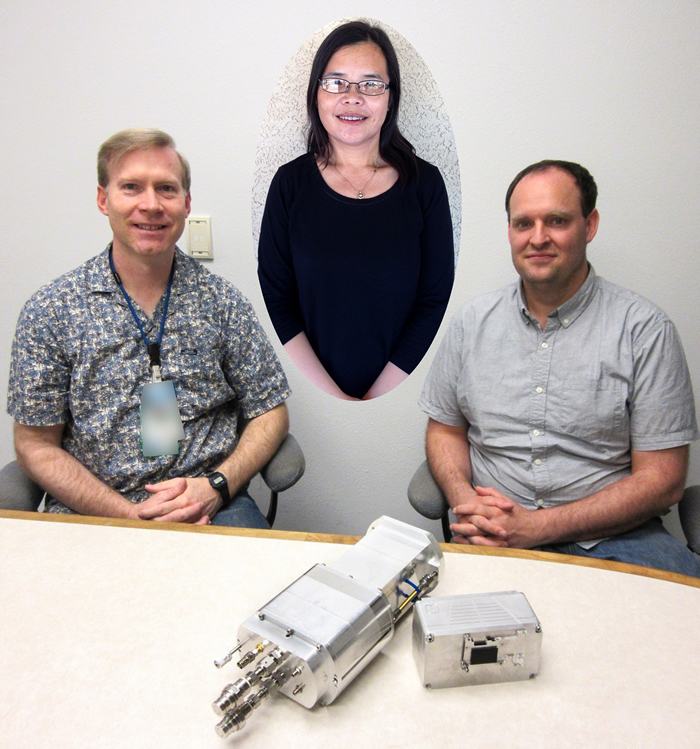 “One of the interesting things about this is that you can see the evolution of the gold bubble,” added Palmer. “It’s not symmetrical, it actually has structure, it has blobs in it. And a lot of our modeling is done in 2D models where it’s all uniform in a cylindrical sense, but that doesn’t explain how that (structure) develops. We need 3D modeling to match our 3D data here.”

Development of the G-LEH’s ultrafast imager was initiated and led by Sandia physicist John Porter to capture images of the plasma in Sandia’s Z pulsed-power facility. NIF collaborators at General Atomics suggested to Chen that it might be a useful tool for NIF.

“We are beneficiaries of all this (Sandia) effort,” Palmer said. “Now we have a device well suited to look at what’s going on, this sensor with a really short gate that lets us take these short snapshots in time. We would like a camera that could be gated even faster, of course. We’d like to take snapshots even shorter than a nanosecond, and in fact there is a development plan—they’re developing newer, next-generation sensors that will have faster gates to be able to take shorter images.”

Other new capabilities in the works, Palmer said, include sensors that can take up to 16 frames of images during an experiment. “So we’re going to add more frames, we’re going to have faster gates, and the ultimate goal is to take multiple snapshots in time and put them together as a movie to see the actual evolution of the shot.

“This was kind of the proof of principle, the demonstration that we could use this sensor at NIF to record data that was meaningful, that could tell us something about the physics.”

As word of the G-LEH’s abilities has spread, interest is growing in using the ultrafast imager in other diagnostics at NIF and in other laser facilities, such as the OMEGA laser at the University of Rochester.

“You build a better camera, they’ll beat a path to your door,” Palmer said.

LLNL research into the use of lasers to repair damaged optics and return them to service is among Laser Focus World’s “top 20 technology picks” for 2015.

The research was highlighted in the cover article in the August issue of Laser Focus World, “Processing optics using IR lasers.” In the article, LLNL physicist Ibo Matthews described how LLNL researchers used COMSOL Multiphysics, a software tool for modeling 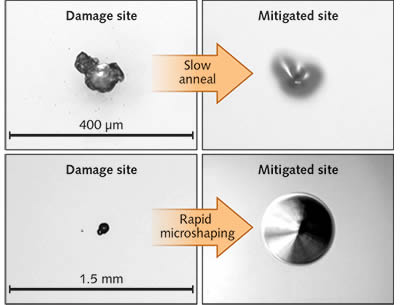 Several repair techniques have been developed at LLNL with the aim of extending the useable life of the optics. The simulations included heat transfer in fluids, chemical reactions, and structural mechanics, as well as mass transport and fluid flow.

By varying the wavelength, power, beam size, or pulse duration of the repair laser, researchers can control and fine-tune the optics-healing interaction, noted Laser Focus World. “Among the techniques being pursued by LLNL scientists,” the magazine said, “are infrared pulsed laser micromachining, laser chemical vapor deposition (L-CVD), and a 3D printing additive process called selective laser melting (SLM). Exploring the effectiveness of these approaches requires extensive simulation in the form of multiphysics modeling of both the properties of the optical material and the laser’s attributes.”