This reaction is a viable candidate for fusion energy, as it is known to have the largest cross-section at center-of-mass energies below 500 keV. Different branches of the reaction include an intense neutron-producing branch and significantly less intense gamma-producing branches, the latter of which are five orders of magnitude less intense than the former.

The D-T gamma-to-neutron branching ratio is of fundamental interest from a nuclear and plasma physics perspective and a more precise measurement can augment theoretical efforts in these fields. The ratio also is relevant for nuclear fusion experiments and related national-security applications.

The results of the work are featured in Physical Review C, with LLNL physicist Justin Jeet serving as lead author. Researchers analyzed data from an inertial confinement fusion (ICF) experiment conducted in 2015, which was not optimized for this measurement.

Experimental configuration of a D-T gamma-to-neutron branching ratio experiment. The inner, front face of a carbon-12 “puck” is 6.27 centimeters (cm) from Target Chamber Center (TCC). The front face of a Gas Cherenkov Detector (GCD-3) is 20 cm from TCC. D-T fusion neutrons (solid, blue arrows) can inelastically scatter in the 12C puck to generate 12C gammas (dot-dashed, green arrows). The D-T fusion gammas (dotted, purple arrows) are mostly unattenuated by the beryllium puck holder and 12C puck. The experimental layout allows the fusion gammas to arrive at the GCD-3 about 1 nanosecond before the arrival of neutron-induced gammas.

“The early stages of the COVID-19 pandemic gave us spare time to revisit this data with the goal of providing a more precise measurement of the D-T gamma-to-neutron branching ratio,” Jeet said. “This work augments previous measurements of the branching ratio in ICF implosions and reduces the uncertainty of the reported value by nearly a factor of three.”

Jeet explained that constraining the ratio’s value is important for experimental efforts at inertial-confinement and magnetic-confinement facilities.

“For tokamak-based nuclear reactors such as ITER (a magnetic-confinement facility now under construction in France), determination of the power gain factor Q, defined as the ratio of produced fusion power to that required to maintain the plasma, is essential,” Jeet said. “Q can be accurately determined by measuring the D-T fusion γ yield along with the precise value of the D-T γ-to-neutron branching ratio. At inertial confinement facilities, the D-T branching ratio can similarly provide absolute yield measurements based on γ-ray diagnostics.”

The ratio is determined in an ICF experiment by utilizing a cross-calibration technique that relies on the inelastic scattering cross-section of neutrons in carbon-12 (12C), a better-known cross-section.

Because an ICF implosion is pulsed, with nuclear production occurring over about 100 picoseconds (trillionths of a second), the DT fusion gamma rays first arrive on a gamma detector, the Gas Cherenkov Detector (GCD). The DT fusion neutrons can interact with a carbon puck upstream of the GCD, generating gamma rays based on inelastic scattering. 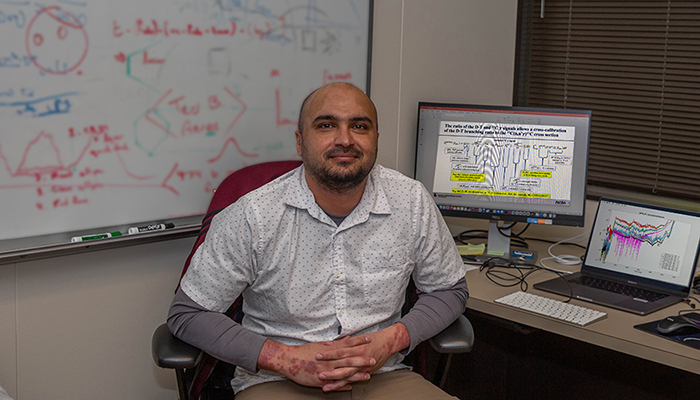 Lead author Justin Jeet, pictured in his office, is one of many authors in the research. Credit: Julie Russell

Due to the transit time of neutrons, the 12C gamma rays produced in the carbon puck arrive at the GCD later in time. The value of this technique is provided by the temporal separation of the gamma signals on the detector. The ratio of these signals, both obtained in a single-shot ICF implosion, is used to determine a D-T branching ratio value of (4.6 ± 0.6) × 10−5.

This measurement obviates the need for absolute detector calibrations, which can have large errors, and instead relies on the inelastic scattering cross-section of neutrons in 12C and the precision in the measurement of the D-T fusion neutron yield. The former is determined from several experiments conducted in the past and the latter is measured to high precision in ICF implosions. This method results in a branching ratio measurement with a significantly reduced total error compared to previous ICF and accelerator-based experiments.

Jeet said further experiments will be conducted this summer at the Omega Laser Facility of the University of Rochester’s Laboratory for Laser Energetics (LLE) in Rochester, New York. These studies are designed to optimize this measurement and will further improve the precision in the D-T gamma-to-neutron branching ratio.

Co-authors of the paper are Alex Zylstra and Michael Rubery from LLNL; Yongho Kim, Kevin Meaney, Aaron McEvoy, and Hans Herrmann from Los Alamos National Laboratory; Chad Forrest and Vladimir Glebov from the Laboratory for Laser Energetics, and Colin Horsfield from the UK’s Atomic Weapons Establishment.