A team of scientists from Lawrence Livermore National Laboratory, Stanford University, and the University of Rochester Laboratory for Laser Energetics (LLE) have improved a method to more accurately model laser-driven plasma flows.

The refined simulations, detailed in an invited paper published Dec. 5 as an “Editor’s Pick” in Physics of Plasmas, provide scientists with an important step toward gaining a more complete understanding of the underlying physics of inertial confinement fusion (ICF) implosions at the National Ignition Facility (NIF) and other facilities. 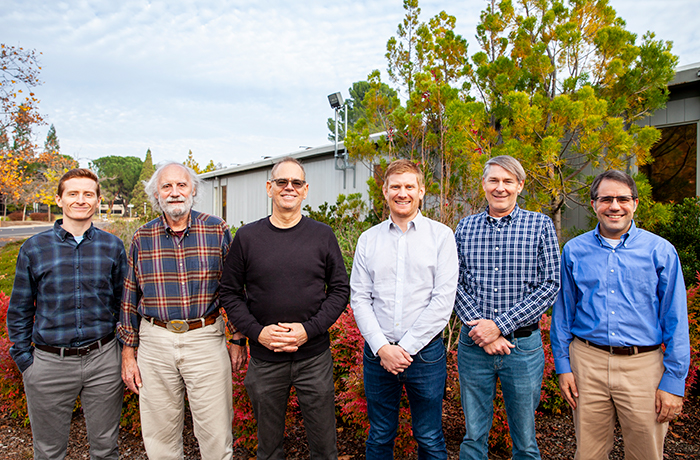 The computational method, which uses the plasma physics simulation software Chicago developed by Voss Scientific, models electrons as computationally efficient fluids while modeling ions either as separate fluids or as individual kinetic particles. This technique addresses shortcomings of conventional models that represent electrons and ions as either all- fluid or all-particle.

“Ours is the middle ground, which is why it’s called a hybrid simulation,” said LLNL plasma physicist Drew Higginson, the paper’s principle author. “This work is the first to apply this method to this particular problem at the full experimental scale. The ability to include more detailed physics at relatively fast computational speed potentially opens up the ability to explore new regimes of hohlraum design.”

At NIF, the world’s largest and most energetic laser, high energy density (HED) science experiments employ laser beams to heat an x-ray “oven” called a hohlraum. The x-rays then compress two forms of hydrogen — deuterium and tritium — partially frozen inside a tiny capsule suspended within the hohlraum.

Over the years, HED science researchers have developed large-scale, single-fluid simulation codes to interpret what happens when high-temperature gases composed of ions and free electrons, known as plasmas, interact. Such codes are effective tools for understanding many HED systems, including hohlraums filled with a relatively high density of gas.

But Higginson explained that there are also scenarios when that isn’t the case, such as with experiments involving low-density plasma.

“With lower density, you don’t have as many particles interacting, so it’s possible for flows to pass through each other, a phenomena known as interpenetration,” he said. “Interpenetration is not allowed in the single-fluid assumption. By using a multi-fluid or kinetic formulation, however, we can capture these physics.” 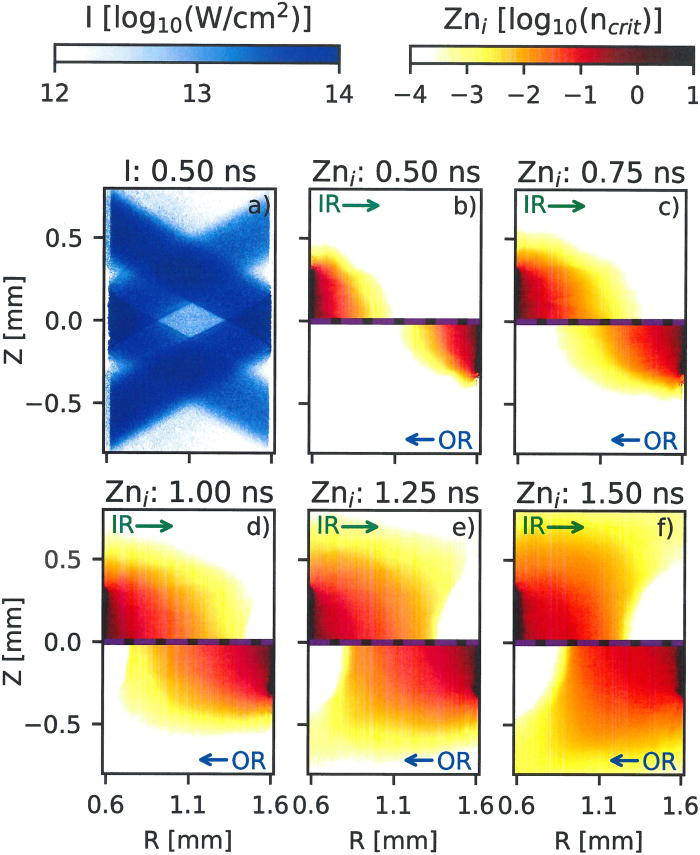 Pseudocolor images of laser intensity (a) and ion density (b-f). The top and bottom sections of figures b through f show the plasma expansion originating from the left and right surfaces, respectively. The lasers cause plasma to ablate away from the initial surfaces, as shown in b. As shown in c and d, the interaction starts as weakly collisional, allowing the flows to interpenetrate. At later times, shown in figures e and f, the flows' interaction becomes more collisional and the plasma furthest from the initial surface is stopped by the flow from the opposing foil. (Click to enlarge)

Flow interpenetration may have occurred on NIF during experiments using a hohlraum filled with a lower density of gas. Single-fluid simulation modeling would predict a flatter pancaked-shaped implosion of the fuel capsule, but in reality, the experiment would produce a more sausage-shaped implosion. ICF researchers seek to produce a symmetrically spherical implosion to achieve their long-sought goal of releasing more energy from fusion than expended by the lasers.

“The ICF program at LLNL did some experiments with near-vacuum hohlraums and they behaved quite differently than the single-fluid codes predicted,” said physicist Peter Amendt, one of the paper’s co-authors. “There was a big gap in understanding what happened. It was like a stone we should be lifting up and looking under to see what could benefit our understanding of hohlraum physics.”

“We aren’t really including any new physics, because the fact that flows interpenetrate has been studied for a long time,” said Higginson. “But putting all the different pieces together shows that these hybrid codes can be used for more than just studying basic science. They actually can be used as a design tool to find potentially new regimes to optimize.

“The modeling and the experiments have to go together,” Higginson added. “If you can’t predict the end result at all, then you’re kind of blind. You need some predictive capability. There aren’t enough shots available on NIF to try a million different settings.”

Three years ago, Higginson and the research team began to investigate using hybrid simulation codes to study hohlraum physics, working under a broadly based Laboratory Directed Research and Development (LDRD) project. About a year into the project, the team found clear effects of the interpenetration of flows and focused on that problem exclusively.

The researchers simulated experiments performed at the University of Rochester’s Omega Laser Facility to validate their method for use on NIF. In the experiments, lasers heated opposing solid targets. This created expanding plasmas that flowed toward each other at more than a million miles per hour. The flows varied in time, with the fastest and lowest-density portions arriving earlier, and slower, higher-density portions arriving later.

This created a dynamic system, where, the researchers said, at early times, the fastest portions of the flows were found to strongly interpenetrate and pass through each other with minimal stopping. Then, later in time, the fastest portions of the flows reached so deep into the opposing flow that the density was high enough to slow them down and cause them to become entrained in the opposing flow.

“Due to the varying density and velocity of the flows over time and space,” said Higginson, “the interaction varied from collisionless to highly collisional. This allowed us to validate our code in both regimes.”

The Omega experiments were specifically designed to attain plasma parameters similar to an indirectly driven NIF hohlraum. The researchers believe the experiments successfully prove the method can capture the collisional physics required for NIF experiments.

Amendt noted that the model is efficient and can be used by other labs without requiring the computational resources of LLNL.

“It’s basically resolving the dynamics of the ion interactions by letting the electrons behave in a fluid response,” he said. “It saves so much time and you could do large problems with the hohlraum over several-nanosecond time scales without using hundreds of thousands of processors.”

Higginson said the next step will be to run the simulations to model full-scale NIF ICF experiments. The LDRD project has concluded and the work will continue as part of NIF’s ICF program.