Many NIF and LLNL team members have contributed to the facility’s construction and the assembly and testing of its many thousands of parts. Support organizations from within NIF & Photon Science and throughout the Laboratory have worked together to install and integrate critical support utilities and systems. And no group has been more instrumental in keeping NIF running at peak efficiency than the Transport & Handling (T&H) Team.

The T&H Team is responsible for the installation, maintenance, and removal of all of the facility’s optical line replaceable units (LRUs). This includes the LRUs in the laser bays, such as the amplifier slabs and the diagnostic towers, as well as the transport mirrors in the switchyards and in the Target Bay. 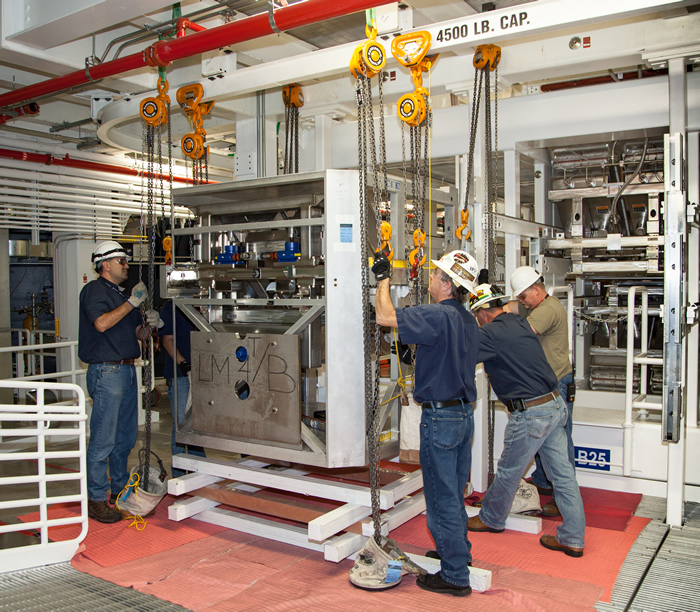 NIF is the world’s largest laser system, and many of its components are correspondingly large and heavy. Removing, transporting and installing these components requires special skills to ensure that the work is done without risk to the workers or the components. Many of NIF’s LRUs are optomechanical assemblies that are roughly the size of a telephone booth; a few, such as the spatial filter tower LRU, are roughly the size and weight of a small car.

Tom Kohut managed the T&H team for about a year and a half. “This team handles the transport of the optical LRUs, new diagnostics, and anything else that needs to be moved,” he said. “If new equipment is coming into the building, they’ll move it from where it’s built to here on site. It’s not just optics, it’s anything large that needs to be rigged or moved.”

To complete its tasks safely, T&H team members are required to undergo general rigger training in addition to specific training for the laser bay optical LRUs. While there is a high potential for damage to equipment or injury if something drops, the team has not had an incident that resulted in an injury since it was established more than a decade ago.

Much planning and preparation goes into all of the team’s activities. “Each LRU or other piece of equipment requires a detailed handling plan that describes how to do the job, and considers and accounts for what could go wrong,” said NIF Facility Manager Doug Larson. “This detailed planning and review process is a key to the team’s outstanding safety record.”

The T&H team currently consists of seven technicians and one work center supervisor, Eric Downing, who leads the team’s technical efforts. They work Wednesday through Saturday, with most of the maintenance work occurring during weekends and quarterly facility maintenance and reconfiguration (FM&R) periods. 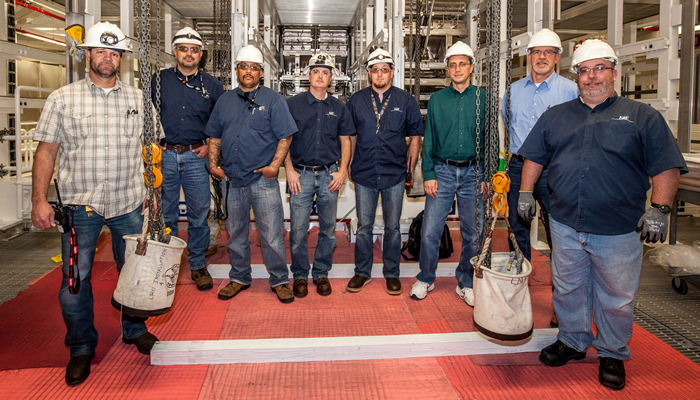 “They have a wide range of things that they work on—some of it’s very complicated, some of it’s straightforward,” Kohut explained. “They build scaffolds for work in (the NIF building) for routine operations, maintenance and upgrades, and new installations. They also do scaffold building in the rest of the directorate for various tasks.”

Kohut said members also assist with other tasks, such as exchanging final optics in the Target Bay and operating a specialized automated transport canister system that installs equipment in the beampath. Members also are trained to maintain that equipment. And team members conduct required maintenance on the facility’s lifting and handling equipment.

Stanley Sommer now manages the T&H team as part of NIF Facility and Infrastructure Systems. The team includes engineers responsible for beamline systems, which are upgraded, repaired, and maintained by the T&H team. He noted that the LRUs are supported inside the beampath on a mechanical support frame. For consistent and proper alignment, LRUs use a feature called “kinematic mounts.” These mounts make it possible to safely and consistently remove and reinstall optical elements that are sitting inside the beampath. 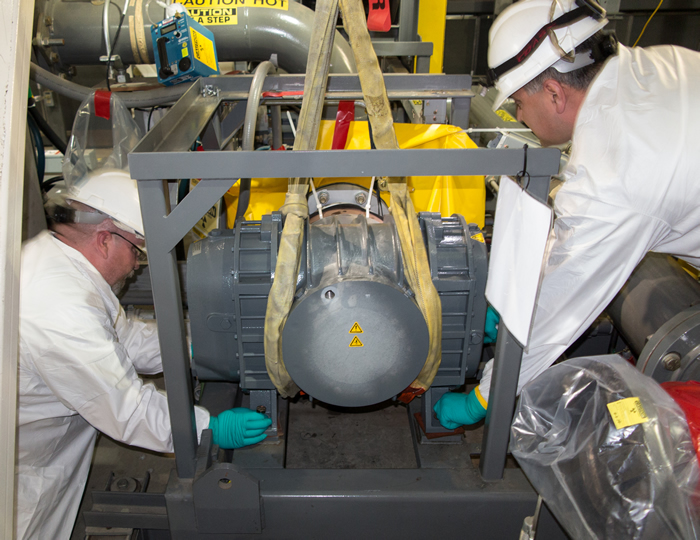 Along with having a track record of zero injuries, Kohut said the T&H team is exceptional in other ways. “They are a very highly motivated team that’s very flexible,” he said. “They come in during off hours if we need them, they work extra time, and they come in on their off days and shift their schedules around or do whatever is needed to support NIF. One of the key things is that they are responsible for support services, like building scaffolding and rigging components for other groups, so they’re integral to a lot of different teams for getting their work done on time.”