The following is an edited excerpt from an article by Arnie Heller in the April 2019 issue of Science & Technology Review. 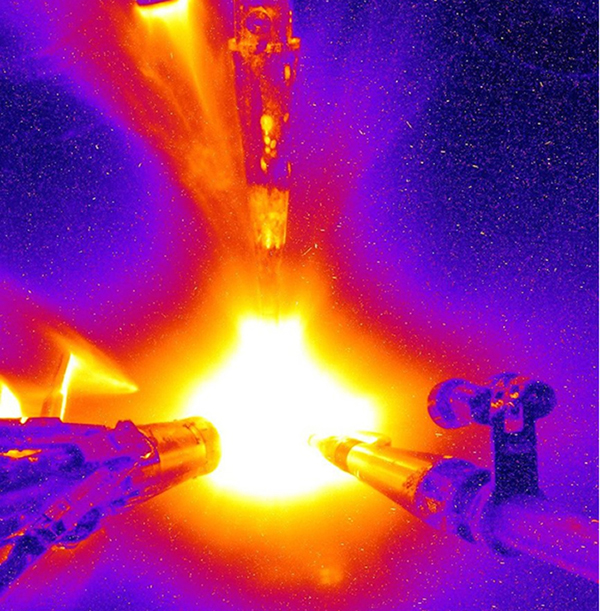 The 192-beam National Ignition Facility (NIF), the world’s largest and most energetic laser, supports the National Nuclear Security Administration’s Stockpile Stewardship Program and is a powerhouse for a broad range of scientific research.

For decades, scientists have pursued inertial confinement fusion (ICF) as a means for achieving ignition—a fusion process by which self-heating generates more fusion heating than is lost to all cooling processes in the target’s fusion fuel. Recent experiments at NIF have shown that the “burning plasma” stage needed to reach this challenging goal may be within reach.

In ICF experiments, a deuterium-tritium (DT) fuel capsule is seated inside a gold or depleted uranium hohlraum, a cylindrically shaped device with open ends. NIF’s laser light striking the hohlraum walls generates a bath of x rays that causes the capsule to implode, heating and compressing the DT fuel into a central hot spot. Fusion reactions within the hotspot produce an alpha particle (helium nucleus) and a neutron.

The number of neutrons generated characterizes the extent of the fusion process. For ignition to occur, enough alpha particles must be present to generate the heat needed to initiate further fusion reactions in the hot spot, creating a thermal runaway effect. 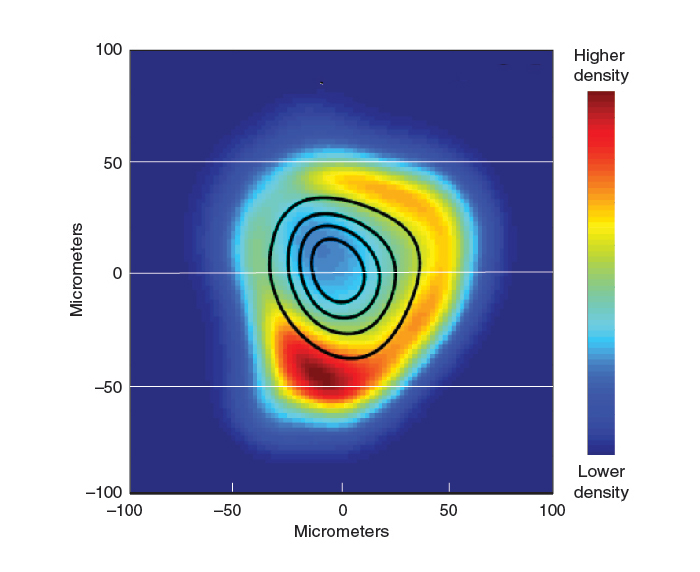 Data analysis of scattered neutrons in the hot spot of an ICF experiment yield images similar to this one. This image shows data from the January 2018 ICF experiment that produced a record 2.0×1016 neutrons and 55 kilojoules of energy. Color gradient indicates the level of neutron scattering.

As part of a successful experimental campaign that took place over several months in 2017 and 2018, scientists at NIF successively produced record numbers of fusion neutrons. One of the experiments, conducted in August 2017, delivered 1.9×1016 neutrons—the highest yield to that point—and generated about 53 kilojoules (kJ) of energy (nearly double the previous performance). A subsequent shot in January 2018 further increased the output, producing 2.0×1016 neutrons and 55 kJ of energy.

The shots used an experimental platform aimed at controlling implosion asymmetries and hydrodynamic instabilities, thereby increasing the transfer of energy from the implosion to the DT fuel. Performance of the fuel capsules has improved to such a degree that scientists may be able to create a reaction in which the alpha energy deposited in the hot spot is the dominant source of heating the implosion—known as the “burning plasma” stage.

“The people in magnetic fusion research have been working towards this achievement for 50 years,” says Omar Hurricane, chief scientist for Livermore’s ICF program. “Our focus has been on systematically identifying limiting factors and then exploring ways to overcome them. We are making important progress.”

For more information, go to "Approaching a burning plasma on the NIF" in Physics of Plasmas.