Optics are slimming down but becoming more functional, thanks to metasurface technology. In this approach to optics design, the surface of a material is carefully altered, creating an ultrathin “metasurface” with properties that differ from those within the bulk of the material.

At the National Ignition Facility, a metasurface design could combine functions that currently require several separate optics into a single, thinner optic. Beyond simplifying the complexity of high-energy lasers such as NIF, reducing the path-length of these intense beams inside the optics glass media could allow greater laser powers. But current methods can’t create metasurfaces with the durability or scalability to survive the world’s largest and most energetic laser.

Until now. A team led by Eyal Feigenbaum has developed a Metasurface Laser Printing (MSLP) process that can produce adjustable, nanoscale (billionth of a meter) surface features with patterning that can be locally controlled and spatially modifiable across meter-sized substrates.

“At Livermore, we are constantly pushing the limits of high-powered lasers,” said Feigenbaum. “This technology is of great importance for the future development of x-ray and particle sources, directed energy, nuclear fusion, and fundamental light-matter interactions. The MSLP process offers the potential for exciting contributions toward these pursuits.” 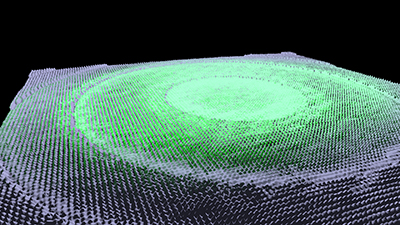 The characteristics of the nanometer (billionths of a meter)-sized features engraved into the surface of a substrate, such as this fused silica, can create a metasurface that has different properties than the underlying material. Controlling these differences enables metasurfaces to be used for high-powered lasers and other applications. (Click to expand)

A simple and scalable process, MSLP fabricates the metasurface into the substrate itself with a final form that contains no additional materials and minimizes creating interface defects. MSLP can produce a monolithic product suited for applications such as million-joule or petawatt (quadrillion-watt)-class lasers, which are vulnerable to light-induced damage and environmental degradation. The process also overcomes the principal challenge of patterning nanoscale features that can be modified at will on a large-optics scale without limiting potential optical materials.

“One of the big limitations facing high-powered lasers is laser damage to the optics,” Feigenbaum said. “We’re looking at technologies to make optics more compatible and durable. Substituting optical coatings or thick, multicomponent optics with a single thin optic are two areas where MSLP could improve the performance of optics used by high-powered lasers.”

The index of refraction, a critical property of materials used in optics, determines the degree to which light will bend when moving between mediums. In the optics currently used on NIF, refraction is controlled by the surface shape of the optic itself, which is altered by polishing.

“Our technology is a substrate engraved with nanofeatures,” Feigenbaum said. “We can change the index of refraction at a given location on the optic by changing the mixture of the nano air-grooves and nanofeatures.” In this method, a traditional optic with a homogenous refractive index and shaped surface is replaced by a thin layer at the surface with a predesigned spatially varying refractive index—a “metaoptic.”

Other approaches to patterning nanofeatures on the surface of an optic use e-beam lithography or deep ultraviolet (UV) lithography. While these technologies can pattern very fine features, they can only do so on very small scales. Creating a meter-scale optic would require the application of numerous registered sections stitched together like a quilt, which is extremely challenging and time-consuming.

MSLP is a four-step process. First, a thin layer of gold, less than 20 nanometers, is deposited on the optic’s surface. Next, a carefully tuned laser transforms the gold film into gold nanoparticles in a process called dewetting. Driven by surface energy minimization, this results in the nano-patterned mask desired for the next step. An ion beam then directionally etches nano-features into the surface of the optic, forming nano-pillar-like surface features. The mask is removed in the final step, leaving a monolithic glass structure. 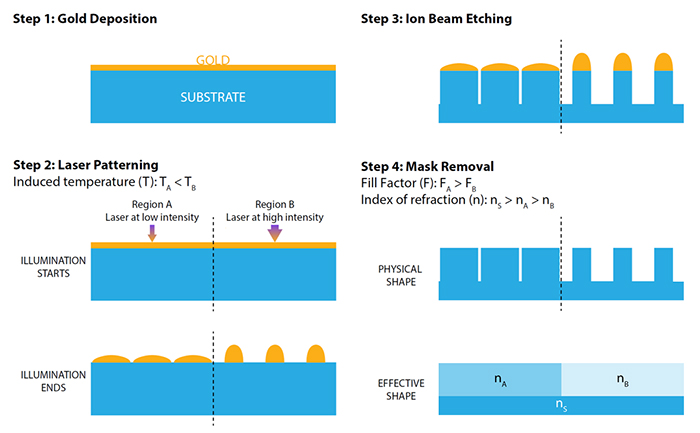 The Metasurface Laser Printing (MSLP) process has four steps: (1) gold deposition, (2) laser patterning, (3) ion-beam etching, and (4) mask removal. The nanofeatures of A and B are varied to yield metasurfaces that each have a different index of refraction.

The novelty of MSLP comes especially in the second step, when the patterned laser-induced energy heating of the film generates a programable and spatially varying masking fill factor across the aperture of the resulting mask, which consists of gold nanoparticles. To put it simply, the laser’s intensity is programmed to vary across the optic’s surface, creating a mask for features of varying sizes that will ultimately alter the index of refraction after etching. MSLP overcomes the scalability limitations of e-beam and deep UV lithography, avoiding the need to write each nano-feature separately with the writing beam. 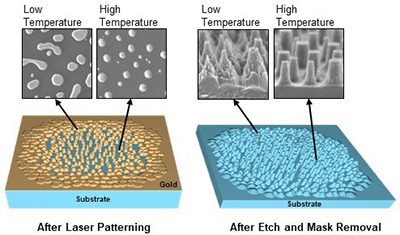 Metasurfaces can be created with localized patterning to generate free-form optics. A circular free-form optic is shown, with nanofeatures that result from a laser beam with a continuously varying intensity profile.

One goal of the LDRD, now in its third year, is to use MSLP to create antireflective (AR) meta-surfaces to replace AR coating. In the case of a high-powered laser, AR coatings are key components used to maximize the amount of laser light passing through the optics while preventing stray light.

AR coatings often are multilayered with different materials to compensate for more than one wavelength. Because of the structure generated by traditional coating processes and the fact that the materials used are dissimilar to the substrate material, AR coatings can be substantial initiation sources of optical damage. An AR metasurface engraved into the optics can reduce these initiation sources as well as enhance the wavelength band of operation.

The other application noted by Feigenbaum is making optics thinner. The thicker the optic, the more material the laser interacts with and the more likely the chance of optical damage such as filamentation, in which angel hair-like fractures run through the optic. The shape and thickness of an ordinary optic are largely governed by fixed optical properties. The variation in thickness typical of an ordinary optic, however, can be translated by using metasurface technology to create a very thin layer that has variation in the index of refraction.

Other laser applications include correcting aberrations and generating free-form optics and specialized gratings. These applications also can improve the laser light throughput for optics and reduce the complexity of optical systems.

“We believe that this process will allow us to pattern a complex multifunction optic into a coating-thick layer,” said Feigenbaum. “It gives the flexibility to pattern a lens with an AR coating but can also produce aberration correction and free-form optics with computer-generated designs.”

After successful preliminary demonstrations of MLSP, the researchers plan to improve the performance of the AR metasurfaces and flexibility of the metaoptics design and their application on other optical substrates; explore scaled-up designs; and further test durability to expand the technology’s potential. They are eager to show how their microscopic surface control can greatly improve the meter-scale optics of very powerful lasers.