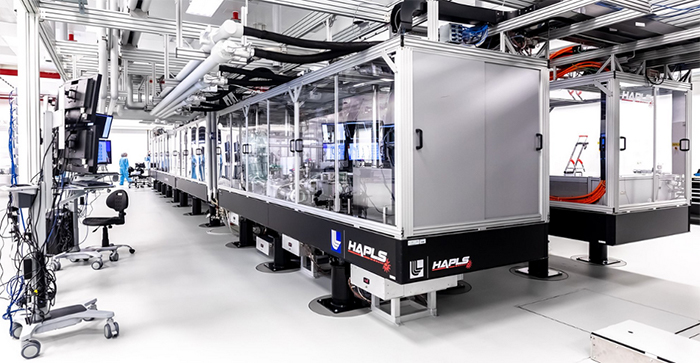 In the Feb. 3 demonstration, the High-Repetition-Rate Advanced Petawatt Laser System operated at the 0.5 petawatt (PW) level and generated compressed pulses with 13.3 joules (J) of energy, with a duration of 27.3 femtoseconds (fs), a 3.3 hertz (Hz) repetition rate, and 44 watts of average power.

“(This demonstration) is a great accomplishment for ELI-Beamlines, and is very exciting for both ELI and LLNL,” said Tom Spinka, NIF & Photon Science program element leader for Laser Development in the Advanced Photon Technologies (APT) group.

“Having passed this milestone, ELI-BL is now preparing to begin conducting science experiments in their dedicated target areas,” he said. “It is gratifying to see the LLNL-built laser system being put to good use, and to see and participate in the new science that is enabled by the combination of about 0.5 PW peak power, 3⅓ Hz repetition rate, and ELI’s new target and experimental capabilities.”

Spinka added that “LLNL is looking forward to working with ELI-BL to ramp the performance of the L3-HAPLS laser even further to produce about 1 PW peak power at a 10 Hz repetition rate.”

“The L-3 HAPLS laser team worked hard during the last year to overcome several operational challenges and to get ready for commissioning experimental campaigns planned for the second half of this year,” said Josef Cupal, the leader for L3-HAPLS. “Finishing these campaigns successfully will be a key step towards opening the high-power experimental stations to the user community.”

Ramping the full system’s energy through the compressor to the 0.5 PW level was done gradually in about 30 steps. After the demonstration run, a thorough visual inspection of the diffraction gratings and other optical components inside the compressor found no problems. The L3-HAPLS system is now ready to send its short-pulse high-power beam to the ELI-Beamlines experimental halls.

HAPLS is capable of energetic femtosecond (quadrillionth of a second) laser pulses reaching a peak power exceeding one petawatt at a repetition rate of 10 times per second. The laser is able to deliver unprecedented intensities on target—up to 1023 watts per square centimeter.

L3-HAPLS will have a wide range of uses supporting basic and applied research. The system will generate secondary sources such as electromagnetic radiation or accelerate charged particles, enabling unparalleled access to research areas, including time-resolved proton and x-ray radiography, laboratory astrophysics, and other science and medical applications such as for cancer treatments.