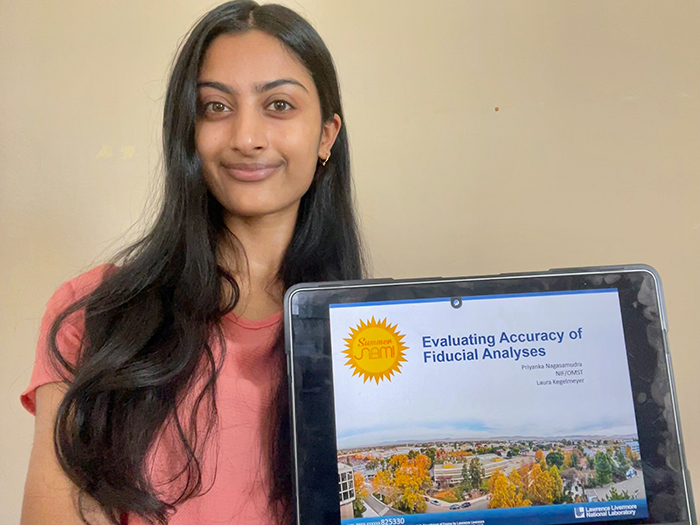 Priyanka Nagasamudra, a Dublin High School graduate and University of California San Diego data science major, was an intern in this year’s NIF&PS Summer Scholar Program. Nagasamudra’s project focused on the reference points, or fiducials, along the borders of optics. The fiducials map a physical location on the optic to enable placement in a coordinate system. Credit: Priyanka Nagasamudra

When LLNL scientist Laura Kegelmeyer gave a Lab-sponsored talk about the National Ignition Facility to a Dublin High School class in the fall of 2018, she clearly made an impression on at least one of the students.

“In high school, Laura gave a talk in my engineering class about NIF, which I found fascinating,” said Nagasamudra, an undergraduate data science major at the University of California San Diego. “I emailed Laura after the talk about her presentation and her background in image processing. I wanted to intern at LLNL since then!”

Kegelmeyer recalled meeting Nagasamudra. “Once we spoke by phone, I was impressed with Priyanka’s enthusiasm, curiosity, and interest in many of our projects,” she said.

Nagasamudra, who was also a NIF&PS Summer Scholar last year, “had a positive experience” with this year’s program. She pointed out program features such as the virtual coffee sessions, where students had a chance to chat with a Lab expert, and the student “poster slam” presentation that allowed her to see the work of other interns.

“I really enjoyed the NIF&PS Scholar Seminar series, which went over different projects in NIF&PS and really put my project in perspective,” she added.

Nagasamudra’s project this summer was, “Evaluating Accuracy of Fiducial Analyses,” and dealt with the reference points along the borders of optics called fiducials. The fiducials map a physical location on the optic to enable placement in a coordinate system. 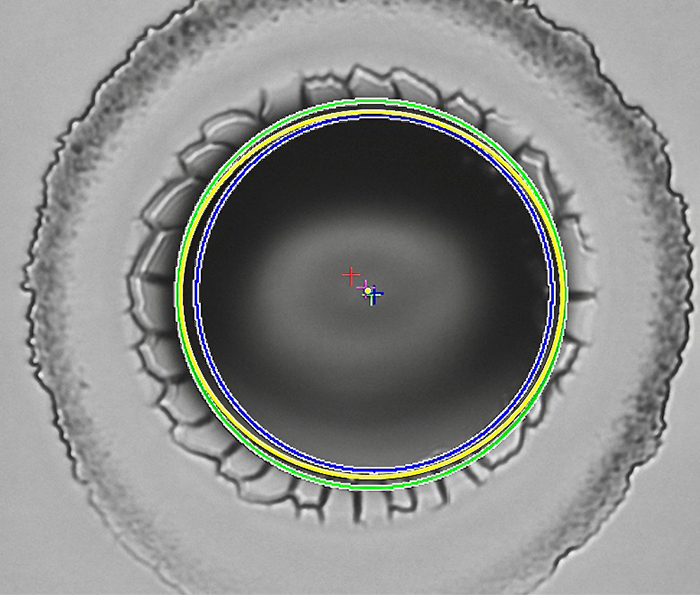 Initial investigations for the NIF&PS project showed the excess material surrounding the denser, dark region of the fiducial needed to be de-emphasized by morphological erosions and Gaussian smoothing. The smoothing also served to round out the dark region as much as possible before attempting to define its center. Then the results from three algorithms (blue, green, red crosshairs) and their average (purple crosshair), along with a human ”eyeballed” estimate for comparison (yellow), demonstrated that the purple crosshair defined a center that can be reliably found regardless of the microscope and camera system used. Credit: Priyanka Nagasamudra

The project was to find the center of these fiducials, so that two different microscope systems would find the same center to act as the coordinate system. Algorithms were used to define the center, which are not round and have excess material surrounding them.

Initial results showed that the excess material had to be excluded. A current solution to the problem was developed, involving eroding, filtering, and then finding circles to fit each fiducial before determining the center of the circles.

“My mentor, Laura Kegelmeyer, and my other team members were wonderful,” Nagasamudra said. “They took a lot of time to help answer any questions I had about my project and the Lab. My mentor has had a lot of experience in image processing and talking to her has allowed me to learn a lot about that field. She talked me through a lot of key concepts, and not having experience with the field, walking through these concepts with her has been extremely exciting. I could not have asked for a better mentor or team.”

Kegelmeyer, who cited Nagasamudra’s “enthusiasm and eagerness to learn,” said her student is now in the final weeks of her internship and is figuring out how the team might use a newly available image analysis tool.

“I think she’s learned a tremendous amount this summer, but we, too, have learned many new things from her and really appreciate the opportunity,” Kegelmeyer said.

Nagasamudra’s project in the summer of 2020, also with Kegelmeyer as her mentor, was to create a proof-of-principle demonstration to convert complex, time-consuming algorithms into a different, more sustainable language.

She said she first got interested in web development, which evolved into a passion for computer science, math, and computer architecture.

“In high school, I found learning different data structures and algorithms (including some machine learning algorithms) something I would want to pursue and that led me to applying to colleges as a data science major,” she said. “Now, with this internship, I have also found an interest in image processing.”

Nagasamudra hopes to continue her education and attend graduate school.

Growing up in Dublin, Nagasamudra first heard about LLNL from neighbors who work at the Lab, and they were instrumental in connecting her with Kegelmeyer.

Nagasamudra said that working virtually has had advantages in providing flexibility. It has allowed her to work over the school year at LLNL and balance school and work. There have also been drawbacks because of the pandemic; she hasn’t been able to work at the Lab and see NIF.

“I would have loved to have been on site to see the laser and meet more people who work at NIF and the other interns,” she said.