The following is an excerpt from the cover story by Arnie Heller in the September 2019 issue of Science & Technology Review. 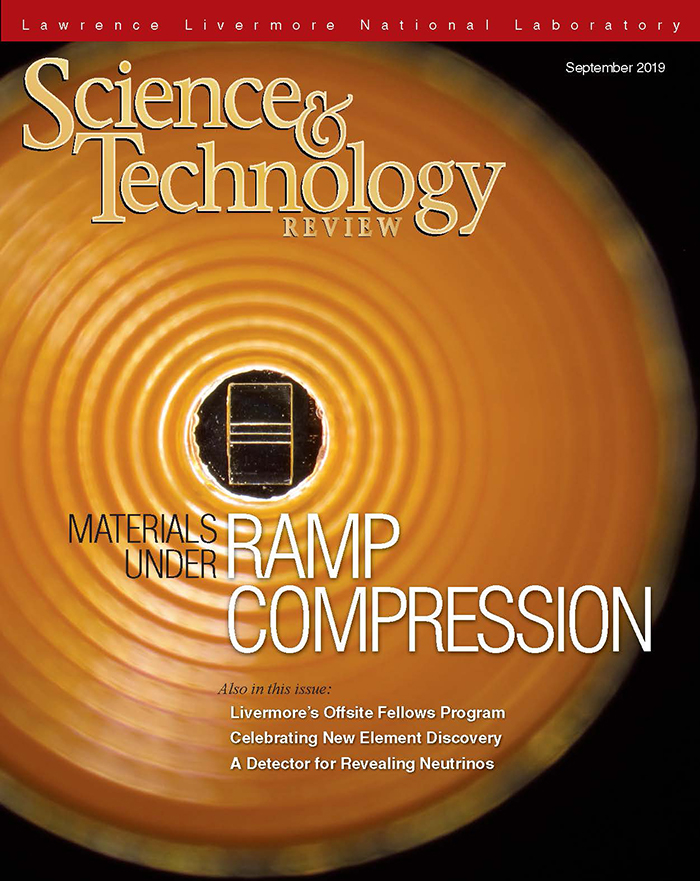 For the past decade, a team of scientists has been using NIF, the world’s largest and most energetic laser, to determine equation-of-state (EOS) data for solid materials at pressures never before achieved, up to 5 terapascals (TPa), or 50 million times Earth’s ambient air pressure.

From the instantaneous detonation of a nuclear weapon or high explosive to the evolution of a planet’s core over millions of years, a material’s EOS is required to fully understand the relationship between its pressure, temperature, and density.

Approximately 400 experiments are conducted at NIF annually, many of which support NNSA’s Stockpile Stewardship Program, including inertial confinement fusion (ICF) experiments. For a few billionths of a second during an ICF experiment, NIF’s 192 lasers duplicate the same temperatures, densities, and pressures found within the interiors of stars and planets and detonating nuclear explosives. 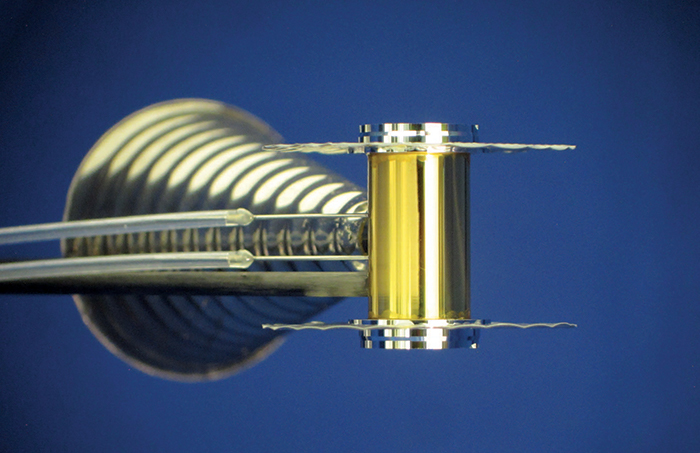 The setup for a ramp compression experiment at NIF shows a cone-shaped device attached to the outside of the hohlraum wall. The device blocks stray laser light that can interfere with diagnostic measurements.

About 15 experiments per year are aimed at researching materials’ equations of state. In addition, about four shots a year are devoted to Discovery Science EOS experiments that help reveal the likely composition of stars and planets.

For decades, the traditional method for determining a material’s EOS was to send a sudden shock through a material and measure its response. This shock compression method relies on lasers, gas guns, and other tools to launch a virtually instantaneous shock wave through a sample, rapidly melting it.

However, shock compression limits the combination of pressures, temperatures, and densities that may be reached to a narrow portion of the material’s EOS. To reach a broader set of conditions, an alternative route—ramp compression—is proving immensely useful.

Ramp compression experiments on NIF apply a carefully tailored laser pulse shape that more “softly” compresses a material without forming a shock. Jon Eggert, group leader for Dynamic Materials Properties, explains, “NIF allows us to control the energy of the beams as a function of time so we can compress the sample more slowly. NIF is fantastic for ramp compression.”

The technique is helping scientists better understand the physics of solids compressed to extreme densities under a wider range of pressures and much lower temperatures.

To read the full story, which includes a related story, “Discovery Science Looks at Exoplanets,” go to Science & Technology Review.