Perry, a veteran of the underground nuclear testing era, now focuses on ensuring the reliability and safety of the nation’s nuclear stockpile through the National Nuclear Security Administration’s Stockpile Stewardship Program. After his retirement from Livermore Lab in 2012, he went to work at Los Alamos National Laboratory (LANL) where he organized the multi-laboratory effort for the current experimental campaign on radiative opacity—the study of how opaque a hot, dense material is to the transport of photons. 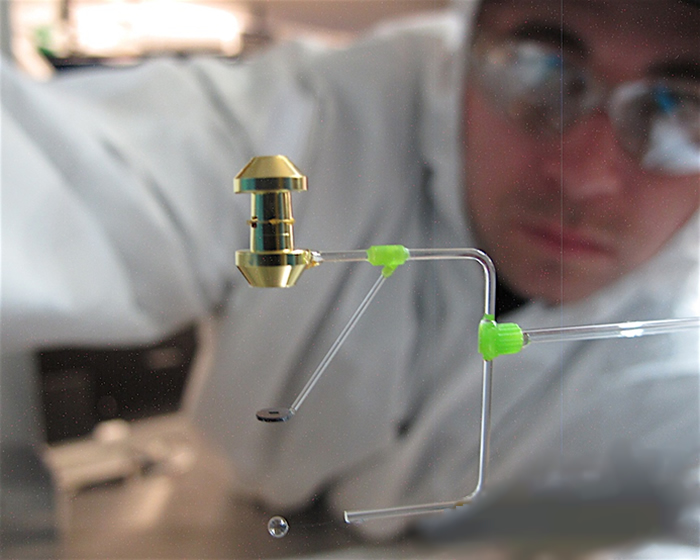 A cryogenic systems operator installs an opacity target assembly in the NIF target positioner. The “Apollo” drive hohlraum (top) holds and heats the opacity sample. The x-ray collimator pinhole is in the middle and the x-ray backlighter source is on the bottom. The tiny capsule becomes a bright broadband x-ray emitter when hit by the NIF lasers.

Researchers from LLNL, LANL, Sandia National Laboratories, the Laboratory for Laser Energetics (LLE) at the University of Rochester, and the Nevada National Security Site (NNSS) participated in the August experiments. Supporting RIs were Heather Johns of Los Alamos and Kathy Opachich of NNSS.

Their goal was to measure the x-ray opacity of a sample inside a hohlraum target at a specific temperature and density. They used a broadband x-ray source to shine photons through an iron-and-magnesium sample heated to around 1.8 million kelvin and recorded the transmitted photons using a spectrally resolved diagnostic called the opacity spectrometer, or OpSpec.

A team of NNSS and Livermore scientists, engineers, and mechanical designers developed the OpSpec to help validate the opacity data used to maintain the nation’s nuclear weapons stockpile. For the August campaign, the team developed a modification to the OpSec device—a “snout extension” resembling an anteater’s snout—whose purpose is to improve filter and data survivability on the x-ray camera that captures the images of the transmitted x-ray spectra passing through the hohlraum-heated sample. To record the desired low-energy x rays, the data is protected from the extreme conditions in the NIF Target Chamber by just five or six layers of filter material, each of which is less than a micron thick.

It was clear from the preliminary data that the snout modifications added to data clarity, Heeter said. “We now clearly see the iron absorption as well as the magnesium in the opacity sample.”

While tentatively declaring the experiment a success, Heeter noted the data remains preliminary, but he said the results enabled researchers to obtain the first opacity measurements from NIF experiments. The team’s next steps are to analyze the data, make further measurements of iron to validate and improve the experimental platform, study a more complex material at the same conditions, and then extend the platform to even more extreme conditions. Heeter paraphrased Winston Churchill’s World War II inspirational quote, calling the campaign “the end of the beginning” for Stockpile Stewardship opacity on NIF.

The Importance of Opacity

Materials vary in the degree to which they absorb and re-emit radiation of given wavelengths under given conditions, directly affecting the passage of radiation through them. The material’s opacity is defined as the measure of how easily it transmits radiation. Because x rays transport much of the energy in a nuclear weapon, weapons physics is concerned particularly with opacities at x-ray wavelengths.

In high-temperature plasmas created by nuclear detonation, atoms become highly ionized and the number of possible atomic transitions grows very large. The complicated interaction of radiation with these complex ions makes opacity hard to calculate and forces scientists to rely on approximations. To test such approximations, researchers have conducted experiments on many different materials at various temperatures and densities using various HED facilities.

“It takes a complex design to get to the one specific thing you want to measure,” Perry explained. “NIF is unique in its ability to make the hot plasma in the right conditions and in its ability to vary these conditions.” Performing opacity experiments is one piece of the puzzle of finding where weapons design codes need to be improved, he said.

“It’s good news for the entire plasma physics community if we could make our simulation codes much more predictive,” Perry said. “If the codes had all the physics in them that was important, we would be able to predict the outcomes of all these experiments in advance. This is important not only for stockpile stewardship but also for ICF (inertial confinement fusion) and astrophysics.” 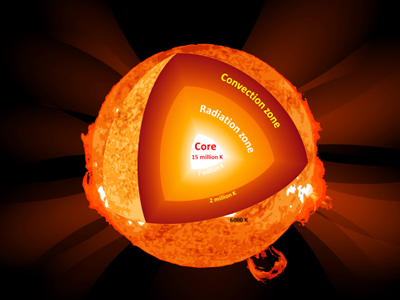 Illustration of the inner structure of the Sun. The energy released by nuclear fusion of hydrogen to helium in the Sun’s core is transported outward via radiation. The radiation flow from the core to the surface is so complex it takes almost a million years to get there. Credit: Kelvinsong, Wikimedia Commons

A Surprise for NIF’s Night Owls

For the NIF team working the Owl Shift between 6 p.m. and 7 a.m. on Aug. 22-23, the news that they were about to fire the 2,000th shot came as a surprise. Many of the 14 technicians and engineers on duty that night could be seen mentally calculating how many of those shots they had personally handled.

NIF technician Chris Postrero, who has spent the last six years loading targets in the Target Chamber, said, “I personally put a lot of those 2,000 on for sure—maybe hundreds. I treat them all carefully; it’s my job.”

Postrero installed the 2000th target with the same painstaking care. After putting on a fresh white contamination protection suit, taping the edges shut on his wrists, and double-gloving up, he pulled back the target positioner (TarPos) as field engineer Derek Brangham, at the target system computer console, ran down the checklist for loading targets. Postrero extracted the fresh target designed by Perry and his team from its case and mounted it in the positioner, step by step. The process for shot No. 2,000 ran smoothly—clean, no snags.

Back in the NIF Control Room, while technicians quietly prepared the laser and diagnostics, on-duty Shot Director Minh Hoang acknowledged some special buzz for the 2000th shot.

“Every milestone has some excitement to add,” he said, noting the quiet intensity of the Control Room. “They’re the team that’s been doing this a long time, and every shot is a careful, exacting exercise. This one is no different—the scientists get real excited about the data, while the techs do their job, the operators do their job.”

Perry and Heeter were so excited about the data and the experiment, in fact, that Heeter, unable to sleep, came in hours early for his shift. The RIs brought in a table full of treats for the staff in addition to the usual box of Owl Shift cookies that laser techs like to call an “offering to the laser gods.” The appreciative NIF team stopped by throughout the 13-hour shift to enjoy the snacks.

So well did the data turn out in the experiment, Heeter said, that he believes it could advance agreement in the physics community about pursuing opacity measurements on NIF.