NIF Experiments Study How ‘Starstuff’ Is Made

When the renowned cosmologist Carl Sagan declared that “we are made of starstuff,” he wasn’t speaking metaphorically. As Sagan said in the TV series “Cosmos,” many of the elements in our bodies—“the nitrogen in our DNA, the calcium in our teeth, the iron in our blood”—were forged in the interiors of stars, in a process called stellar nucleosynthesis (element formation). Lighter elements, such as hydrogen and helium, were created in the Big Bang when the universe began.

How these elements are assembled, or synthesized, is the subject of a new series of NIF Discovery Science experiments which began on May 30. By fusing elements such as tritium (a form of hydrogen) and helium in the NIF Target Chamber, a multi-institutional team of researchers hopes to gain new insights into the processes that kick-started and have sustained the universe. 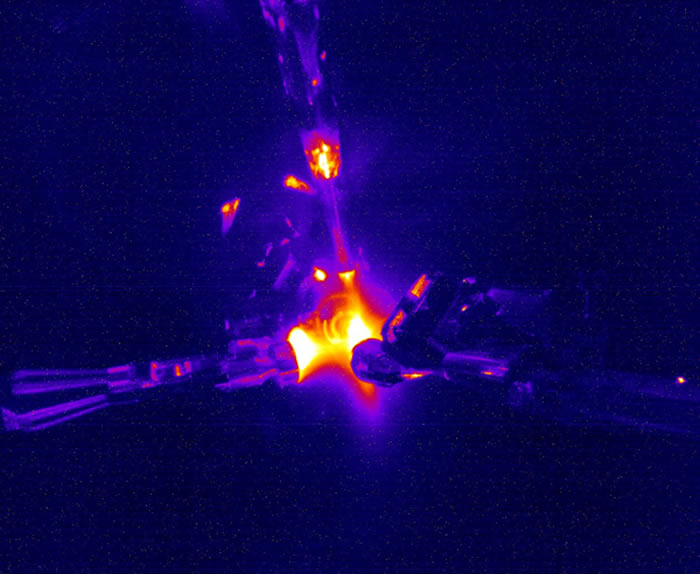 “All of the stellar nucleosynthesis reactions—fusion reactions that happen inside stars—produce the elements, but we can’t really see inside a star to tell how those reactions are proceeding,“ said plasma physicist Alex Zylstra of Los Alamos National Laboratory (LANL). “Models of the production of nuclei in the cosmos depend on having accurate data to inform those models. And studying those reactions in conditions that are actually applicable to the interior of stars or to the universe during the Big Bang is very challenging. This experimental campaign is working toward doing that at relevant conditions” that can only be achieved at NIF.

“And (the experiments) answer questions about stellar evolution and elemental abundance—it’s really fundamental science,” added nuclear physicist Maria Gatu Johnson of the Plasma Science and Fusion Center at the Massachusetts Institute of Technology (MIT), the campaign’s principal investigator. “The conditions we create in one of these implosions are very similar in density and very similar in temperature to the interior of a star.”

The first three experiments in the campaign focused on the “proton-proton 1” chain of nuclear reactions, at the beginning of the stellar nucleosynthesis cycle. In the core of the sun and other stars, nuclear fusion converts hydrogen into helium, and a small amount of matter is turned into energy in the process.

“It starts with just the protons in the nucleus of regular hydrogen atoms,” Gatu Johnson said. “They fuse to form deuterium (as one of the protons is converted to a neutron), and then deuterium can fuse with a proton to form helium-3. The helium-3 particles once produced fuse to form helium-4 (also known as an alpha particle), and generate two protons which will go through the cycle again.

“This is the most significant energy-producing step in the sun—3He+3He reactions actually produce almost half the energy in the proton-proton 1 chain—so it’s very critical to know the rate of that reaction.”

In the sun, four hydrogen nuclei (protons) fuse into one helium-4 nucleus by way of the proton-proton chain, shown in the figure on the left as a three-step process and summarized on the right as the initial and final states. Gamma rays and subatomic particles called neutrinos and positrons carry off the energy released in the reaction. The sun converts 600 million tons of hydrogen into helium every second. Credit: New Mexico State University

“In accelerator experiments you have a solid, cold target that’s hit by a beam of ions (charged particles),” Zylstra said, “and that’s a totally different scenario from what happens in a star or in the universe during the Big Bang. Those are plasma systems; those reactions happen in a plasma in the universe.”

“And we actually manage to create this kind of environment in the plasma that’s created on NIF and OMEGA,” said Gatu Johnson. “So it’s really much more similar to the stellar conditions compared to other methods.” 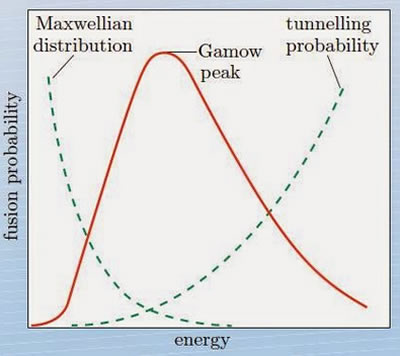 The rate of nuclear fusion depends on the probability that nuclei will penetrate, or “tunnel” through, the Coulomb barrier that resists the fusion of particles with the same charge. The penetration probability is described by its Gamow energy (EG). A higher EG reduces the probability that the barrier will be penetrated. Higher energy particles tunnel through the barrier more readily, but there are fewer of them. There are many more lower energy particles in the Maxwellian (thermal) distribution, but they cannot penetrate the barrier so readily. The energy at which the fusion rate is at maximum is called the Gamow peak. The region over which the fusion probability is significant is called the Gamow window. Credit: Sean G. Ryan and Andrew J. Norton, Stellar Evolution and Nucleosynthesis.

Compared to OMEGA, NIF’s higher laser power and energy and larger HED plasmas allow quantitative studies of the reactions at lower “Gamow-peak” energy—conditions more directly relevant to stellar nucleosynthesis that can only be reached at NIF.

The Gamow peak, named for Russian-American physicist George Gamow, is the energy region—not too high and not too low—where the reaction is most likely to take place. “At OMEGA,” Zylstra said, “you can have a very small volume of plasma that’s hot, and you can see the (reaction) products. Using NIF we can generate a larger volume of plasma at lower temperature, producing a comparable number of reaction products, to get closer to stellar conditions.”

Along with the 3He+3He reaction, the first set of experiments also studied the complementary tritium-tritium and tritium-helium-3 reactions. The shots used a target called a polar direct-drive exploding pusher target; in exploding pusher shots, the NIF beams heat thin, glass-walled targets, driving strong shocks into the target and fusing the material inside.

Gatu Johnson said the first experiment, which studied the tritium-tritium reaction, produced enough neutrons for the T-T neutron spectrum to be measured by NIF’s neutron diagnostics. “We got some really good data from that,” she said. Data from the T+3He and 3He+3He experiments weren’t immediately available.

Two more rounds of experiments are scheduled in the campaign. “The primary goal of this set of shots is to get a really good measurement of the 3He+3He proton spectrum and rate,” Gatu Johnson said. “Depending on what we learn from this first round of shots, we’ll fine-tune the implosions to get better data. The resulting data from this effort should greatly improve our knowledge of these reactions in HED plasmas.”

“This set of shots to study reactions relevant to stellar nucleosynthesis is an important step forward for the Discovery Science (DS) Program,” said Bruce Remington, the NIF DS Program Leader. “We have now broadened the science regimes accessible to NIF to include stellar nuclear physics.” 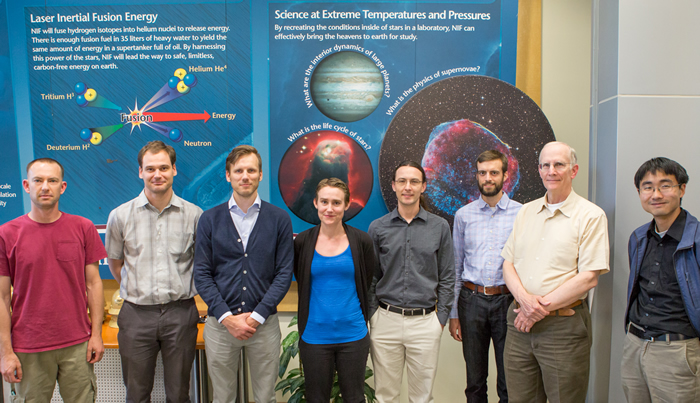