NIF’s contributions to the National Nuclear Security Administration (NNSA)’s science-based Stockpile Stewardship Program (SSP) received praise from Secretary of Energy Ernest Moniz and other U.S. officials during the Oct. 21 celebration of “20 years of Success” for the SSP.

The half-day event in Washington, DC, commemorated the anniversary of President Bill Clinton’s 1995 announcement that the United States would pursue ratification and entry-into-force of the Comprehensive Nuclear Test Ban Treaty and maintain the nation’s nuclear arsenal without underground nuclear tests.

Leading policy officials, thought leaders and the directors of the three national nuclear laboratories—LLNL, Los Alamos, and Sandia—participated in featured panel discussions on the policy conditions and scientific breakthroughs that have shaped the SSP as one of the greatest scientific achievements of our age, allowing the United States to maintain a safe, secure and effective nuclear weapons stockpile without explosive nuclear testing.

“The SSP program has succeeded beyond the expectations of even the founders,” said NIF Director Mark Herrmann, who attended the ceremonies.

NIF was mentioned several times as a key component of the Stewardship program. Secretary Moniz noted that NIF is both enabling the key science needed for Stockpile Stewardship and “opening up whole new frontiers of high energy density science, 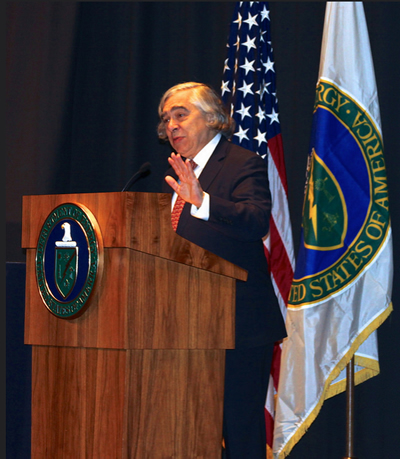 The secretary’s comments about NIF can be heard at the 22:10 mark of the YouTube video of his remarks. NIF images and an interview with Omar Hurricane, chief scientist of LLNL’s Inertial Confinement Fusion Program, are featured in NNSA’s “Stockpile Stewardship’s 20th Anniversary” video.

“This event honors a triumph of innovation and invention,” said DOE Under Secretary for Nuclear Security and NNSA Administrator Lt. Gen. (retired) Frank G. Klotz. “It also pays tribute to the remarkable accomplishments of the literally thousands of scientists, technicians, and engineers working within the nuclear security enterprise who turned a vision into a reality.”

Herrmann sent congratulations to the NIF Team “for developing, operating and utilizing such an amazing capability. Everyone can be very proud of the key role they have played in enabling the success of the SSP through their work on NIF to date, and can be sure that their efforts on NIF will play an even bigger role in maintaining the deterrent over the next 20 years,” he said.