Going from RAGS to Riches

The story of NIF’s Radiochemical Analysis of Gaseous Samples (RAGS) is a true trash-to-treasure tale, turning debris from the NIF Target Chamber into valuable data that helps shape future experiments.

The RAGS diagnostic, developed for NIF by Sandia National Laboratories and commissioned in 2012, is a cryogenic system designed to collect the gaseous debris from the NIF target chamber after a laser shot, then concentrate, purify and analyze the debris for radioactive gas products.

Radiation detectors on the apparatus produce rapid, real-time measurements of the radioactivity content of the gas. Based on the results of the radiation counting, the total number of radioactive atoms that were produced via nuclear reactions during a NIF shot can be determined. 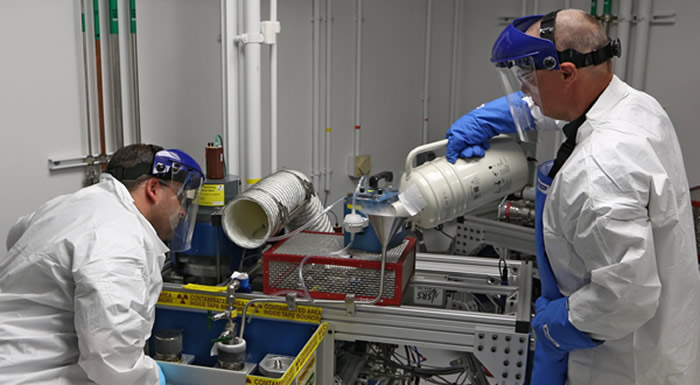 Estes Vincent (right) fills a dewar with liquid nitrogen to freeze a RAGS gas sample while Greg Pyles verifies the correct level. A dewar is a double-walled flask of metal or silvered glass with a vacuum between the walls, used to hold liquids and gases at well below ambient temperature.

If the number of target atoms in the fuel capsule and/or the hohlraum was known prior to the shot, the results from RAGS determine the number of reactions that occurred, which in turn is used to determine the flux of particles that was produced by the capsule as it underwent fusion. This information is used to validate models of NIF capsule performance under certain shot conditions.

If specific materials are added to the capsule or hohlraum prior to the shot, reactions related to a particular experiment can be measured. For instance, gas-based experiments have been designed to measure areal density (a measure of the combined thickness and density of the imploding frozen fuel shell) and mix (a potentially undesirable condition during which spikes of the plastic rocket shell (the ablator) penetrate to the core of the hot fuel and cool it, decreasing the probability of igniting a sustained fusion reaction with energy gain).

“Radiochemical diagnostics probe reactions that occur within the capsule or hohlraum material,” said radiochemist Dawn Shaughnessy, the RAGS principal investigator. “By adding materials into the capsule ablator and subsequently measuring the resulting products, we can explore certain capsule parameters such as fuel-ablator mix. There are plans to add isotopes of xenon gas into capsules specifically for this purpose—to quantify the amount of mix that occurs during a NIF implosion.”

RAGS can be used to perform basic nuclear science experiments. Recently, the diagnostic has been employed during shots where the hohlraum contained small amounts of depleted uranium. Gaseous fission fragments were collected by RAGS, including very short-lived species with half-lives on the order of a few seconds. Based on these observations, there are plans to use RAGS in the future to measure independent fission product yields of gaseous species, which is difficult to do at traditional neutron sources.

“This opens up the possibility of also using RAGS for Discovery Science experiments, such as measuring reaction rates of species relevant to nuclear astrophysics, and measuring independent fission yields,” Shaughnessy said. 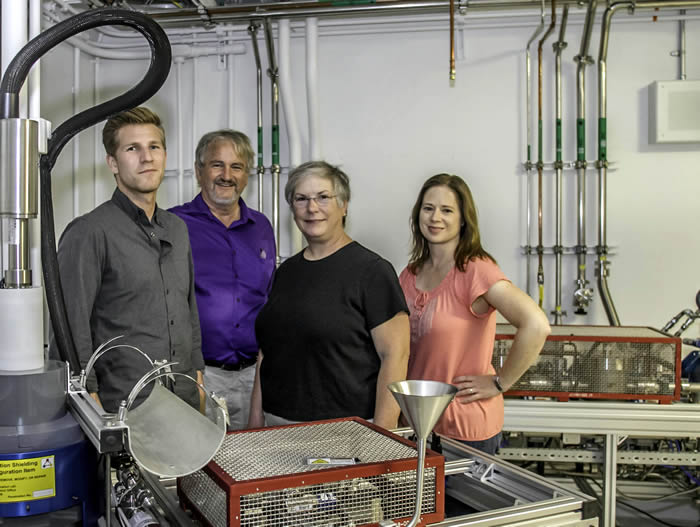