NIF Lasers Continue to Fire at a Record Rate

When the first half of Fiscal Year 2015 ended on March 31, NIF was on track to meet its “stretch goal” of 300 target shots for the year, compared to 191 target shots in FY 2014. The record pace reflects a nearly 50 percent reduction in the average time between NIF shots in the past six months, resulting in an average of 7.9 target shots per five-day week in the second quarter of FY 2015.

NIF’s stepped-up shot rate, which included 30-shot months in January, February, and March, is made possible by a variety of efficiency and scheduling improvements recommended by a “120-day Study” tasked by the U. S. Congress with finding ways to enhance NIF’s shot availability over three years at a constant annual funding level.

“These shots translate into more opportunities to support the missions on NIF,” said NIF & Photon Science Principal Associate Director (PAD) Jeff Wisoff. “The incredible increase in the productivity of NIF is a testament to all the hard work by the NIF team to adopt the recommendations of the 120-day Study.

“By increasing the shot rate and investing in a new set of transformative diagnostics being planned through the National Diagnostics Working Group,” Wisoff said, “we and our partners are committed to providing the Stockpile Stewardship Program the best tools in the world to continue U.S. leadership in HED (high energy density) science. Congratulations to all and keep up the great work.” 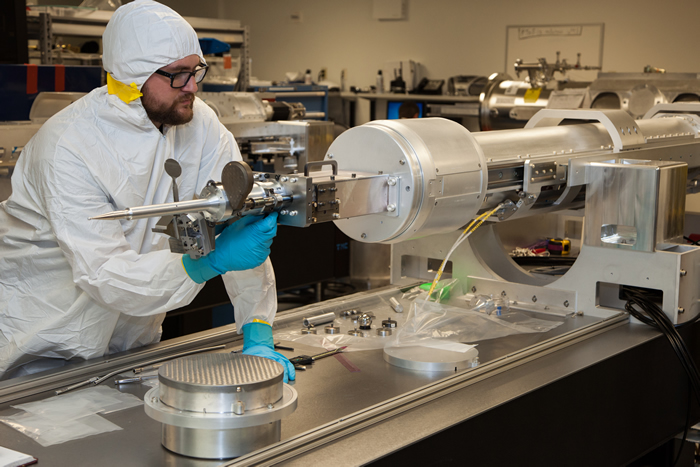 As part of the drive for greater efficiency, the NIF Team has developed a hybrid diagnostic load package (DLP) assembly that can be used in two popular NIF diagnostics—the Velocity Interferometer System for Any Reflector (VISAR) and the Neutron Imaging System (NIS). (Above) Mechanical technician Alex Lumbard performs the alignment verification of the VISAR-NIS DLP with the NIS package in the Operations Support Building’s diagnostics factory. At bottom left on the table is the recently removed VISAR package. (Below) The V-NIS development team (from left): Lumbard, system manager Ken Skulina, optics engineer Don Jedlovec, alignment/mechanical engineer Kim Christianson, and electrical engineer Ken Piston. The “fast-swap” conversion will take about one to two hours, versus the two shifts required to swap the current individual DLP platforms, for a saving of about three hours each time the team transitions between the two diagnostic configurations. Credit: James Pryatel 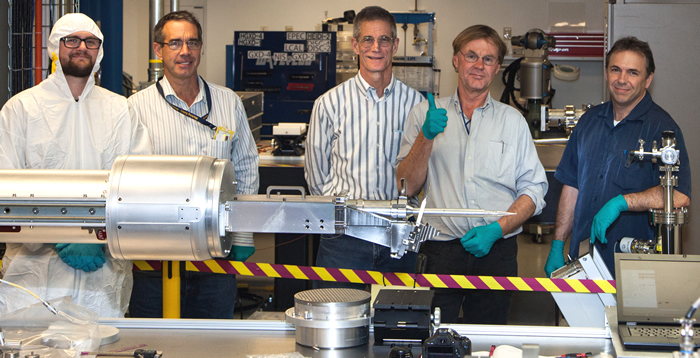 The 120-day Study was completed last April by a team of more than 80 NIF collaborators and sponsors led by NIF&PS Principal Deputy PAD Jeff Atherton and NIF Facility Manager Doug Larson. Larson said more than half of the study’s organizational, engineering, scheduling, and experimental configuration recommendations have been implemented. Among the recent improvements:

In keeping with the 120-day Study, NIF has set an even more aggressive goal of 400 shots in FY 2016. Achieving that goal while maintaining or increasing the number of cryogenic layered target experiments will require developing and implementing a third target inserter along with the current target positioner (Tarpos) and cryogenic Tarpos, Larson said. A third inserter would allow the Cryo Tarpos to remain dedicated to growing cryogenically cooled target layers, while a new multifunction inserter would support either warm, gas-filled targets or target diagnostics.

Larson said the 400-shot goal also will require a continued focus on completing shot-rate improvement projects and “fully implementing a shot planning process that allows experimental programs to maximize the data return from their time allocation.”