When NIF needed a way to safely patrol a dangerous high-voltage area, a team of University of California, Davis engineering students built SAPPHIRE the robot.

And when NIF needed an upgraded device strong enough to safely lift a 1,200-pound blast door, a group of Chico State University students designed and built that device. 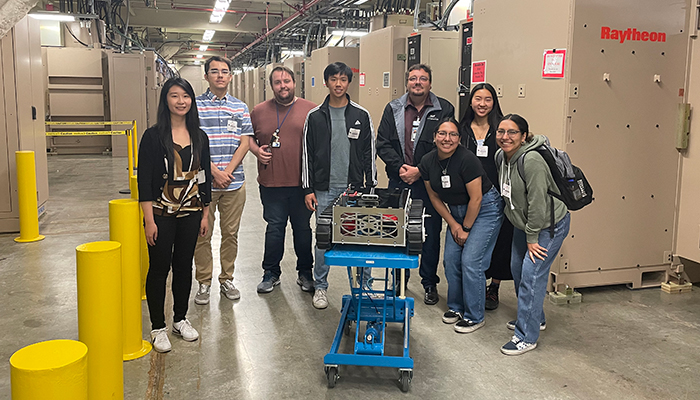 These needed devices—which also included a way to calibrate fast-moving magnetic fields—came out of a novel NIF-sponsored plan that strengthens LLNL’s pipelines to college engineering programs. In return, the participating students received valuable real-world experiences that go far beyond what they would learn in the classroom.

“It’s an incredible opportunity to have and just an invaluable experience that we all get before heading to industry to start our careers,” said Chico State graduate Jacob Corbin, who was part of the team that built the blast door lifting cart. “We were getting a master course in problem- solving and all our skills at problem-solving were really enhanced, especially on the fly.”

NIF engineers Bruno Le Galloudec and Evan Carroll co-administered the student projects. They had the idea to tap into college talent pools by offering a chance to build a hardware device for NIF as a senior capstone project—the intensive final project engineering students usually need to complete their degrees.

“Being able to create products that matter and improve the lives of not only the people in the Lab but also the country is very different from creating another phone app or selling a product for profit,” said the electrical engineering major.

In this video, SAPPHIRE the robot performs a demonstration at NIF

The robot will be used to check the status of power conditioning module control racks inside NIF’s two massive laser bays. Deep within those laser bays are four capacitor bays that store about 400 megajoules (MJ) of electrical energy. When an experimental shot is initiated, the capacitor bays deliver that energy to NIF’s 7,680 flashlamps, generating what eventually becomes 192 laser beams that are amplified and directed into the Target Chamber (see How NIF Works).

Because of the high-voltage hazards, the capacitor bays containing 48 modules each need to be closed off, making them inaccessible to human personnel for several days at a time. Each module has a control rack that contains high-voltage power supplies and other devices with LED status lights that “we can’t read from the control room,” Le Galloudec said.

“If we have an off-normal event in a capacitor bay, the last thing you want to do is open the door and go check,” he said.

SAPPHIRE is equipped with sensors, infrared cameras, and artificial-intelligence technology. “The robot will be sniffing, looking at breakers, trying to detect any early signs of failures, sniffing to see if there is any smoke, and warn us,” Le Galloudec said. “If it detects something that is out of the ordinary, like an error LED light on one of those power supplies, it will text us. Then we can avoid delays in the facility’s operation.”

SAPPHIRE is programmed to patrol autonomously but can be directed remotely from the NIF Control Room.

Park learned of the project from fellow engineering student Nicholas Newcomb—now a full-time LLNL employee—who worked on it during the previous school year. She became interested because it was more ambitious than other senior capstone projects that were offered. “I really wanted to do a project that I was going to look back on and be so proud of,” she said. 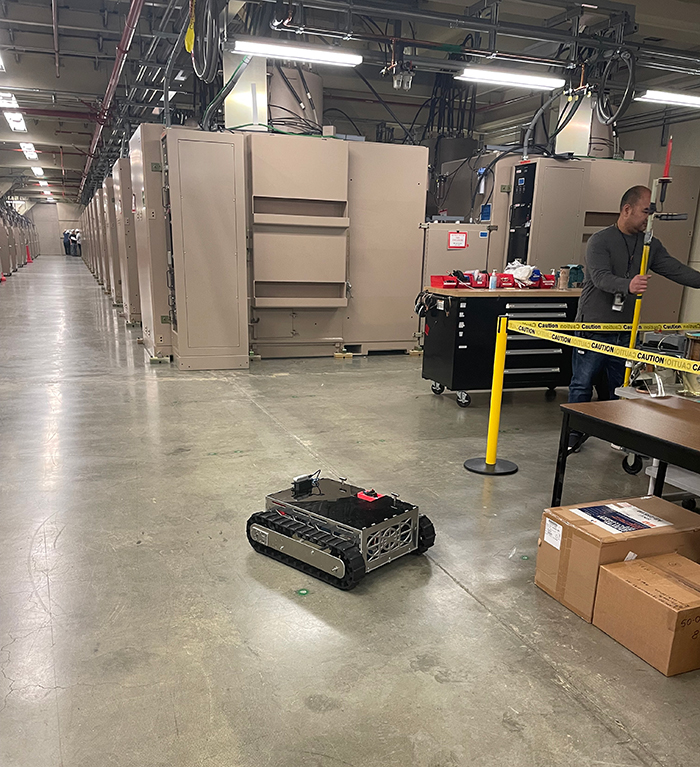 The acroynm for SAPPHIRE the robot was coined by laser physicist John Heebner. Credit: Jocelyn Park.

Park helped put together the SAPPHIRE team that included Dzmitrij Sysou, Devon Naomi Liu, Brian Shimabukuro, and twin sisters Vanessa Liera and Victoria Liera. By the end of the year, the team was able to successfully design and implement a robot that mapped the capacitor bay with sensors, diagnostic cameras, a customized graphical user interface, and a battery station.

Park worked on the robot’s diagnostic camera and manual controls, although she spent part of the year helping team members on various issues—including one that yielded a hard but valuable lesson.

In January, the team tested a fix for one issue, but had taken out a safety measure to make more room in the robot. That, in turn, accidentally led to an electrical short in a voltage regulator that fried the robot’s main computer—and the team lost data they hadn’t backed up.

“We definitely learned that safety measures are there for a reason and you shouldn’t take it out after you’ve implemented it,” she said. “That was a big ‘Oh my gosh, what are we going to do?’ moment. Even though we were stressed out for a really long time, it was a lesson we wouldn’t have had the opportunity to learn had we chosen a different senior design project.”

The team rebounded to repair the problems. The students also learned another invaluable real-world lesson: While Le Galloudec and Carroll were there for support, they “were really our customers, our stakeholders,” Park said. “We were building something for them. We had to listen to their needs. We weren’t just free to do whatever we wanted to do.”

The team brought a SAPPHIRE prototype to NIF in May to demonstrate that it could meet its safety and testing requirements. Park, who plans to graduate in March 2023, will serve as project manager for a new team of eight students she helped recruit to work on the third phase of the project, which aims to finish the robot next May. One of those students was an intern she met at the Lab.

Park spent this summer as a NIF & Photon Science Scholar doing optimization and imaging processing for the NIF Cryogenic Target Systems group. Shimabukuro has also been hired by the Lab.

Likewise, Corbin started a full-time job with NIF’s Laser Systems Engineering & Operations (LSEO) shortly after graduating from Chico State in May with a B.S. in mechatronic engineering and a minor in computer engineering.

NIF currently uses an extractor cart that grabs, lifts, and holds the 3/8-inch-thick doors off the modules to allow the NIF Operations team to safely perform inspections. 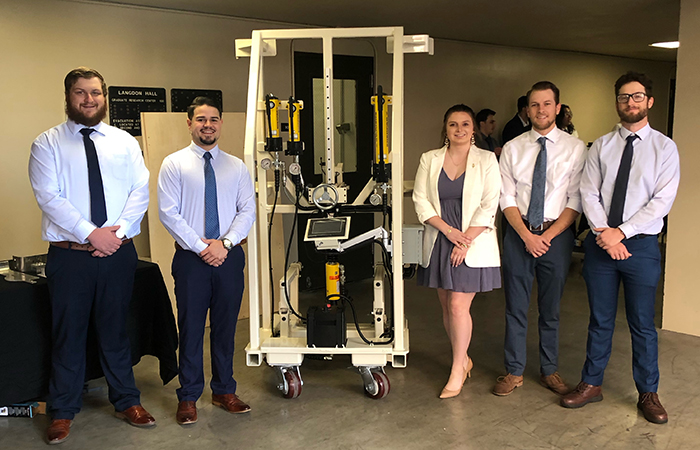 NIF has four capacitor bays and only three carts, which created a need for a fourth cart. This gave the Chico State students the opportunity to design an upgraded version with improved safety features, an embedded monitoring system, proximity and acoustic sensors, and a new user interface “so operations can do that process more efficiently and safer,” said Carroll, who graduated from Chico State 10 years ago.

“I knew how important it was for students to go through something like that to prepare us to be really good engineers,” he said. “You need to know theory and the math and all of that. But being grounded in a real hardware-based project as a senior capstone is that next level. It really rounds you out as a quality engineer.”

Corbin, who worked as a pastry chef for about 10 years before going back to school to try something else, said the project looked fairly straightforward at first.

“In the beginning it was like, ‘Oh, you just have to lift a door,’“ he said. But when the team dove into the project, they realized it was so much more complex. “On the surface, it looked really simple, but on the back end, it was complicated, lot of stuff to do, a lot of things to figure out.”

The device involved more than 500 parts, some that needed to be custom-made through a CNC (computer numerical control) turning and milling machine and others with a manual lathe. They had to adhere to NIF’s ultra-strict safety standards, create a self-contained on-board power supply to operate the embedded monitoring system for up to 13 hours, code the computer’s graphical user interface, and “overcome things when it didn’t fit together properly,” said Corbin, who served as project manager during the spring semester. 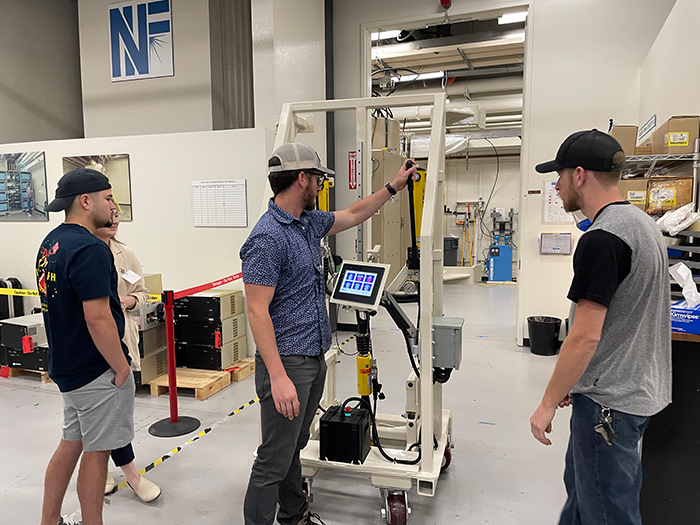 Eitel, who worked at a machining shop, also served as project manager. Bartlett spearheaded testing, while Westerband was the budget analyst. “This was a real-deal professional industrial project,” Corbin said.

What’s the biggest lesson the team learned? “That things take longer than you think they’re going to take,” he said.

The team built a successful prototype and also generated a complete set of working drawings so “we could order another one if we wanted to,” Carroll said. He estimated the cost of the prototype was six to seven times cheaper than it would have normally cost.

NIF also worked with a team from Cal Poly San Luis Obispo on a smaller device for calibrating fast-moving magnetic fields to be used as part of a program to magnetize NIF targets.

“We have these little probes that are based on miniature PCB inductor chips, so they’re very small solenoids about the size of a pea or even smaller,” Carroll said.

The Cal Poly SLO team designed an automated test stand to calibrate probes that have multiple chip sensors. “It can do 100 chips in a row,” said Carroll, who left LLNL in June. “That would take hours and hours for an operator like me to do manually.”

The success of these three senior capstone projects provided a “recipe” that Le Galloudec hopes to take to more colleges.

“Once we have the recipe to support these projects, there’s nothing stopping us from going to other schools that have expertise that is important to us and find new students and professors to work with,” said Le Galloudec. “It’s been a really great way to recruit students and build networking pipelines between different schools.”