Celebrations commemorating the National Ignition Facility’s historic first decade of operation were imbued with one central theme: the dedication of its personnel. Without the hard work of employees pushing NIF to greater heights every day, the facility would only be a building.

“Team NIF has repeatedly proven itself to be an agile, responsive workforce ready to adapt to an ever-changing environment,” said Lisa E. Gordon-Hagerty, DOE Under Secretary for Nuclear Security and Administrator of the National Nuclear Security Administration.

“And NIF has vividly demonstrated the value that can be created when our elite workforce is able to work in a state-of-the-art facility,” she added. 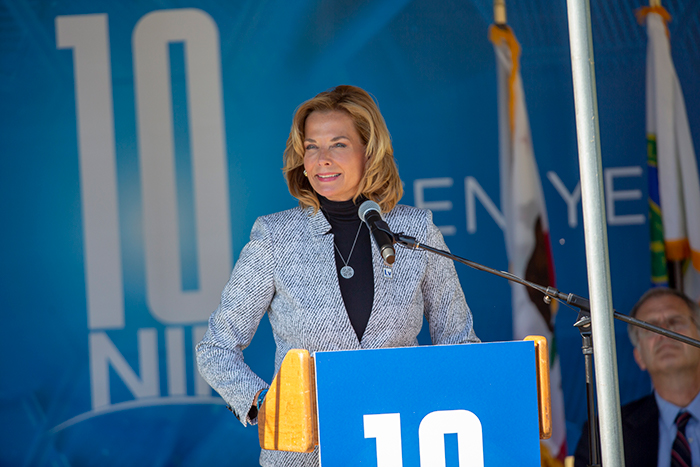 Gordon-Hagerty was one of several dignitaries and elected officials who spoke at an August 13 event attended by approximately 700 NIF employees, alumni, and supporters.

Employees both past and present were thanked for their contributions to NIF’s missions of helping to ensure the nation’s nuclear stockpile is safe, secure, and reliable, and to advance high energy density science.

“It is clear that the National Ignition Facility and Photon Science staff epitomize what we are trying to achieve across the nuclear security enterprise,” Gordon-Hagerty said.

She called NIF an “engineering marvel” that helps in recruiting new generations of top scientists and engineers. 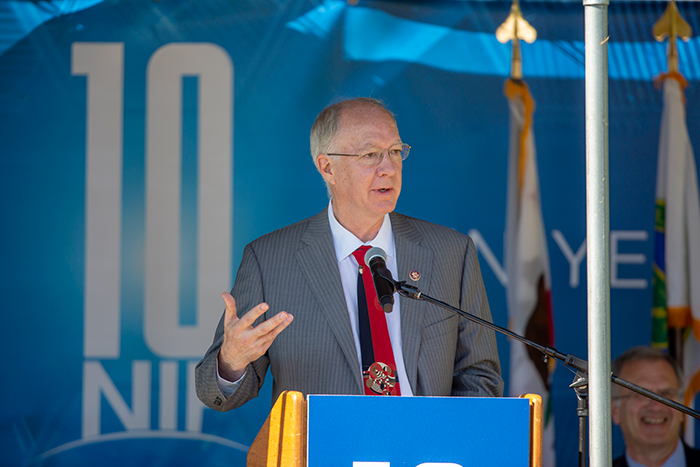 “In addition to providing crucial data needed to maintain our nuclear deterrent, NIF is a classroom where the stewards of tomorrow will build a deep set of skills and understanding of the very building blocks of our universe,” she said. “It also offers researchers opportunities in cutting edge lasers and fiber optics and other fields as well as a chance to make big breakthroughs vital to U.S. energy security. And if all this wasn’t enough, we can always remind our potential recruits that NIF was the set of a Star Trek movie and that usually seals the deal.”

Foster, D-Illinois and co-chairman of the house National Labs Caucus, noted that while achieving ignition has been “more challenging than originally hoped,” he and his colleagues realize “there’s important science going on here.”

“Although NIF has yet to achieve ignition, Congress still loves you,” Foster said. “Congress has come to understand that NIF has brilliantly succeeded in meeting its technical goals of delivering unprecedented laser power with incredible precision to a tiny region.”

Foster is a former particle physicist at Fermi National Accelerator Laboratory in Illinois.

“The great science that continues to come out of NIF will continue to have great payoffs, both for the national security and stockpile stewardship mission and for a broad array of science from high energy density physics to laboratory astrophysics,” he said. “Congress understands that, too.” 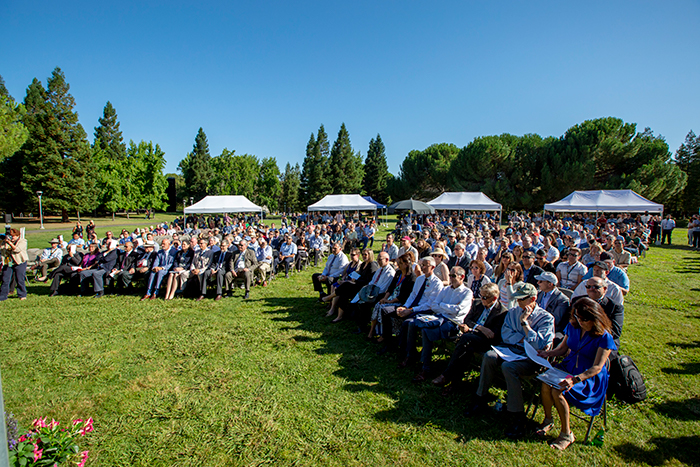 Lofgren, D-California, noted that she attended both NIF’s groundbreaking and grand opening ceremonies. She said members of the labs caucus would continue to “stand up for you scientists so you can do the work that will serve the nation and serve the world.”

“In addition to the absolutely essential weapons testing provisions,” Lofgren said, “the science is very important.” 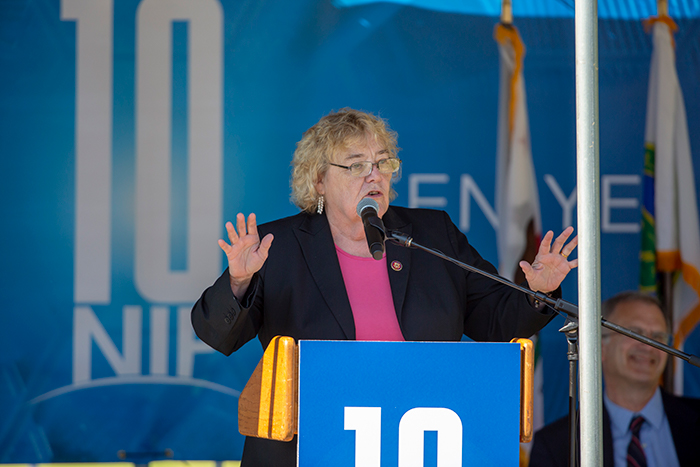 Rep. Zoe Lofgren thanks NIF for serving the nation. 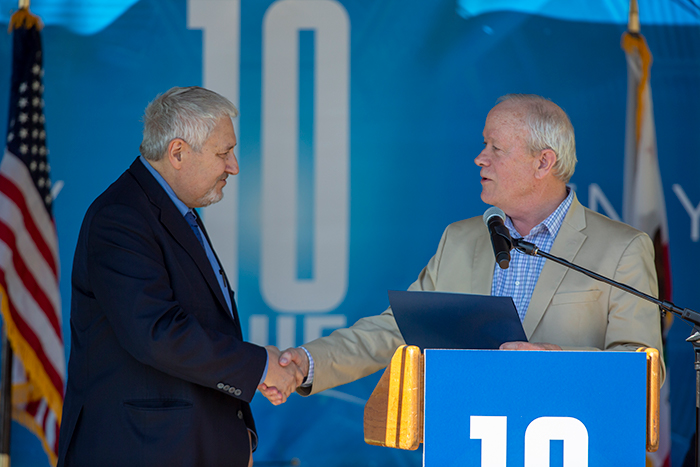 “We will be on your side,” McNerney said. “We will have your back in Congress.”

Video: What’s It Like to Work at the National Ignition Facility.

Budil, who began her career as staff scientist in LLNL’s laser program, commented that the event had “the distinct aura of a nerdy class reunion.” In leading LLNL’s WCI directorate, her programs rely on data from NIF experiments to inform stockpile stewardship decisions.

“As the world changes, the challenge of maintaining our nuclear deterrent without nuclear explosive testing will get harder. It will require better science, better tools and capabilities, and new ways to train and test our stewards. NIF is excelling in each of these categories,” she said. “NIF represents what this laboratory does best: first-of-a-kind, one-of-a-kind, cutting-edge research and engineering.” 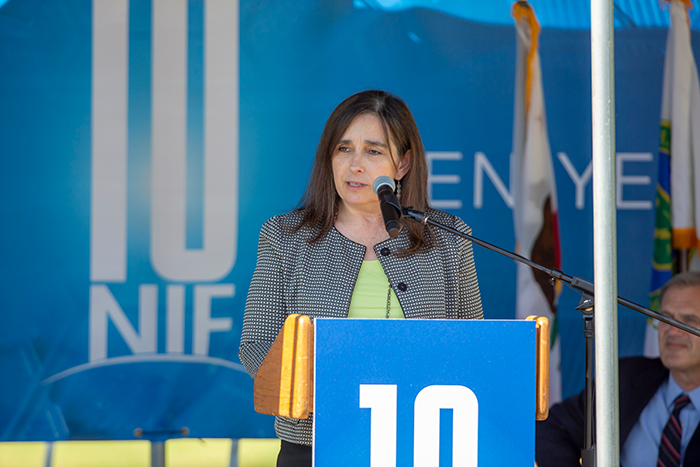 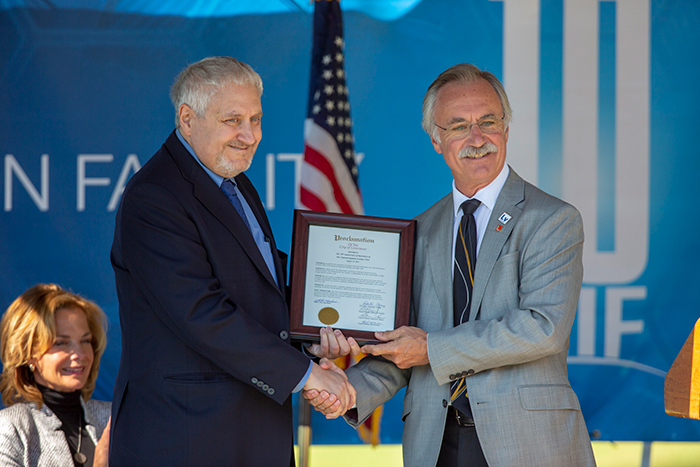 “None of these achievements would have been possible without the people who wake up every day and dedicate their careers to NIF,” Wisoff told the crowd. “NIF is the people, NIF is you. Your commitment and creativity are what has allowed us to succeed. Thanks for all you have done to help NIF deliver for the Laboratory, for the NNSA, and for the nation. I look forward to seeing what the next ten years will bring.”

Later that day, Wisoff kicked off a separate event for NIF employees by saying he wanted to reflect on how the “world’s largest and most fantastic laser” is “a special place” to work.

“It’s often easy to forget how special working at this Laboratory is,” he said. 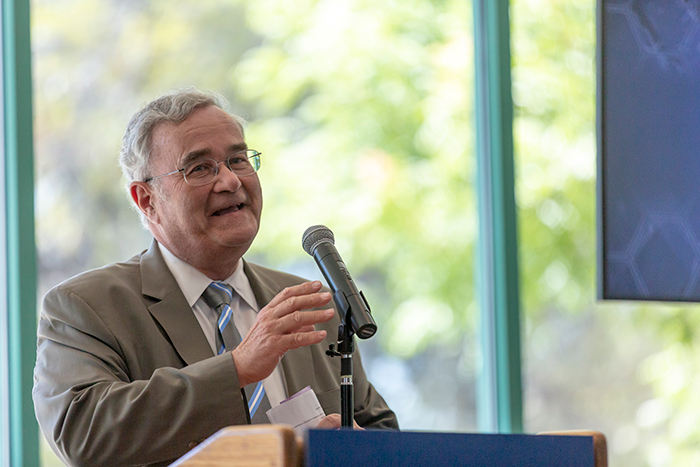 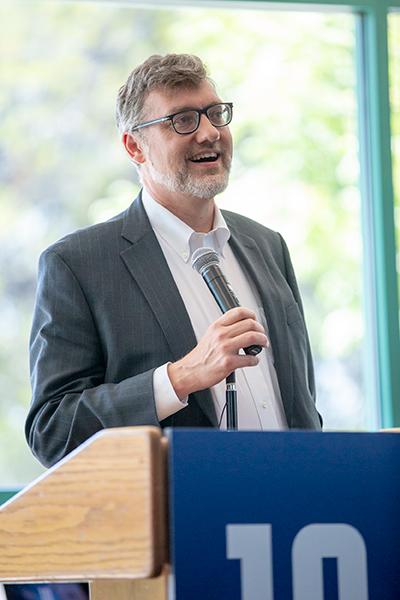 Deputy LLNL Director Tom Gioconda said the 10th anniversary of NIF provided a good opportunity to learn about and remember the “bravery and vision” it took to create NIF.

“There was a lot of planning to build a one-of-a-kind facility,” he said.

But he also asked employees to keep in mind what’s going on in the present “and then look to the future. Have all three of those views (past, present, future). I think that will be the secret of NIF going forward.”

The event followed a day-long symposium about NIF on Aug. 12, with briefings on topics that included Discovery Science breakthroughs, NIF’s effect on nuclear deterrence, and what the next 10 years may hold. 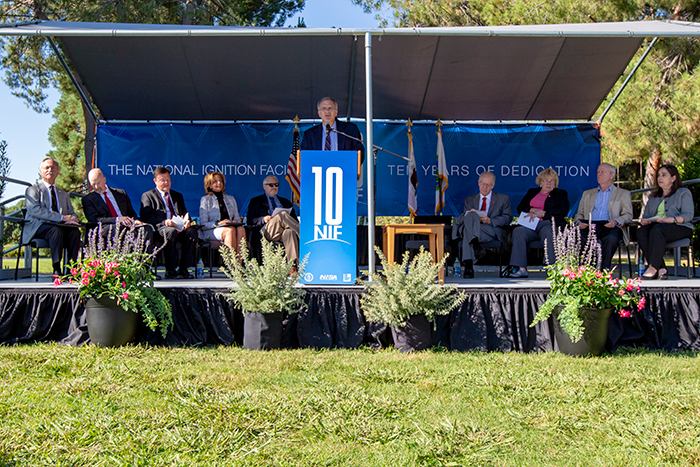 Wisoff thanks employees for their “commitment and creativity.” 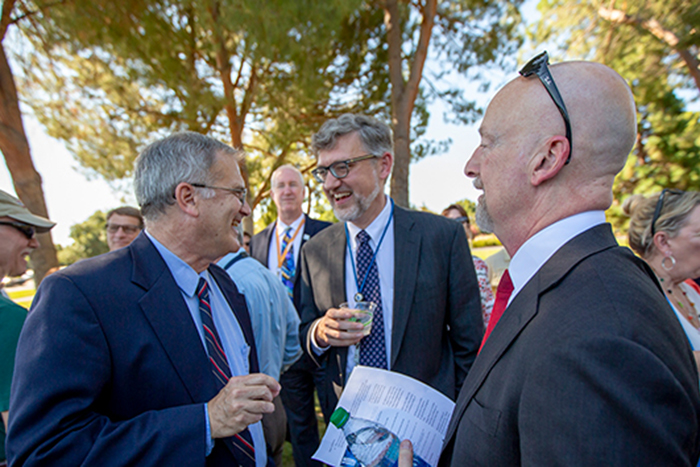 NIF’s Wisoff and Herrmann chat with the NNSA’s Mark Anderson.