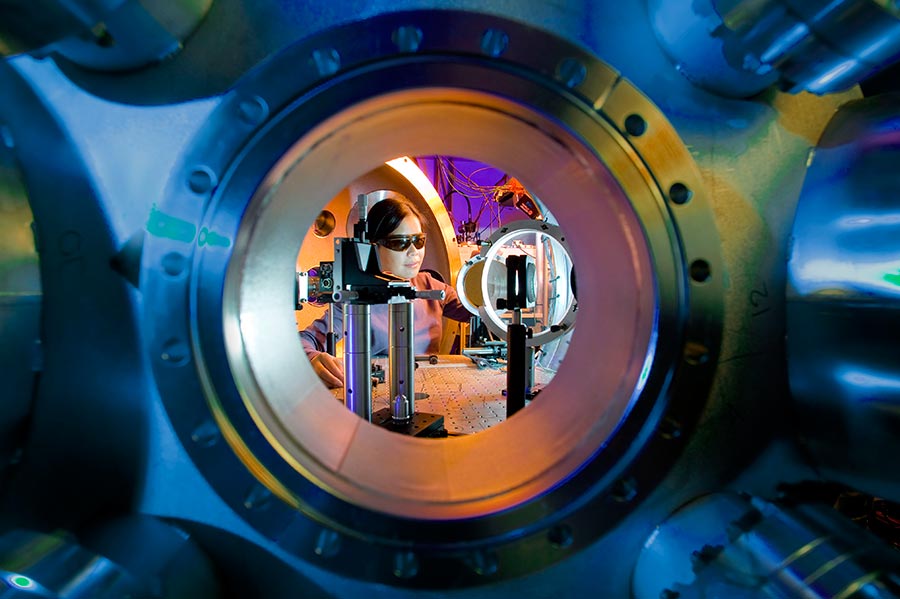 The commissioning of the Titan Petawatt-Class laser to LLNL’s Jupiter Laser Facility (JLF) has provided a unique platform for the use of petawatt (PW)-class lasers to explore laser-matter interactions under extreme conditions. The JLF includes the Janus, Callisto, Europa, Titan, and COMET lasers and associated target chambers (see Laser Facilities).

Commissioned in 2007, Titan was the first to offer synchronized operation of both a short-pulse PW beam and a long-pulse kilojoule beam for experiments. Research at Titan covers the broad topic of HED Laboratory Plasmas. Many experiments are carried out by collaborative teams from LLNL and other research institutions including universities as part of the JLF User Program.

LLNL’s Institute for Laser Science Applications (ILSA) facilitates academic collaborations involving one or more of the JLF laser systems. ILSA’s mission is to strengthen the research interactions in the field of high energy density (HED) science between LLNL and the academic community. As part of this mission, ILSA helps foster access for students and faculty to existing LLNL experimental facilities in order to facilitate training and research for university students and faculty in areas important to the Department of Energy in HED science with lasers.

Academic researchers are encouraged to visit the JLF Website and ILSA Website for updates on opportunities for collaborations for HED science experiments using the JLF capabilities. For example, the first experimental short-pulse/long-pulse campaign on Titan consisted of experiments by an academic user group.

Along with the University of Rochester Fusion Science Center, ILSA is a co-sponsor of the High Energy Density Physics Summer School. The HEDP Summer School is designed for undergraduate seniors, graduate students, postdocs and researchers who want to enter, or advance their knowledge in HED physics. The HEDP Summer School has been held every odd year since 2005 at the following campuses: Ohio State (2013), University of California San Diego (UCSD) (2011), UCLA (2009), UCSD (2007) and UC Berkeley (2005). ILSA’s co-sponsorship has helped provide on-line Proceedings for the Summer Schools.

The Janus and Titan Laser Systems

Of the five JLF laser systems, Janus, as a kilojoule-class Nd-glass laser system, has been the backbone of the JLF User Program since the beginning of Fiscal Year 2005. Each of its two beams (East and West) is capable of producing 200-picosecond to 10-nanosecond pulses (full width at half maximum, or FWHM) with energy ranging from 200 joules to about one kilojoule at a wavelength of 1,053 nanometers (infrared). Conversion efficiency is greater than 50 percent in green-light operations at a wavelength of 527 nanometers.

Titan features a short pulse petawatt-class beam and a long-pulse kilojoule beam in a newly refurbished target area. The SP beam is derived from the Janus West beam by replacing its nanosecond oscillator front end with an Optical Parametric Chirped Pulse Amplification (OPCAP) seed pulse and amplifying the chirped pulse with the Janus chain (a chirped pulse is an ultrashort laser pulse stretched out temporally and spectrally prior to amplification). The amplified chirped pulse is then compressed in a grating compressor using a pair of 40 × 80-centimeter multi-layer dielectric gratings.

Titan’s SP beam is capable of producing a 1,053-nm pulse of 400 femtoseconds to 10 picoseconds (FWHM) with energy of 350 to 530 joules. The SP beam is injected into a roughly three-meter-diameter target chamber, where it is focused onto targets with an f/3 dielectric coated parabola. Titan’s LP beam is the Janus East beam that is transported into the Titan target area and injected into the target chamber using an articulated arm at different orientations.