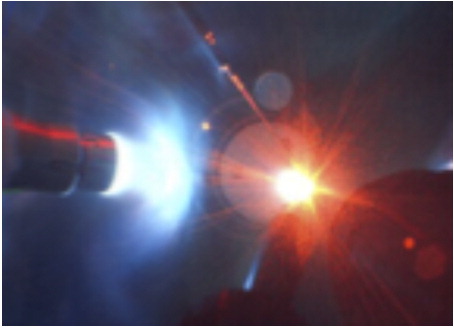 “Laser” is an acronym for light amplification by stimulated emission of radiation. A laser is created when the electrons in atoms in special glasses, crystals, or gases absorb energy from an electrical current or another laser and become “excited.” The excited electrons move from a lower-energy orbit to a higher-energy orbit around the atom’s nucleus. When they return to their normal or “ground” state, the electrons emit photons (particles of light).

These photons are all at the same wavelength and are “coherent,” meaning the crests and troughs of the light waves are all in lockstep. In contrast, ordinary visible light comprises multiple wavelengths and is not coherent.

Laser light is different from normal light in other ways as well. First, its light contains only one wavelength (one specific color). The particular wavelength of light is determined by the amount of energy released when the excited electron drops to a lower orbit. Second, laser light is directional. Whereas a laser generates a very tight beam, a flashlight produces light that is diffuse. Because laser light is coherent, it stays focused for vast distances, even to the moon and back.

In NIF, as in most large lasers, intense flashes of white light from giant flashlamps “pump” electrons in large slabs of laser glass to a higher-energy state that lasts only about one-millionth of a second. A small pulse of laser light “tuned” to the excited electrons’ energy is directed through the glass slabs. This laser pulse stimulates the electrons to drop to their lower, or ground, energy states and emit a laser photon of exactly the same wavelength.

An optical switch traps the low-energy laser pulse in the main amplifier for four passes through the laser glass slabs. Mirrors at both ends of the glass amplifier cause the photons to travel back and forth through the glass, stimulating more electrons to drop to their lower energy states and emit photons. This process produces huge numbers of photons of the same wavelength and direction—an extremely bright and straight beam of light. In this way the initial low-energy pulse is amplified by more than a quadrillion times to create 192 highly energetic, tightly focused laser beams that converge in the center of the Target Chamber.

Lasers can be tiny constituents of microchips or as immense as NIF, which is ten stories high and as wide as three football fields. Lasers are found in a dazzling range of products and technologies, including CD and DVD players, metal-cutting machines, measuring systems, and eye and cosmetic surgery. Early lasers could produce peak powers of some 10,000 watts. Modern lasers can produce pulses that are billions of times more powerful. Scientists have demonstrated NIF’s ability to generate more than 500 trillion watts of power.

Laser light does not need to be visible. NIF beams start out as invisible infrared light and then pass through special optics that convert them to visible green light and then to invisible, high-energy ultraviolet light for optimum interaction with the target.