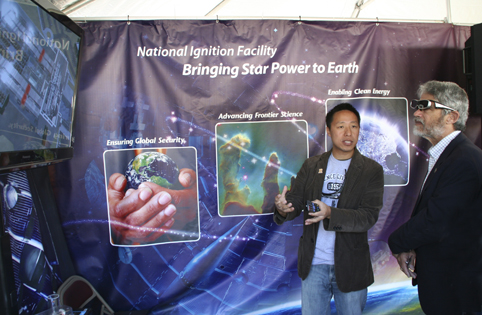 At the Science on the Mall event in Washington D.C., Zhi Liao (left) gives John Holdren, President Obama's science advisor, a virtual tour of NIF with the help of 3D technology.

An immigrant from China and the first college-bound member of his family, Zhi Liao puzzled over choosing a career. Career preference tests in high school indicated he would make an ideal air traffic controller, so he headed to college with that suggestion in mind. However, it took a junior-year summer internship at Lawrence Livermore in laser optics for Zhi to find an enduring vocational passion. "Until my internship, I didn't know what it is to be a laser scientist," says Zhi. "As a summer intern, I was inspired to learn more, and I wanted to come back to have a career in LLNL." He came back to do research at Livermore twice more while working toward his Ph.D. in optics, and the third time to stay, as a staff scientist at the National Ignition Facility.

Zhi says with a grin, "When I came here to get a job, my dream came true. How cool is that?" His enthusiasm and energy is infectious, and it is unsurprising to learn that Zhi has a talent for inspiring and encouraging others to pursue careers in laser science. His love of lasers rubbed off on his younger brother, who also studied lasers at the University of Rochester and now works on laser optics for Northrop Grumman. And these days, Zhi frequently represents NIF and leads laser demonstrations at community and student science outreach events, including the 2010 Science Expo on the National Mall event in Washington D.C.

Zhi also manages the Student Internship Program for NIF and hosts his own summer students. As he helps match students with projects, Zhi works to ensure that internships are formulated to benefit both parties. "We need to make sure that the projects are appropriate for both the mentor and student," says Zhi. "A balance is required to keep the students interested and productive." Like many mentors in the program, Zhi sees hosting students as a way to help train future scientists and give others a similar experience to the one that he received as a summer student.

Zhi's own research focuses on modeling optics damage. NIF is the largest optical instrument ever built, with some 7,500 meter-sized optics and more than 26,000 smaller optics—totaling nearly an acre of precision optical surface—working together to create laser light out of ordinary light, steer the beams, and focus the laser light to the center of the target chamber. NIF's high-energy laser beams are essential for creating fusion ignition conditions, but even the best man-made objects cannot withstand this level of laser intensity without eventual damage. As Zhi explains, "You can't hide the optics from the laser. They are needed to focus, condition, and change the color of laser light, so you have to manage the damage."

"What we do is study the interaction between the laser and the optic in order to develop a model that can help predict laser-induced damage on optics so that you can plan and manage the process," Zhi notes. Laser optics damage has been studied for several decades, but as lasers have increased in intensity, predicting, tracking, and mitigating damage sites has become more challenging—and more crucial. Optics defects, if undetected and unchecked, could impact laser performance and experimental results.

With thousands of optics and multiple potential damage sites on each optic, predicting when and where a defect will form and grow is a tricky task. Zhi hopes to tackle this challenge by combining experimental data with advanced probability and statistics. Rather than testing all of the damage parameters in the lab, which might take years, this method would use machine learning to teach the computer the parameters and then allow it to make predictions. Zhi says, "That's the next revolution. This is sort of out of the realm for laser physicists, but I want to use whatever techniques work."

Zhi's inventiveness and passion for research have already resulted in a patent and an R&D 100 award for helping to develop a more efficient and compact converter crystal for coloring laser light. An R&D 100 award was a personal goal and challenge Zhi put to himself not long after coming to the Laboratory because "scientists that I admired all had R&D 100 awards, so it was a goal that I set for myself to get one, at least one." But the larger reward for Zhi is simply the work itself. "Trying to do something that no one's done before is my motivation. If I were to win the lottery, I'd hope to still keep my job here," he admits. "They can't pay me enough not to do the work!"

As much as Zhi enjoys his job, he also relishes free-time pursuits that include food, wine, and sports. His wife and he enjoy wine tasting and hosting dinner parties. A self-described "sports guy," he regularly plays basketball at the Laboratory, a sport he picked up as a student. He also takes part in soccer or flag football leagues on the weekends. Ever the optimist, he notes that unlike in his student days in snowy Rochester, here he can play sports all year long.

For this physicist and math enthusiast who once aspired to be an air traffic controller, interning at Livermore was a defining career moment. Working on the world's largest laser and doing his part to assist NIF in achieving fusion ignition is, for Zhi, "to be part of history."