An Enduring Fascination with Light 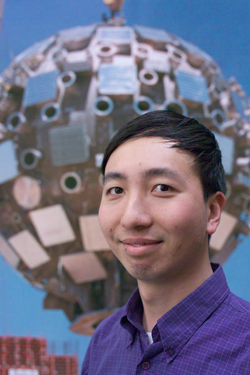 As a child, Sheldon Wu was fascinated by science, especially astronomy. In one of his earliest optics experiments, he refracted sunlight into a rainbow using a tub of water and a mirror. His interest whetted by this early exploration of light’s properties, Sheldon has gone on to pursue a career in laser physics, modern optics, and optical physics. As a graduate student researcher, Lawrence Scholar, postdoctoral scholar, and now staff scientist in the NIF & Photon Science Directorate, Sheldon has contributed to a variety of original, cutting-edge research projects under way in the Directorate.

Sheldon’s career at LLNL began with a chance e-mail he received on LLNL research opportunities for graduate students. Then an optics graduate student at UC San Diego, Sheldon followed up on the e-mail and soon arranged to assist NIF and Photon Science scientist Ray Beach with developing the Laboratory’s diode-pumped alkali laser. While working on the laser project, Ray encouraged Sheldon to apply for a Lawrence Scholar Program award, a competitive fellowship program designed to attract the best graduate students from across the United States to conduct research at the Laboratory while completing their theses. Sheldon was named a Lawrence Scholar in 2008, the program’s inaugural year.

The alkali laser was first proposed more than four decades ago, but creating such a laser proved impractical, as no light source was available to pump it efficiently. The situation changed in the early 2000s, with the availability of a new diode source for pumping. By combining the laser diode array technology with other innovations, LLNL scientists invented a new class of lasers that combines features of both gas and solid-state lasers—the diode-pumped alkali laser. Sheldon explains that this type of laser efficiently generates a very high-quality, high-power laser beam optimum for sending laser energy long distances. As a Lawrence Scholar, Sheldon helped Ray demonstrate the first optically pumped, hydrocarbon-free, alkali laser.

Since Sheldon became a postdoctoral researcher, much of his research has been focused on mono-energetic gamma-ray (MEGa-ray) source technology. The MEGa-ray light source is much like a laser, but it generates gamma rays (very high photon energy light beams) rather than a visible light beam. A MEGa-ray pulse—many times brighter than any other man-made light—can detect and image specific nuclei in objects containing a variety of isotopes, providing an important new tool for nuclear physics. The design of MEGa-ray is still evolving, and currently, Sheldon’s focus is on optimizing the brightness of the gamma-ray source. “It is an exciting project,” Sheldon says, “and the theory is fascinating. I look forward to seeing MEGa-ray built and in operation.”

While most of Sheldon’s work involves battling equations and perfecting models, he also contributes to two Laboratory Directed Research and Development (LDRD) projects that take him out of his office and into the laboratory. One examines how different materials interact with light. Another project involves designing and constructing an inverse free-electron laser. While a conventional free-electron laser uses electron beams to stimulate photons, this method of accelerating particles uses photons to accelerate beams of electrons. “We think this project will lead to more compact, efficient accelerators,” Sheldon says.

For Sheldon, NIF and Photon Science has been a great place to work. “I like the people. I work with interesting projects. And the support is great—we have fantastic technicians,” Sheldon notes. Though he is not involved directly in the effort to achieve ignition on NIF, as a laser scientist Sheldon fully appreciates its importance: “Ignition is such a significant step in science. I am proud to be working at the place where ignition research is being done.”

In the rare moments when he’s not working, Sheldon enjoys jogging, biking around town, and tending his garden.