A Can-Do Attitude about Life 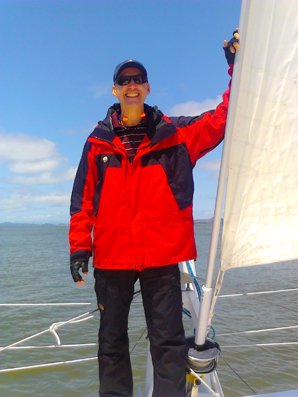 It is quickly clear that Mark Bowers, optical systems project associate manager, loves learning and sharing knowledge with others, both on and off the job. His enthusiasm allows him to enliven even typically dull events such as weekly safety meetings. Knowing that the best way to encourage attendance and disseminate important information at the weekly meetings he leads was either to bribe his audience with food or keep them engaged in the material, Mark arranged for lively guest speakers to present on relevant topics. The popular meetings now easily fill the auditorium in which they are held.

As the person in charge of optical engineering and design for the giant NIF laser, Mark's job is primarily managing people. He oversees the work of almost 100 people in the areas of optical target diagnostics, laser diagnostics, small optical systems, the master oscillator system, and laser and target alignment. Responsibility for all of these areas requires a deep knowledge of optics, but just as importantly, a good understanding of people. "My main goal is to hire really smart people, and I think I have done a good job at that," Mark notes. "It makes my job much easier."

Mark's career path was sparked by a fascination with lasers, but bolstered, improbably enough, by his interest in flying. After high school, Mark briefly trained as a charter pilot, but soon realized he felt like "a glorified bus driver"; his dissatisfaction with flying as a career gave him the initiative to pursue higher education in the sciences. After earning his master's degree in electro-optical engineering at the Georgia Institute of Technology, he joined LLNL in 1987. Later, he returned to school for a Ph.D. from the University of Rochester's highly regarded Optics Institute.

Mark says he "straddles the fence" between engineering and physics, and at the Laboratory, he has had a chance to apply his interest and expertise in both fields. He worked on a number of underground nuclear testing and remote detection system projects until he was recruited by NIF in 2000, for what was initially intended as a one-year assignment. Here he has been ever since. One of the highlights of Mark's time at NIF has been designing and refining the injection laser system. This crucial system, which includes the master oscillator room and preamplifier modules, is responsible for generating the desired laser pulse shape, precisely delivering the right amount of energy at the right time for each experiment.

Another high point for Mark has been working on NIF's timing system. Ensuring that all 192 beams arrive at the target at the prescribed time is achieved by using a precise timing system that is constantly monitored and updated using integrated software and hardware to maintain accuracy. Mark has also enjoyed contributing to the development of the Advanced Radiographic Capability diagnostic. While this complex short-pulse laser capability has not yet been deployed at NIF, Mark notes that the work has been both interesting and challenging.

Despite a daunting array of work responsibilities, Mark makes time for his hobbies, which include sailing and caving. Mark and his wife started taking sailing lessons in 2007. Though they often sail in nearby San Francisco Bay, what they especially enjoy is renting a sailboat for a week or two in an exotic destination. Exploring Grenada or coastal Belize by boat, for example, has provided them with a unique perspective on a new place and culture. Sailing also feeds Mark's love of learning, as he continues to take advanced sailing classes and hone his skills. In 2010, Mark and his wife took a memorable sailing course in French Polynesia that required crossing 400 miles of open ocean and passing tests on celestial navigation and other topics. When on dry land, Mark can often be found underground, exploring caves. He shares his knowledge of cave safety and rescue techniques in the classes he teaches across the nation, and occasionally, abroad.

Mark is as passionate about his work as he is about his hobbies. What he appreciates most about NIF, he says, is the "can-do attitude" everyone shares. "We keep doing what people think is impossible," Mark says, "whether it is meeting our goals in laser energy, pulse length, compression, diagnostics, or other areas. Time after time, we just keep going forward and doing it."