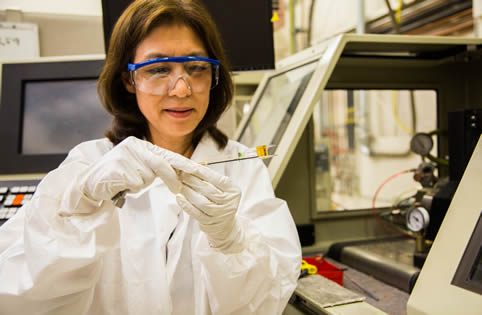 When Hye-Sook Park was trying to decide on a major in college, she asked her friends, “What is the most challenging thing out there?” “Physics” was the response, and that was all Park needed to hear to launch a scientific career that has produced significant breakthroughs in astrophysics, laser-plasma physics, applied physics, and much more. In the process, Park has overcome social preconceptions and cultural boundaries and established herself as a leading experimental physicist with an international reputation.

Park attributes much of her tenacity and drive to parental influences. She was born in South Korea at a time when much of the country was overcoming financial struggles and economic hardships. Many families relied on the men to provide for the family, while the women took on the traditional roles of housekeeping and care-giving. But with the support of her family, Park strongly felt the need to move beyond those boundaries and pursue broader interests. “There was not much money to do anything,” she recalls, and it was this, among other circumstances, that drove her to seek an education in America; she knew that would be the key to her success and her future.

Both frightened and excited, Park began her career-seeking journey at the age of 21 with a one-way ticket to the United States. She enrolled in Pfeiffer University (previously Pfeiffer College) in Misenheimer, North Carolina, a United Methodist school with only a few hundred students at the time. Thanks to her affiliation with the United Methodist church and connections with other missionaries, Park attended on a full scholarship and began working toward her educational goals in physics.

Park embraced the challenge of being the first Asian student at the college and remembers that “friends and teachers were very nice to me.” She recalls that shortly after arriving at Pfeiffer, her roommate took her to a Chinese restaurant after seeing Park going without food for a week. Park remembers how bad the food was, but even more, how homesick she really was.

With a desire to attend a larger, more prestigious university and the wish to be self-sufficient, Park completed her undergraduate studies in just a year by receiving good grades, participating in cultural activities, and attending summer classes. She then began her graduate degree program in high-energy particle physics at the University of Michigan in Ann Arbor.

Among her many firsts as a female, Park played a pivotal role in the IMB Proton Lifetime experiment, a joint venture of the University of California, Irvine, the University of Michigan, and Brookhaven National Laboratory. A detector designed to find evidence of proton decay was built in an underground salt mine 2,000 feet below Lake Erie. The detector, a 20x20x20-meter water tank, was placed underground to shield against bombarding cosmic rays on the surface. Working in the salt mine was physically demanding, often requiring 16-hour days and three-hour drives back to Ann Arbor.

Even though the project did not succeed in its primary goal of detecting proton decay—a key element in theories that unify all the particles and nearly all the forces in the universe—IMB won fame in 1987 as the first detector to capture weakly interacting neutrinos from a supernova explosion (known as SN1987A) in a neighboring galaxy. Park says the IMB experience fit her preference for “very precise, detail-oriented, logical work.”

After receiving her Ph.D. in 1985, Park spent her postdoc career at UC Berkeley, developing a detector with sub-charge detection capabilities that searched for stand-alone quarks that could only exist under extreme conditions of relativistic heavy ion collisions (called the quark-gluon plasma state). While this project didn’t detect stand-alone quarks, she says she feels lucky to participate in such exciting research.

Park’s first job at LLNL was working on the Strategic Defense Initiative, or “Star Wars” program. She was asked to invent a telescope with a digital detection system. “Digital cameras didn’t exist at that time,” she says. But working with algorithms, software and hardware, she delivered a prototype with a 60-degree-wide field of view that was able to track satellites in real time.

Mapping the Dark Side

Park continued to work on small camera detection systems and satellites, one of which went to the moon to map geological properties such as the composition of lunar rock. The satellite, nicknamed Clementine, was the first to map the north and south poles as well as the dark side of the moon.

She worked with NASA scientists to produce scientific results from the data from six different styles of cameras on the satellite. “A lot of this technology has been transferred to the commercial side,” she says, “such as our cell phones and mapping the Earth’s surface, so that you now can view your own house on the Google Maps program.”

Returning to astrophysics, Park participated in other notable experiments including the Gamma Ray Burst project, in which she used a telescope that was developed as a prototype for “Star Wars” to help capture gamma-ray bursts at different wavelengths and to analyze the full spectrum of the events. Along with a colleague from NASA/Goddard, Park developed the algorithms needed for the telescope to respond quickly to the bursts; the algorithms still are being used today in space and ground telescopes around the world. Eventually, this new technology helped the scientific community determine that gamma-ray bursts were not happening within our galaxy, but instead originate from extra-galactic sources.

Due to limited funding, Park decided to switch gears in 2003 and work in laser-plasma physics, an area she knew very little about, but another challenge she was willing to face. “High energy density physics was just starting to be talked about” among her peers, Park says, and she felt she could contribute to the program in some way. She began working with short-pulse lasers and tried to wrap her brain around the idea of high-energy x rays emitting from these short pulses, something that had never been seen before. Park was introduced to new diagnostics and learned about laser experiments on her own for several years, and eventually became the “high-energy backlighter matter expert,” she says. 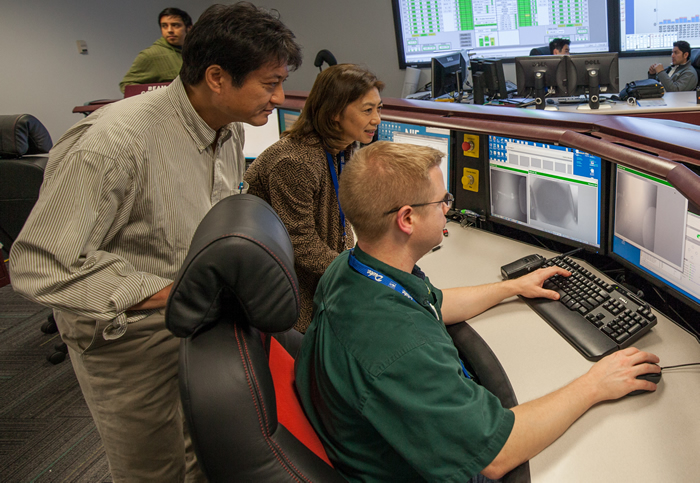 Osaka University physicist Dr. Youichi Sakawa (left), Hye-Sook Park, and alignment operator Daren Hart prepare for an experiment in the NIF Control Room. The experiment was in support of an international collaboration looking at the nature of collisionless shocks, which are responsible for the properties of many astrophysical phenomena including supernova remnants, gamma-ray bursts, jets from active galactic nuclei, and cosmic ray acceleration. Credit: Jason Laurea

Park admits that her decision to come to NIF was “a big change and a big challenge” for her, yet it has been “very rewarding.” Every aspect of every experiment had to be carefully thought through—from the physics to the target design to the diagnostics—and often the experiment had to work on the first attempt, since laser shot opportunities are scarce and fabricating the targets is difficult and time-consuming. Park says she became “notorious” for requesting complicated targets to be built, yet the Target Fabrication Team welcomed the challenge; the results always were unique and considered to be cutting-edge in that field.

Park is involved in many experiments on NIF in which numerous firsts have to be worked out; in 2010 she was named a Fellow of the American Physical Society for developing “seminal experimental techniques to create and probe plasmas with extreme density and temperature.” She especially enjoys working with the younger scientists in her group; she encourages them to become leaders on any project they undertake.

Today Park fills her days with participating in programmatic experiments and studying material properties using NIF’s unique ability to generate extreme pressures on material samples (see “Experiments Test High-Pressure Material Response”). While most of her work is programmatic, she is able to dip back into astrophysics experiments on NIF from time to time. “I’m always trying to understand the ‘how’ and getting back to the basics of micro-physics,” she says, “and trying to understand magnetic field generation in the universe using the NIF laser.”

In choosing physics as her career, Park says, she wanted to prove that women could break out of their traditional roles—a decision that required both courage and determination. As she advises her daughter, also a physicist, “Don’t be scared, don’t be afraid of the challenge or other projects.” And with her intuitive insights and experimental leadership and discoveries, Park continues to set the pace for scientists of both genders.

Even with her demanding schedule, Park makes time for networking among her peers and getting involved in conferences and giving talks when time permits. On days that aren’t filled with experiments or other work, she enjoys her lifetime avocation of sitting down and playing the piano.